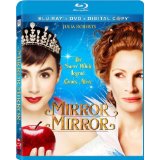 Mirror mirror on the wall, which is the fairest Snow White movie of them all? (Or at least 2012.) Well, if we’re going by box office receipts and critical reception, the winner is Snow White and the Huntsman, the gothic, snarlier twist on the classic tale starring Kristen Stewart (everything starring Stewart is automatically snarlier), Charlize Theron and Chris Hemsworth. However, if we’re going by costumes, production design and general shiny-ness, Mirror Mirror easily wins. I realize that sounds like faint praise, but this family-friendly take on Snow White has its quirky charms.

Julia Roberts headlines this version as a wicked Queen who is fond of lavish parties and elaborate gowns, but rules over a frigid, destitute kingdom following the disappearance of the popular king she married. Snow White (Lily Collins), on the cusp of her 18th birthday, is the king’s daughter and the rightful heir to the throne. After the jealous Queen tries to have Snow White murdered, the exiled princess enlists the help of a noble prince (Armie Hammer) and seven outcast dwarves to take back her kingdom.

I’m not going to beat around the bush: this movie has several moments that will make you roll your eyes and groan out loud at the same time. I understand that some of the broader jokes are supposed to appeal to children, but that would’ve worked a lot better if the movie had totally committed to jumping into the kiddie pool. (I’m curious to know what the kiddos thought of the amusing and flirty sword fighting scene where Prince Alcott repeatedly spanks Snow White.) Pixar movies long ago mastered the art of appealing to kids and their parents (and not always in that order). Here, there’s a winking, ironic sense of humor that’s supposed to let adults know the filmmakers are in on the joke, but is mostly annoying and winds up undercutting the classic story. Watching Mirror Mirror, I was occasionally reminded of movies like The Princess Bride (another somewhat fractured fairy tale) and even Moulin Rouge (another period piece that splashed in over-the-top modern sensibilities). The reason those films are superior is because, unlike Mirror Mirror, they establish and commit to fantastical cinematic worlds and characters that feel real, no matter how fake they obviously are.

Still, director Tarsem Singh (Immortals) and his team (more on them later) certainly deserve credit for painting a very pretty picture. As in his previous films, there are multiple shots in Mirror Mirror that you could freeze and sell as paintings. And, to be fair, some of the modern/self-aware touches actually work. For example, the movie is smart enough to acknowledge that the Queen is significantly older than the Prince (who she wants to marry for his money). I also enjoyed the brief look at the Queen’s beauty regimen that took the concept of “bee stung lips” literally. The way the seven dwarves — a band of thieves here — engage in combat is another creative touch. On the other hand, though we were warned that people in the kingdom were fond of singing and dancing, I could’ve done without the head-scratching Bollywood ending.

As the Queen, Roberts adopts the sort of quasi-British accent American actors feel obligated to use when they appear in period pieces. The actress is clearly having fun with the role, and I like the idea of the one-time America’s Sweetheart playing an evil Queen. Unfortunately, Roberts is not totally believable, which is just as well because her character isn’t really supposed to be scary. The actress is better in the imaginative scenes where she’s also playing the magic mirror. The lovely Collins is quite well-suited to the role of the youthful and pure Snow White, but doesn’t come into her own until the character joins the dwarves and finds her inner strength. (Only after a training montage, of course.) The only problem is that Collins is the only person in the movie who was asked to play it totally straight, so she winds up coming off a bit bland. Hammer utilizes the aristocratic flair he brought to his breakout role in The Social Network in a more literal way, and is impressive as the charming and occasionally buffoonish prince. (After having to watch him act out the effects of a love potion, I also thought he was a very good sport.)

Nathan Lane provides some laughs as Brighton, the Queen’s suck-up of a manservant, but the comic relief isn’t exactly needed because almost everyone is already providing comedy. The dwarves — a who’s who of little people character actors who have appeared in everything from Seinfeld to Pirates of the Caribbean — do a reasonably good job of carving out distinct personalities with limited screen time.

Mirror Mirror starts out with the Queen informing us that what we’re going to be watching is actually her story. (Oddly enough, the movie is not based on the book of the same name by “Wicked” author Gregory Maguire, who knows a thing or two about re-casting classic villains.) What follows is a silly, flashy, entertaining romp that might’ve been great if it were a little more concerned with crafting genuine cinematic magic and a little less concerned with awesome set design. We still get an enchanted kiss and a poisoned apple…just not the way we expect them because the director and his lead character seem to be on the same page: “I read so many stories where the prince saves the princess in the end. I think it’s time we change that ending.”

Mirror Mirror is presented in its original aspect ratio of 1.85:1. The 1080p image is arrived at with an AVC MPEG-4 codec at an average of 36 mbps. This is one of the best looking Blu-rays I’ve ever seen. From the animated opening sequence (reminiscent of the animated interlude in Harry Potter and the Deathly Hallows: Part I), the picture grabs your attention with its stunning texture, clarity and attention to detail. The colors — particularly yellow/gold and red — are unbelievably vibrant. The contrast and black levels (especially during scenes in the dwarves’ cabin) are also impressive. There is the same amount of detail on the warm tones of the opulent palace as there is on the snow-covered woods, where the image never looks washed out. The sharpness is also off the charts: you’ll be able to count every single hair on Lily Collins’ prominent eyebrows.

The DTS-HD Master Audio 5.1 track is a feast for the ears. The first thing you’ll probably notice is Oscar winner Alan Menken’s (Aladdin, Beauty and the Beast) sumptuous score, which is never overpowering. After that you’ll notice the fantastic way it conveys the movie’s sound effects — everything from clanging swords to, um, puppy yelps — and how completely immersive the experience is. (Particularly any scene in the forest, where no ambient sound goes untapped.) What you won’t notice is any issues with the dialogue because it consistently comes through clearly and in a dynamic way.

Deleted Scenes: (6:55) There are five scenes, highlighted by more Nathan Lane and an alternate opening with not-quite-finished effects. Mostly extended versions of existing scenes. Features a “Play All” option.

“Looking Through the Mirror”: (12:58) Producer Bernie Goldmann states that the goal was to make a live-action Snow White that had the size and scope of an animated movie. To that end, there’s lots of gushing from cast and crew over Tarsem (who is curiously completely absent from the special features, except for footage of him working on the set), production designer Tom Foden (also missing) and, of course, Eiko Ishioka, the Oscar-winning costume designer (Bram Stoker’s Dracula) who died earlier this year and to whom this film is dedicated.

“I Believe I Can Dance” (11:01) Choreographer Paul Becker teaches us  the moves for the Bollywood-flavored “I Believe in Love” number that closes the film. Move the coffee table and clear some space in your living room for this one.

“Mirror Mirror Storybook”: An abridged, interactive storybook version of the movie. Another blow to libraries.

“Prince and Puppies” (1:59) An odd and painfully unfunny feature that shows us a puppy focus group evaluating Armie Hammer’s performance with thought bubbles above the pooches’ heads. At least they kept it short.

Basically, the main reason Mirror Mirror exists is to look fantastic on Blu-ray. Fortunately, the disc doesn’t disappoint one bit in the A/V department. And despite some frustrating flaws, I actually enjoyed parts of this movie. There are glimmers of visual greatness here…too bad they were usually followed by glimmers of ugh. This may not be the fairest of the Snow White movies, but it’s still worth a look. (Especially if you have the solid home theater equipment to really bring the Blu-ray to life.)