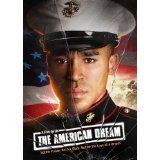 Have found footage films jumped the shark? (If the answer is yes, someone’s going to have to hunt down the beast that ate the shark-jumping cameraman so we can retrieve the tape and see exactly what happened.) Though the genre dates all the way back to 1980’s Cannibal Holocaust, it saw a spike with 1999’s Blair Witch Project and has become the horror delivery vehicle du jour thanks to recent hits like The Devil Inside and the Paranormal Activity films. To be fair, The American Dream doesn’t completely qualify as a found footage film — as far as I can tell, no one finds the protagonist’s camera — but the movie is a sign that the genre may have already seen its best days.

Like Cloverfield, Chronicle and Project X, The American Dream proves that horror films haven’t completely cornered the found footage market. Luis (Jamil Walker Smith) and Ronald (Malcolm Goodwin) are lifelong friends and newly-enlisted Marines who are about to ship off to Afghanistan. Luis is an aspiring filmmaker who idolizes Spike Lee (Smith also directed the film under the moniker J. Smith), so he decides to document his and Ronald’s last few days with their families and friends before they leave.

This in itself sounds like a great idea for an emotional, dramatic movie, but Smith doesn’t seem quite as sure. Instead, he also flashes back to a month before Luis and Ronald’s deployment for their Cancun vacation and springs five months ahead to show us their time in Afghanistan. I’d be ok with showing Luis and Ronald in happier times (Cancun) and the rapid effect the war has on them in Afghanistan if it didn’t stretch the “we’re taping everything” premise to its breaking point.

I understand why filmmakers — especially young ones with modest budgets like Smith — gravitate toward the found footage genre. It provides an immediacy and faux intimacy that separates it from most films, it keeps costs down and, if the movie looks like crap, no one can complain because it’s kinda supposed to look like crap. I actually think that style would’ve worked rather well if Smith had stuck with documenting the characters’ last few days. The movie’s opening credits keep up the ruse by billing The American Dream as “A Film by Us” and featuring Luis and Ronald’s names, alongside credited actors like “Cousin Donnie” and “Grandma Betty.” Instead, the director strains the storytelling beyond its means, and the fact that Luis is taping everything winds up irritating the audience almost as much as it irritates some characters on-screen.

It’s a shame because Smith shows some real promise as a filmmaker. Sure, some of his stylistic touches are openly cribbed from Spike Lee’s playbook — and the plot reminded me of Lee’s underrated The 25th Hour, another film about the final days before a man goes somewhere unpleasant for a few years.  (Another subtle clue: the film’s original title was Make a Movie Like Spike.) However, Smith also comes up with a few striking images of his own — Luis and Ronald’s wild night with two girls was particularly memorable — and some directorial flourishes (like a short film from Luis that documents his parents’ break up or an unnecessary switch to Super 8 footage) that are out of place in this particular movie, but impressive nonetheless. There’s also the requisite semi-ambiguous climax where the camera gets knocked to the ground with a thud, but Smith is smart enough to not actually end his movie with that particular shot.

As an actor, Smith is annoying in the same way most found footage protagonists who talk too much and mug for the camera are. He’s more effective in quiet moments with Luis’s grandmother and mother. Goodwin has more to play with as an actor — Ronald is well-read and articulate after having spent 11 months in prison catching up on high-minded books like “A Man’s Search for Meaning” — so the depth he brings to his character winds up being slightly more believable. The rest of the cast is filled with solid, little-known actors pretending to be amateurs and mostly pulling it off. The material with the families is more impactful than the soldiers’ overlong and crude philosophizing. (Even though the film is only 79 minutes long, several scenes feel like they go on longer than they should.)

Except for a few relatives briefly discussing the merits (or lack thereof) of the war, the movie mostly stays away from taking any sort of overt political stance. Instead, it focuses on two young men — the characters are a bit thin, perhaps so they can stand in for anybody in their position — who want to improve their lives the only way they know how and achieve their dreams, whether that’s becoming a hotshot filmmaker or returning home to raise a baby. I’m just not sure that we needed the shaky cam.