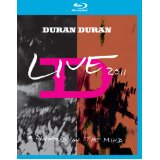 When Duran Duran’s new concert film arrived at UpcomingDiscs headquarters, the staff was practically fighting over the Blu-ray. (“You take it!” “No, YOU take it!”) Needless to say, no one was tripping over themselves to spend a significant amount of time with a band once dubbed “the prettiest boys in rock.” When I expressed admiration for a few of their songs, I became this site’s Duran Duran Fan (By Default). After watching this lively 2011 performance, I feel pretty good about removing the “By Default” portion of my title and simply calling myself a fan of the band.

Filmed in Manchester’s MEN Arena in December 2011, A Diamond in the Mind capped a roller coaster year for the band. (More on that in the Special Features section.) Duran Duran was formed in Birmingham, England in 1978 and quickly achieved superstardom in the early 1980s. Though there have been several different groupings throughout the years, the “classic” Duran Duran lineup — singer Simon Le Bon, keyboardist Nick Rhodes, guitarist Andy Taylor, drummer Roger Taylor and bassist John Taylor (believe it or not all the Taylors are unrelated) — reunited in the early 2000s. That same lineup (except for Andy Taylor, who left in 2006 and was replaced by Dom Brown) is featured in A Diamond in the Mind.

The film starts off with artsy black and white footage of the band getting ready to take the stage. (Rhodes appears to pay special attention to his eye makeup.) Once the show kicks off, the band gets things off to a strong start with “Before the Rain” (think The Killers in one of their more contemplative moods) and “Planet Earth” (the first song to properly get the crowd moving). The fact that these two songs actually bookend Duran Duran’s career — “Planet Earth” was the debut single from their first album, while “Before the Rain” comes from their most recent collection, “All You Need Is Now” — is a neat little bonus. Overall, the show has a pretty good flow, with the band seamlessly mixing in recent songs with their beloved hits. (I didn’t spot anybody making a bee line for the restroom during the newer stuff.)

These days, Le Bon looks less like one of “the prettiest boys in rock” and more like Ricky Gervais thanks to the beard he’s grown. Sparkly pants and a sparkly shirt — but not worn at the same time, because that would be tacky — seem to be his main rock star indulgence. Still, the front man is as charismatic as ever. He engages the crowd without going over the top and routinely skips around the stage because he’s having such a good time. More importantly, he sounds as good as he ever has, which is especially impressive when you consider the band had to reschedule several months’ worth of shows after Le Bon lost his voice earlier in the year. (Though he did bail out on a few of the higher notes toward the end of “Ordinary World.”) Other standouts in the show included “The Reflex” (a joyfully infectious number where Le Bon lets the crowd do some heavy lifting), “Ordinary World” (the band’s most personal song) and “Notorious” (Duran Duran at its funkiest), alongside smashes including “Hungry Like the Wolf” and the show-closing “Rio.”

“A Diamond in the Mind”, directed by Gavin Elder, also features more cinematic tricks than the average concert film. We’ve got slo-mo, different film stocks, distortion, and random cuts to the animated videos playing on the big screens for the live audience. Ordinarily, this sort of razzle dazzle is there to distract your attention from the substandard material on stage. This isn’t the case for Duran Duran. Not only does the band have solid live performance chops, but they were music video pioneers in the early days of MTV. It makes perfect sense for them to play around with their visual presentation.

The excellent, upbeat energy from the top of the show inevitably tapers off toward the middle, when the songs start to sound a bit same-y. The between-song chatter we see is minimal, and there are a few instances when the show was clearly edited for time. (I’m thinking of the band leaving the stage after “(Reach Up for the) Sunrise” and coming back for their encore.) I appreciate the concert being kept at a palatable 116 minutes, but these transitions could’ve been smoother.

Fortunately, the show finishes on a high note and the film as a whole meets my number one requirement for a concert film: I felt jealous that I wasn’t there.

Duran Duran Live 2011: A Diamond in the Mind is presented in an aspect ratio of 1.78:1. The 1080i image is arrived at with an AVC MPEG-4 codec at an average of 29 mbps. As I mentioned before, this Blu-ray has more visual heavy lifting to do than the average concert film and mostly pulls it off. There’s nice detail (like the smoke at the start of the show), but the image doesn’t look overworked. Strong colors/contrast, good sharpness and decent blacks.

Along with the band itself, the DTS-HD Master Audio 5.1 track is the star of the show. Amazing clarity on Le Bon’s vocals (they’re almost record-quality) combines with an immersive audio presentation that had me worried I was going to get a noise complaint from one of my new neighbors. I was particularly impressed by the boom from the bass on the track’s bottom end. There was also a nice balance between the singing from the crowd (which came often due to this spirited bunch) and from the musicians on stage. You also have the option of listening to the show in LPCM Stereo, which was actually the default track on this Blu-ray.

Duran Duran 2011: (12:09) This behind-the-scenes doc — presented in HD video and LPCM Stereo — focuses on the band’s 2011, an eventful year for the band. Not only did it mark the 30-year anniversary of their debut album, but they filmed a documentary with Oscar-nominated filmmaker David Lynch (“Duran Duran: Unstaged”) and suffered a scare when Le Bon lost his voice. His band mates are candid in expressing concern for both Le Bon and their own professional futures. Obviously, things worked out in the end. Rhodes states that the current iteration of the band — which has been together for about six years — sounds better than ever and, after watching this film, it doesn’t sound like total BS.

Bonus Tracks: Not really sure why these two were placed here and not in the main concert. I didn’t know “Come Undone” was a Duran Duran song, so that’s my one thing that I learned today. You can play each individually.

I get why people hate on Duran Duran. They were a group of over-styled pretty boys who had a lead singer with a nasally/whiny voice, and achieved their greatest fame during a time when synthesizers aggressively boxed out real instruments. Some people even argue that they’re a boy band.

I don’t carry 30 years’ worth of baggage from hating Duran Duran, so what I see today is most of that stuff has been stripped away (even Le Bon’s voice has a subtle, more appealing maturity to it). What’s left in its place is a solid pop/rock band that knows how to entertain a live audience. This is no mere nostalgia act — these guys can still bring it. (I have serious doubts I’ll be writing the same about the likes of One Direction in 30 years.)