Posted in: Disc Reviews by Michael Durr on July 9th, 2012 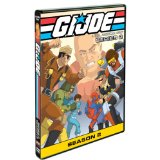 As expressed many times on these reviews, I grew up with the original G.I. Joe, the original Transformers, He-Man and so forth. In those shows, I tended to perhaps forgive some of the quirkiness and things that we would probably never see in a cartoon in this decade simply because I loved them so much as a kid. But would I be so forgiving with a G.I. Joe series that started out in the 90’s, when I was already in high school? We shall soon see when I review Season 2 of the second series of G.I. Joe.

The second series of G.I. Joe officially started in 1989 by DIC Entertainment with a 5 part mini-series which soon launched them into about forty to fifty episodes that lasted until early 1992. With this review, we are taking a look at the final twenty episodes of the show. Let us take a peek at some of the key moments.

The Eliminator is the first episode we come to. Here, Cobra turned Joe character, Mercer gets called out and put in lockdown when sensitive information is leaked to Cobra Commander. We also watch as scrap for parts, Overkill of Cobra gets turned into the deadly Eliminator much to Metal Head’s dismay. This leads to a lot of silly training videos where Metal Head tries to one up the robot. Needless to say, eventually Mercer is able to clear up his name.

Season 2 was also full of two part episodes (presumably to fill up the schedule easier), like Long Live Rock n Roll Part 1&2 which featured G.I. Joe team members Rock N Roll as well as Psych-Out. They are just the right people for the job as Billy Blaster (famous fake rock n roll guy) is conned by Cobra to provide the amplitude for Cobra’s new and deadly sonic weapons. These prove to be as completely bizarre as one would expect but at least Snake Eyes is here for a cameo.

The last season of this series would also have a couple of montage episodes to fill out the series with Basic Training and The Legend of Metal Head. In “Basic Training”, we see what it takes to be a Joe (apparently nothing serious) hosted by Hawk and then in “Legend of Metal Head”, we see a bunch of clips on everybody’s favorite comic relief, Metal Head. Each of these episodes shows how badly the writing had dried up and that it was limping along to a finish.

But where I want to spend the majority of my time is dealing with the two part episode, The Greatest Evil. This was supposed to be the G.I. Joe’s anti-drug message, but when looked at now, it is more likely to invoke laughter than any other reaction. The premise was that Falcon, brother of Duke is addicted to a new drug called Spark. In addition, a sister of one of the Cobra employees lapses into a coma due to the same drug. The drug is linked back to a man simply known as the Headman who runs the empire.

So what do you think happens? Well the Joes and Cobra team up of course. Which leads to…hilarious Joe and Cobra conflict moments. Duke and Commander, Mutt and the Baroness, etc. Joe is basically trying to bring the Headman to justice while Cobra is making sure to collect the cash the drug overlord has acquired. All of that alone would be enough to make most viewers roll their eyes but it gets worse, much worse.

Remember when I mentioned that Falcon was one of the victims of this Spark drug? Well, when Duke hears about what happened, he basically throws his brother to the curb. Instead of perhaps enrolling him into a clinic or helping him, he yells at him, fires him and talks down to him in front of his peers. If this was the middle ages, I would have expected him to be stoned.

By the way, an interesting moment but when Falcon talks about the drug and we get some montage moments including him being able to run faster and work harder (before succumbing to the addiction). Those same moments are then re-used in the Basic Training episode as fodder of how a Joe trains. Way to promote a healthy lifestyle there guys.

Anyway, speaking of the Spark victims, there is also this girl named Sally, the sister of one of the Cobras. She lapses into a coma, and then is kidnapped by a few of Headman’s henchmen. Then mysteriously later she wakes up and somehow lives through the ordeal. First, let me explain something. If you remove somebody who is in a coma in a hospital and then haphazardly transport them to a base in the middle of the desert, they are not going to live to see another day. And if they do, they sure the heck are not going to wake up, get out of bed, slip by guards and be right there to save when Falcon needs her to.

One last thing, I apologize for spoiling a twenty year old terrible cartoon episode, but Headman dies which is kinda significant because nobody really dies in a G.I. Joe cartoon. Anyway, the last thing we see on the screen before running the anti-drug hotline screens is the phrase “Remember Drugs Kill.”. After 40+ minutes of a really poor excuse to not do drugs (because you obviously would need some drugs in order to enjoy this mess), that phrase alone is liable to incite the most laughter of your viewing experience. The old breaking of the eggs and telling us “This is your brain on drugs” was more effective.

This is really the highlight (or lowlight) of the series and it was easy to see that this season was the last of this ill-fated show. Almost nothing is taken seriously, and the writing is dismal. Furthermore, this season even fares worse than the first one because the last few members of the original voice cast (including those who did the voice for Cobra Commander, Hawk, and Baroness) either retired or were recast (though I will say that Scott McNeil was a fine replacement for Chris Latta’s Cobra Commander). It was hard to watch and that comes from a life long cartoon fan.

The video is in 1.33:1 fullscreen presentation. The second series is now twenty years old and at least the show holds up in the video department. Colors are completely off the wall and that shows up even more so now that it has been transferred to the dvd format. True, you will still see graphic mishaps from time to time but that was in the original print, not because of the transfer. However, I do always have to shake my head just a little when I see blue lasers from the Joes and red ones from Cobra.

For the audio portion, we get an English mono track. The sound is neither bad nor good here. The mono sound is expansive enough that we can hear it clearly most of the time but never impressive enough that we can forgive everything else. Dialog is good and the action is a little on the thin side. Sure, this is not going to compare with the whizbang that is the Renegades series but it is on par with the original series we so love.

It says a lot of a show when even people affiliated with the show twenty years later has almost nothing good to say about it (outside of a nostalgia factor). But the fact remains that for some people (such as my brother-in-law for one), they actually grew up with this show and forever have a jaded view on what a good G.I. Joe series is about. Horrible writing, really bad comic relief, and plot holes cloud this show from top to bottom. The second season does not even have enough steam to finish out a season and has to resort to montage episodes to compensate.

The discs are decent for the few fans of the show (or for those who have to have everything G.I. Joe related) with above average video and a decent audio track. The extra does nothing except further cement this as an awful show. My recommendation is go to seek out the old original series or perhaps pick up Renegades which is a much better idea for a G.I. Joe show. Please avoid Series 2 whatever you do, and make sure that friends don’t let friends watch Series 2 of G.I. Joe.

Michael Durr has been reviewing movies for the better part of fifteen years now. He primarily enjoys thrillers, sci-fi, animation and even a little courtroom drama. His favorite films include Escape from New York, the Goonies and anything with Alyssa Milano. When he’s not praising Kurt Russell as the greatest actor of our time or scratching his head over a David Lynch flick, he’s spending time at home in Texas with his lovely wife, Lori and his amazing son. How they put up with him is a mystery, but even Basil Rathbone doesn’t have the time to solve that one.
Duran Duran Live 2011: A Diamond in the Mind (Blu-ray) Storage Wars: Volume 3