Best of He-Man and the Masters of the Universe 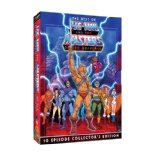 When I was eight, nine years old I remember watching two things on a regular basis. First, was wrestling (think back to the old NWA days) and the second was He-Man and the Masters of the Universe. He-Man is a very fond memory of my youth and I could always count on that show for a good adventure. I even had He-Man and Skeletor action figures and they would do battle for control of Castle Greyskull. However, I am still not exactly sure what Orko was. Perhaps we will find out in Mill Creek’s latest release: The Best of He-Man Season 1 and 2.

As mentioned, this is a best of set but since this site has not done a He-Man review to this point (which is a darn shame), I will do a quick synopsis.

On the planet Eternia, there is a great and powerful man simply known as He-Man who battle against the ruthless Skeletor and other evil forces. However, he must conceal his secret identity from the general world where he is Prince Adam with his faithful cat Cringer (who becomes Battle Cat) and serves under King Randor, his father. Only Man-At-Arms, the Sorceress and Orko are aware that he is He-Man and they help him with the evil forces that plague Eternia.

Since this dvd set contains twenty episodes that were considered the best of the 130 episode run, let us run over a few of them so you can get a feel of how the show goes.

In Prince Adam No More, we open to see Skeletor cast out Beastman for failing him one too many times. He even takes his whip and seat at the council away leaving him to be laughed at from the other monsters and animals of the forest. Meanwhile, the King is trying to pick an escort to accompany him on a very important mission. Prince Adam wishes it to be him rather than his alter-ego, He-Man since he would like to bond with his father who is unaware of his secret identity. However, when Beastman seizes an opportunity and attacks the caravan with the King and Price inside, how will he defend himself and his father without assuming the He-Man form?

Later in season one, Evilseed (one of my favorite episodes) has Man at Arms, He-Man and Battle Cat take to the local farmer’s fields to stop a flood. It appears that the original dam exploded the night after a mysterious man sold the peasants some seeds. He-Man and friends are able to take down the threat but meanwhile at home, evil plants have overtaken the kingdom. The powerful warrior assumes that Skeletor is at the root of this but when he calls on the foul being, Skeletor is having his own issues dealing with deadly plants. It soon becomes necessary for He-Man and Skeletor to join forces to combat this evil.

Moving on to season two, Origin of the Sorceress is perhaps the most fan-favorite episode of all time. In it, we are introduced to Stridor, a mechanical horse built by Man at Arms to serve He-Man. Later we learn of Morgoff the Terrible, a giant immortal who has pledged to invade the planet as he did many years ago. The Sorceress and He-Man must journey to Dark Mountain and battle the foe. However, Morgoff will not attack until dawn and there in the waking hours we learn about how the Sorceress got her amazing powers.

The last episode for us to look at is, To Save Skeletor, another favorite of mine but on a very creepy level. We open to a frantic scene with Whiplash who must see the king. However, since Whiplash is a disciple of Skeletor, there is some apprehension. Eventually we learn the story that Skeletor and Evil-Lyn summoned a monster known as Sh’gora. When they learned they could not control the creature, it turns against them and imprisoned them. Now, the Sorceress and He-Man must free Skeletor and Evil-Lyn so they can harness their magic and send the evil creature back to the dimension it came from.

The episodes are chosen very well and exhibit some of the best qualities of the series. They all have excellent stories and on top of that exhibit good morals which make it very young kid/parent friendly. Personally, I liked the episodes where Skeletor shows a little more character like in Evil Seed which leads to one of the best lines in the series. “He-Man, don’t you ever want to do something evil?” But its said in such a manner that it smells of pure sarcasm.

When you are a kid, these cartoons seem like the greatest thing on earth. Once you get to my age, they do come across as a bit corny and the morals might make you roll your eyes. However, I still contend that these are absolutely perfect for young children and for adults such as me that grew up on the series as long as we do not take it that seriously. It has excellent adventure and a gripping story line that stays fresh even after a ton of episodes.

The video is in 1.33:1 fullscreen presentation. BCI held the masters to this show for the longest time before Mill Creek got the rights. Therefore, it looks like the masters are still in excellent shape and were used here for DVD distribution. The color looks excellent for a near 30 year old (ouch, that will make you feel old) cartoon. Sure, there were a lot of stock footage and static backgrounds, but they did the job so well that it is a still a pleasure to watch after all these years. Washout or pixilation only happens once in a while and is far from distracting. One of the better Mill Creek transfers I have seen.

For the audio portion, we get a Dolby Digital Mono track available in both English and Spanish. The sound is also surprisingly good, just a bit low on the ole volume knob. Dialog is clear, even for some of the odd voices. Sound effects are mostly restricted to the whole “Power of Greyskull” thing and as with any Mono track, its going to stay in the center speaker. But it is faithful to the old episodes and no more should be expected. No subtitles are provided.

Disc One – Best of Season One

I have seen a lot of discs done by Mill Creek which were sub-par to be honest. Poor transfers, sound issues and far more than often, complete lack of extras. A few years ago that seemed to change. While not perfect, they have improved dramatically especially when it comes to cartoon releases. This is greatly evidenced with how they have handled the He-Man and Masters of the Universe cartoon. They have released both mammoth seasons in reasonably priced (~$15 for each 65-episode season) sets and there are plenty of extras.

This best of set is a good starting point for many adult fans that grew up with the series as well parents who might want to sample the show before moving on to the bigger season sets. The audio and video are well done and there are even extras to watch and listen to. I give this best of set a good recommendation. I think personally now that I have watched this best of set, I will probably go find the season sets but I think many people who want to plunk down the $10 for this set will be rewarded greatly by the sights and sounds contained within.

Michael Durr has been reviewing movies for the better part of fifteen years now. He primarily enjoys thrillers, sci-fi, animation and even a little courtroom drama. His favorite films include Escape from New York, the Goonies and anything with Alyssa Milano. When he’s not praising Kurt Russell as the greatest actor of our time or scratching his head over a David Lynch flick, he’s spending time at home in Texas with his lovely wife, Lori and his amazing son. How they put up with him is a mystery, but even Basil Rathbone doesn’t have the time to solve that one.
Home on the Range (Blu-ray) Father Dowling Mysteries: The Second Season