Posted in: Disc Reviews by William O'Donnell on August 1st, 2012 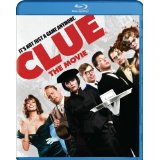 Who killed Mr. Boddy? Col. Mustard in the Library with the Wrench? Mrs. White in the Study with the Revolver? Maybe even the butler did it? A talented comedy cast bring the famous board game to life in a slapstick whodunnit where the chuckles mean more than solving the actual mystery.

The fun that is had in this film is created by the great ensemble cast, which includes Martin Mull, Madeline Kahn, Christopher Lloyd, Michael McKean and Tim Curry as the frantic butler. Each character-actor plays off the others superbly well. There is a plethora of performances that vary from the straight-man persona to outright goofball, being employed as the body count rises and the suspicions reach a fever pitch.

I’m not sure if it goes without saying but, death is never meant to be taken seriously in this film (the fact that it is based on a board game is the first indicator of that). This becomes all the more apparent by the time we reach one of the three possible outcomes. See…even the revelation of the murderer is not meant to be serious as the movie almost has as many options as the game offers. I will discuss this further in the Special Features section and explain the whole “1 of 3” choices.

There are points, approximately in the middle of the film, where the plot drags to the point where we are craving the truth to be revealed just so that we can be done with the story. Thankfully, as hinted at before, the comical cast find ways to make their characters interesting enough at the same time that more (seemingly) random soon-to-be victims arrive at the murder-filled mansion.

1080p HD Widescreen 1.78:1. The transfer of this film is decent but admittedly has a certain degree of fuzziness throughout. A bit of a shame, especially when all the characters are wearing dark clothes in a dark setting, but it’s not distracting unless you look for it.

This may not be the most bombastic of films but a surround option would be appreciated to amplify the score. Plus, with the manner in which Tim Curry is running in and out of secret corridors to explain the murders, there was oodles of potential lost on what sounds could have creeped into the surrounding speakers.

3 Different Endings: The film has the option of choosing a random ending for you, or you can see all 3 possible endings in sequence. Each makes for a satisfying conclusion and the manic re-telling of each tale by Tim Curry makes for a true highlight of the film.

This is a delightful romp, no more, no less. A decent flick to see as a Sunday matinée when you’re too lazy too kill the afternoon outside.

This is the sort of film that has maintained a decent fanbase because of those who appreciate the actors in it. I know I would like this film a whole lot less if the likes of Tim Curry and Madeline Kahn didn’t have that special spark that makes me reflect on all their great comic roles every time I see them (quick! Name your favourites! Rocky Horror and Blazing Saddles! It’s twoo!)