Posted in: Disc Reviews by Michael Durr on August 1st, 2012 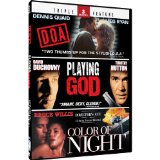 Like a lot of people in general, I strive to get more bang for my buck. Whether it is in grocery shopping, video games or a pizza buffet, I always want to pay the bare minimum and reap the maximum benefit. Another area this holds true is movies. In my collection, there are double packs, triple features and quadruple showings. Today, it just so happens that we have a triple feature from Mill Creek Entertainment that brings us three thrillers: D.O.A, Playing God and Color of Night. This might be a long night.

D.O.A.
Late one night at a police station, a ragged man, Dexter Cornell (played by Dennis Quaid) stumbles in and proceeds to tell the policeman on duty that a murder has been committed. When the desk cop proceeds to ask who, Dexter simply replies “I was.”. Hence starts a series of flashback events of how Dexter Cornell finds himself dying at the hands of an unknown assailant. In fact, it was just thirty six hours ago when the man was simply teaching writing at a local college.

After Mr. Cornell fails to give a student’s paper the attention it deserves, Nick Lang (played by Robert Knepper) throws himself off a building leading to his apparent suicide. At the same time, the professor’s wife, Gail (played by Jane Kaczmarek) is serving him with divorce papers. This leads to a mass drinking binge where he meets a student admirer named Sydney Fuller (played by Meg Ryan) whom he spends the night with.

Dexter and Sydney wake up the next morning and much to his relief he merely passed out on her bed. The professor decides to stop by the local campus clinic for a check up to make sure that this leftover feeling is just a hangover. Much to his chagrin, he has in fact been poisoned and has only a limited amount of hours to live. Dexter Cornell will spend the rest of his short life attempting to figure out who committed the crime.

Playing God
Eugene Sands (played by David Duchovny) used to be a doctor, a darn good one. However, long shifts led to abuse of amphetamines and opiates, which led to the horrible death of a patient and revocation of his medical license. Now, he gets his drugs from a local club and basically hallucinates most nights into a deep slumber. However, on this night a man gets shot at the club and Eugene steps in with his best McGyver impression and saves him with a plastic bottle and alcohol.

The next day, a crime lord named Raymond Blossom (played by Timothy Hutton) hears of the heroic act and sends for the former doctor. He rewards him with $10,000 and a job opportunity of sorts. Ray wants Eugene to be his personal doctor and help his fellow criminals who can not go to a hospital when they get shot. However, what starts as easy money leads to dangerous situations for the downtrodden doctor.

In addition, Blossom’s girlfriend, Claire (played by Angelina Jolie) takes an interest in the doctor. But when Eugene’s nerves start to catch up with him and the FBI convinces him to act as an informant, there seems to be little hope for the young man. With Raymond’s shady deals with the Russian and Chinese mafia, Eugene will have a hard enough time just staying alive.

Color of Night
When one of Bill Capa’s (played by Bruce Willis) patients throws themselves through a window right in his office, he falls into a deep depression and suffers from psychosomatic color blindness. In an attempt to rebuild his life, he goes to Los Angeles to see his friend and fellow therapist, Dr. Bob Moore (played by Scott Bakula). Bob is able to talk him into sitting in a group session with five other patients.

The patients include a nympho, Sondra (played by Leslie Ann Warren), Clark, an obsessive compulsive, Buck, who has not been able to talk about the murder of his wife and daughter since it happened (played by Lance Henriksen), Casey, an arrogant painter, and Richie who stutters and deals with a gender identity problem. The session goes not so well and soon Bob secretly reveals to Bill that he believes somebody in the group is out to murder him.

This soon proves to be true as Bob is brutally stabbed over thirty times and Bill has to be the one to break the news to the group. The group and local police convince him to take over the group and the problems start from there. They further escalate when a girl named Rose (played by Jane March) rear ends Bill’s car which later turns into a steamy love affair. However, Bill starts to find himself in danger and a member of the group winds up dead. Things are not as they seem in this thriller.

Thoughts
Let’s start with D.O.A. which is actually a loose remake of a 1950 film under the same name. The first hour of the movie is actually quite good and does a good job of establishing characters and to leave us guessing as to who the murderer of Dexter Cornell might be. But when the chips come down and we struggle towards an ending, we aren’t really thrilled nor shocked at the outcome. A solid start leads to an eye rolling ending. Meg Ryan is the sole standout and actually enjoyable contrary to her numerous romantic comedies that would follow.

Playing God is also to some degree the same wasted potential. It actually plays out as a television pilot (perhaps from Showtime or HBO) to begin with and they establish an extremely interesting and damaged character in Eugene Sands. However Duchovny’s performance could not hold up the whole movie. Jolie was a shadow of what would become her amazing self and Hutton was not as quite as menacing as I hoped him to be. The end product ends up being completely average.

The funny part to this movie is that it was considered a disaster. It was nominated for and won a Razzie. But in the way I love movies like Sliver, Sea of Love and Showgirls, this has now become my new favorite guilty pleasure. We also get the Director’s Cut here which runs a full 139 minutes and includes plenty of hot scenes which is great for those who want to see more of Jane March (however, you also get to see plenty more of Bruce Willis, so I guess there is a tradeoff).

All three movies are in 1.85:1 anamorphic widescreen presentation. All three of these movies had previous dvd releases but for the most part, it does not look like they have aged very well. Color is okay for most of the presentations, but each of the movies has speckles, dirt and quite a bit of issues. It is certainly far from unwatchable but can be distracting at moments. This is disappointing since the first time these were dvd’ed, it was early in the media life cycle and it would be nice to see some improvement.

All three movies get a 2.0 Dolby Digital Stereo track in English. This is nearly putrid. Volume is very low, with Color of Night doing the best of the pack and Playing God clearly getting the worst honors. Once you get the volume in check, dropout is common and dialog still has issues. Sound effects are pithy and I was starting to wonder if I was going deaf when I couldn’t make out certain faint moments. Furthermore, there are absolutely no subtitles to be found. Just for the uninformed, I know for a fact that when these titles were originally placed on dvd, they included subs. Simply unacceptable.

But this triple feature, two disc release is a budget cash grab honestly. If you have never seen Color of Night or are curious about Playing God, and can pick this up for $10, I can see the value there. The original DVD releases, particularly for Color of Night are very scarce and will be hard to find at a reasonable price. I, myself own the original dvd to Playing God and will not be parting with it.

Again, it is a real shame that Mill Creek compressed the heck out of the first two movies by placing them on one disc. But until they release a proper single Blu-Ray release of the latter two movies (I have not had a chance to see if the D.O.A. blu-ray is better in quality), this might be the only thing we can get. This is frustrating for sure, but perhaps the future will bring something brighter for these films.

Michael Durr has been reviewing movies for the better part of fifteen years now. He primarily enjoys thrillers, sci-fi, animation and even a little courtroom drama. His favorite films include Escape from New York, the Goonies and anything with Alyssa Milano. When he’s not praising Kurt Russell as the greatest actor of our time or scratching his head over a David Lynch flick, he’s spending time at home in Texas with his lovely wife, Lori and his amazing son. How they put up with him is a mystery, but even Basil Rathbone doesn’t have the time to solve that one.
The Three Stooges (Blu-ray) Clue: The Movie (Blu Ray)