Posted in: Disc Reviews by Gino Sassani on August 1st, 2012 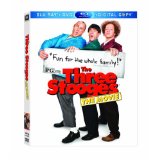 “This ain’t a revival, it’s an orphanage.”

It’s the 1970’s and a speeding car screams down the dirt road of an orphanage. A duffel bag is tossed on the doorstep, and Moe, Larry and Curly have arrived. Ten years later we see the beginnings of the familiar routines in the teenage versions of The Three Stooges. They are unadoptable and are causing the nuns who run the joint a ton of headaches. Moe gets a chance to be adopted but loses it when he asks that the other two be taken as well. It turns out to be the perfect opportunity for Teddy.

25 years later and the adult Stooges are still residing at the orphanage. Doing odd jobs they do more damage than good. But it’s all going to come to an end when Monsignor Ratliffe (Doyle-Murray) announces that an $830,000 shortage means the place is getting shut down in a month. The boys can’t stand to see their pals lose their home, so they set out into the world to get the money.

Of course, these guys are as naive as they come and stand around with a sandwich board announcing they will “Wirk for $830,000 bucks plus meels”. It doesn’t look good, except Lydia (Vergara) and her seedy boyfriend want to knock off her rich husband. The scheme lands the boys unwittingly in a series of misadventures that lead them to their old pal Teddy (Heyborne) and Moe’s almost adopted father Harter (Collins) The film is broken up into pieces to mimic the “short” format of the original show, but they are really all acts in the same story.

We’ve been hearing about the Farrelly Brothers Three Stooges project since at least the mid 1990’s. It seems that the project has gone through many attempts to get it off the ground. At one time it was going to be a bio-film on the comic team. After nearly 20 years of talk the film has finally reached us, and the real question is, was it worth the wait?

The short answer is no. How could it be? You can only tease the Stooges fans for so long before we get skeptical and eventually settle into a “believe it when we see it” attitude. With the fan expectations, the iconic nature of the original material, and the development hell that lasted more than a decade, the film just had too much going against it. That was quite evident in the box office draw. It took in a modest $44 million on a $30 million budget. The real bad news is that nearly half of that came in the first week. By the end of week two 75% of the final haul was in. That’s a pretty good indication of bad word of mouth and a disappointed fan base.

That was the short answer. Now are you ready for the longer answer? As disappointing as the box office response might have been, this project is actually a dream film for home video. This Blu-ray release is the perfect environment to enjoy the good that the film really has to offer. It’s a wonderful love letter to the Stooges themselves and the countless fans who have been entertained by them since the 1920’s. There is no doubt at all that Bobby and Peter Farrelly get it when it comes to The Three Stooges. The movie demonstrates the kind of respect and understanding that should make the Stooges themselves proud. I’m sure they were sitting up there somewhere enjoying the laughs right along with the rest of us. The bits capture the real essence that was The Three Stooges. They were smart enough to use the original sound effects, and they make all the difference in the world. The film has great timing and always preserves such a warm and comfortable bit of nostalgia that is The Stooges. Okay, so the longer answer might have been shorter than the short answer. Who knew.

Most important, of course, has to be the actors who play The Stooges for this film. You have Chris Diamantopoulos as Moe, Sean Hayes as Larry, and Will Sasso as Curly. At first glance you’ll find yourself doing a double take. They really do physically resemble the original men. I think Hayes as Larry works the least, but the other two are, at times, spot on. As the film progresses there are absolutely times when they don’t quite have it right. But more times than not they have their roles down perfectly from the voices to the facial expressions. As a team they work together like they’ve been doing it for years. They really are naturals.

The best bits are when the Stooges are faced with the modern world, and they are fish out of water. A Curly bit with an iPhone is included on the trailer and is one of the better bits. There are some gags that do fall flat. There’s a “urine” gun fight in a maternity ward where they’re using infant boys as squirt guns in a fight likely attempting to capture the pie fight days of the classic show. It never really works. But these moments are often forgivable as the new boys appear to be channeling the masters at times.

There’s a pretty cool supporting cast here. Moe ends up on The Jersey Shore, and that cast makes an extended cameo on the film. Jane Lynch is excellent as the orphanage Mother Superior, and Marianne Leone steals every scene as the rough-voiced Sister Ricarda who plays the boys’ main foil at the orphanage. There’s a little bit of Cheech & Chong’s Sister Mary Elephant in there. Swimsuit model Kate Upton literally fills out the group of sisters as the shapely Sister Bernice.

The Three Stooges is presented in its original aspect ratio of 1.85:1. The 1080p image is arrived at with an AVC MPEG-4 codec at an average 30-35 mbps. The picture is about as clean and natural as they come. Colors are bright, and detail really helps to sell how much the new guys fit their roles. Black levels are above average. The print is clean. You really won’t find anything to keep you from laughing along here.

The DTS-HD Master Audio 5.1 is really there for the dialog. The sound design has only one other essential element, and that’s the classic boinks, thuds and bings. I was so wrapped up in those elements that I completely forgot about score or surround separation. It’s not important.

Deleted/Extended Scenes: (9:29) You can’t select them individually, and just about all of this material can be classified as extended stuff.

What’s The Big Idea? A History Of The Three Stooges: (10:39) No, this isn’t really a complete look at the original boys. There is a quick breakdown of the history of the originals and it includes some classic footage. Most of this is how the film finally made it to the screen.

Knuckleheads – Behind The Scenes On The Three Stooges: (5:11) The focus is on two of the bits here.

Did You Hear That?: (4:11) This feature looks at how the original sounds add to the film.

Casting The Three Stooges: (9:12) There’s plenty of screen test footage here, and the focus is on how each of these guys were selected for the parts. I thought it was some kind of divine natural selection. Who knew?

Three Stooges Mash-Up: (3:10) A montage of slapstick moments from the film.

Original Screen Test: (4:06) The sandwich board scene was used to test the guys’ timing and chemistry. Here’s the complete scene.

The only real flaw is that it does appear to be overlong. I think The Stooges worked best in the short format. It also works better, as I’ve already explained, as a home video title. I hope that the bad buzz from the theatrical release doesn’t keep you away from this one. There’s a direct-to-video market here, because I would like to see these guys do more. Let’s hope it doesn’t take another 16 years. That causes its own set of problems. “You know how long I’ve waited for this day, but now that it’s here, I don’t know.”

Gino Sassani is a member of the Southeastern Film Critic's Association (SEFCA). He is a film and television critic based in Tampa, Florida. He's also the Senior Editor here at Upcomingdiscs. Gino started reviewing films in the early 1990's as a segment of his local television show Focus. He's an award-winning recording artist for Omega Records. Gino is currently working on his 8th album Merchants & Mercenaries. Gino took over Upcomingdiscs Dec 1, 2008. He works out of a home theater he calls The Reel World. Favorite films: The Godfather, The Godfather Part II, The Body Snatcher (Val Lewton film with Karloff and Lugosi, not the pod people film), Unforgiven, Gladiator, The Lion King, Jaws, Son Of Frankenstein, The Good, The Bad And The Ugly, and Monsters, Inc.
Leverage: The Fourth Season Triple Feature: D.O.A. / Playing God / Color of Night