Posted in: Disc Reviews by Michael Durr on August 6th, 2012 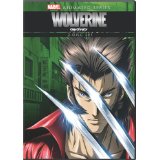 While I have watched a ton of cartoons, the same really can not be said of anime. Sure, I know my classics like Akira, Ghost in the Shell, or Vampire Hunter D but by and large I am not up on my anime. I certainly like it but when I look the shelves and shelves of television episodes or movies, I’m mostly overwhelmed. However, a little bit ago I saw a commercial for some Marvel Anime on G4, I was instantly interested. Little did I know that a couple of the series would end up on my doorstep.

Wolverine and Mariko overlook the city out on a boat. They are arm and arm and enjoying a peaceful life together. That is until three flying henchmen shoot out of the water and rain gunfire upon them. Wolverine is able to get Mariko out of the way and takes the brunt of the hit. His body is torn up but he is not out of the fight. Wolverine’s healing factor takes over and absorbs the bullets. His claws come out and he screams as we go straight into the opening theme song.

We rejoin the scene, one year later in New York and we hear a siren wail. A businessman named Asano is corned on a roof by a bunch of cloaked soldiers. He tries to shoot them but the bullets fly off harmlessly. The soldiers pull out what looks like a sonic weapon of some sort and blast it at the businessman. We watch as his body starts to vibrate out of his shell. His glasses crack and a badge comes out (revealing he is an agent cop) and also cracks. Then all of the sudden a beer can comes down.

The beer can explodes into the soldier’s face providing a temporary distraction. Wolverine is on the scene and he takes out the soldiers while keeping his beer frosty cool. Okay, not really. But he does finish off the soldiers. Asano and Wolverine talk about old times but the cop has some news for Logan (Wolverine’s real name). It appears Mariko is alive and well in Tokyo. However, her father is Yashida Shingen leader of the Kuzuryu (a Yakuza clan) and she is now promised to a man named Hideki Kurohagi.

On to Tokyo. We find ourselves at Shingen’s dwelling which is heavily guarded. Wolverine strolls by a few guards who look at him suspiciously. He ducks out of cover and jumps over a nearby wall into Shingen’s garden. Logan spots Mariko by the house and moves closer. Somewhere in a meditation room, Shingen awakens and senses danger. Before Logan can talk to Mariko for a minute, he finds himself surrounded by gunmen along with Shingen. A duel has been issued and Wolverine must accept.

The duel is to be done with wooden swords but that does not make it any less deadly. Shingen strikes quickly and with more grace than would be expected of the ancient master. Wolverine takes the strikes and does his best to withstand the pain. Each time he gets struck, he is able to use his healing factor to repair the damage. However, just as he might be getting the upper hand, a mysterious dart slides into Wolverine’s back. Logan spins around and notices Kurohagi with a gun designed for chemical warfare. The warrior screams as we fade to black.

As with Blade, this was done as a twelve part series and does a good job of presenting the story and going right after it. Development of the characters are not done by long monologues, they are done by action and re-action. The supporting cast is a good one with the characters already mentioned along with Wolverine’s sidekick of sorts, Yukio. Many might know of her from the comics from a similar story. Her story is a tale of her revenge as Shingen murdered her mother.

We also get a taste of Omega Red which is always appreciated as one of the very important Wolverine type villains. Kurohagi while annoying is written as a heartless coward and plays the part perfectly in voice and look. However, Wolverine is a mixed bag. On one hand, he certainly plays the savage creature that is usually portrayed in the comics. On the other, he comes across as egotistical and very cocky. In a word, arrogant.

It is hard to say what time period they really want this to take place. I would love to say modern times since the original story was in the Wolverine comics around the early 80’s. But if we are going on Wolverine’s attitude, this was a long time ago. See, by purists Wolverine is arguably about 100 years old due to his healing factor. Therefore, he might look young but he acts with some intelligence and if he gives in to his bloodlust, it is because of a traumatic event, not for sport and carelessness like exhibited here.

The video is in 1.78:1 anamorphic widescreen presentation. Like the name implies, this cartoon has a very anime style (and even an occasional fanboy or two anime moments). The color is excellent and the action is able to keep pace with detail and intensity. The characters are thankfully not over the top like a lot of anime but there are a few moments that really capture the essence of what the animators intended to do. Great style as long as one is not looking for something super polished.

For the audio portion, we get a 5.1 Dolby Digital track in English and Japanese. I opted for straight English rather than the original Japanese. The dub is actually excellent and honestly unless the person is one of those, we have to do original no matter what, I really think they will be fine here. Dialog is clear and everybody is fairly easy to understand. Surrounds and bass are flavorful and create a lot of boom. One would be pressed hard to find a better audio in a dvd setting. English and English SDH subtitles are included.

Interestingly enough, the Wolverine live action film sequel will also focus on Shingen (as well as Yukio and Mariko), so this twelve part series is yet another take on one of the most popular stories that deals with Wolverine. The actual story and supporting cast is certainly the highlight of this series and unfortunately Wolverine (or rather Logan) himself becomes the lowlight. Far too often, he is way too cocky and way too foolish (and a pansy occasionally too) in contradiction to the Wolverine we have come to know.

The 2-disc package puts on a pretty good show. There is solid video and audio and at least a trio of featurettes to keep us entertained beyond the feature. I do recommend this series as a curiosity (or if you want to have the entire Marvel Anime set). Please keep in mind, it is not terrible, but it could be a whole lot better. Somewhere in between a lot of shredding and violent fighting beats the heart of a story. Unfortunately of the two I have seen so far, Blade has a much better time of it. Take care.

Michael Durr has been reviewing movies for the better part of fifteen years now. He primarily enjoys thrillers, sci-fi, animation and even a little courtroom drama. His favorite films include Escape from New York, the Goonies and anything with Alyssa Milano. When he’s not praising Kurt Russell as the greatest actor of our time or scratching his head over a David Lynch flick, he’s spending time at home in Texas with his lovely wife, Lori and his amazing son. How they put up with him is a mystery, but even Basil Rathbone doesn’t have the time to solve that one.
Earth From Above – Preservation of Water and Forests/Food and Wildlife Conservation Blue Like Jazz (Blu-ray)