Posted in: Disc Reviews by Gino Sassani on August 28th, 2012 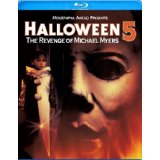 “They should ban Halloween in this town.”

By the time we got to the 5th installment of the Halloween film franchise, there might have been fans thinking it might be time to ban its sequels. Even the return of young Danielle Harris and Donald Pleasence couldn’t save this train wreck of a movie. It ranks as the worst of all 10 Halloween films at the box office and has been conveniently forgotten by the fans of the franchise. Yes, it even made less money than Season Of The Witch. It looks like we’re about to be reminded of just how horrible horror can really be.

The first 3-5 minutes of the film are really the last few minutes of Halloween 4. Things change as the posse opens up on Michael and he falls into the mine. Now we follow what happened to him after that. A stream carries him to the home of a swamp hermit (Roisman) where he is nursed back to health. Jump to a year later and Jamie (Harris) is in a children’s clinic where she has stopped talking. What’s really going on is that she has now developed a psychic link with her Uncle Michael and can see through his eyes as the killing spree begins again. Can you say “bye-bye Hermit”?

Dr. Loomis (Pleasence) has been keeping a close eye on Jamie and has figured out what is happening. So, Michael’s after her again and the game begins and ends pretty much as it always has: with a lot of carnage and a lot of screaming and running.

There are two high points to what is basically a substandard slasher film. Danielle Harris gives an even better performance even though she’s restricted to a lot of squirming around and almost no dialog the entire film. Unfortunately, those limitations really take away the fresh elements her character brought to the franchise. It was a horrible idea. The second high point is the use of the gang at KNB for the makeup effects. They are a huge leap from the rather dull effects of the previous film. But alas, even the genius of KNB couldn’t save this bad film.

The movie takes away the hunt aspect for most of the running time. Michael is merely cutting down teens again who would rather party. One of the characters spends a rather large part of the film actually driving around with Michael and doesn’t know it. The film has none of the mystery and atmosphere and ends up merely a kill-by-numbers affair. Even Donald Pleasence is relegated to a cruel man this time as he uses Jamie to bait Michael into a trap.

Halloween 5 is presented in its original aspect ratio of 1.85:1. The 1080p image is arrived at with an AVC MPEG-4 codec at an average 30 mbps. Again, this film is quite a bit of an improvement over a really bad DVD release. There’s a good amount of texture and grain that give you that filmic experience, whether you want it or not this time. The print is in pretty good condition, and black levels are good enough to provide necessary shadow definition and clarity.

The Dolby Digital TrueHD 5.1 is a marginal improvement over the previous film. There is at least a hint of a bottom here, and the surrounds are a bit more immersive. Overall it’s a pretty solid audio presentation that delivers the screams.

There are 2 Audio Commentary Tracks here. The first features Don Shanks who played Michael Myers in the film. Again it’s moderated my Justin Beahm. The second is a Cast and Crew Commentary.

The film is important only in that the events are significant as the story moves forward. Everything else is a complete disappointment. Give Anchor Bay credit for taking the time to prepare the release so that we could end up with a complete Blu-ray set. They must have known it was a financial risk, and it was likely smart to release it at the same time as 4. Still, my reaction is pretty much the same as when I first heard Halloween 5: The Revenge Of Michael Myers was coming to Blu-ray: “I can’t believe it!”

Gino Sassani is a member of the Southeastern Film Critic's Association (SEFCA). He is a film and television critic based in Tampa, Florida. He's also the Senior Editor here at Upcomingdiscs. Gino started reviewing films in the early 1990's as a segment of his local television show Focus. He's an award-winning recording artist for Omega Records. Gino is currently working on his 8th album Merchants & Mercenaries. Gino took over Upcomingdiscs Dec 1, 2008. He works out of a home theater he calls The Reel World. Favorite films: The Godfather, The Godfather Part II, The Body Snatcher (Val Lewton film with Karloff and Lugosi, not the pod people film), Unforgiven, Gladiator, The Lion King, Jaws, Son Of Frankenstein, The Good, The Bad And The Ugly, and Monsters, Inc.
Revenge: Interview With Emily VanCamp Halloween 4: The Return of Michael Myers (Blu-ray)