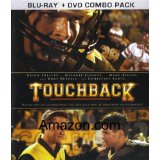 It’s impossible for me to discuss what I feel didn’t work in Touchback without talking about the movie’s big plot twist. I’m not even sure it’s accurate to refer to it as a “twist” since it comes in the first half hour and is an essential component of the film. On the other hand, the movie’s official plot description is intentionally vague — for the record, the film’s trailer is considerably more forthcoming — and seems designed to conceal a major part of the story. Having considered all that, I’m only issuing a Mild Spoiler Alert.

Touchback is the story of former high school football hero Scott Murphy (Brian Presley), who led his tiny Coldwater High School team to a state championship in 1991. Unfortunately, Scott shattered his leg when he scored the game-winning touchdown, derailing his collegiate and professional football dreams. Twenty years later, he’s a broken man in more ways than one. He has become a disheveled, bitter soybean farmer who is married to Macy (Melanie Lynskey), the compassionate girl who fell in love with him after his injury, and is jealous of Chris (Marc Blucas), his wildly successful former teammate.

As the 20-year anniversary of Scott’s greatest triumph approaches, the bank threatens to foreclose his farm, putting his livelihood in jeopardy. During the lowest point of his life, Scott gets an extraordinary opportunity: he is transported 20 years into the past and given a chance to relive the days leading up to that 1991 championship game.

Call it time travel, a hallucination brought on by a near-death experience, or just a bad trip. Whatever the case, this turn of events is completely jarring. Other than some very oblique references to Field of Dreams (another corn-fed sports fantasy) and It’s a Wonderful Life (the Frank Capra film is a major influence), there’s nothing to suggest this development is plausible in any way. For example, Field of Dreams had the mysterious voice in the corn field, while It’s a Wonderful Life provided George Bailey with a guardian angel. Heck, Big at least gave us the Zoltar machine. I’m not saying it has to make rock-solid sense, but the filmmakers have to give us something.

I haven’t even mentioned the inherent (and mostly unintentional) silliness of seeing a bunch of actors in their mid-30’s play high school students. (The same actors from the present day scenes play their characters once the action moves to the early ‘90s.) A few performers in their early 20’s (like former American Idol contestant Kevin Covais as a high school geek) fare only slightly better in their present-day, old-age makeup. Kurt Russell, as the school’s paternal football coach, is briefly burdened with old-age makeup that isn’t J. Edgar-bad, but it isn’t too far away. In other words, everyone in this movie — except maybe the baby-faced Lynskey — looks kind of stupid at some point.

It’s too bad because this film otherwise contains excellent production values for such a modestly-scaled endeavor. (Touchback was shot in 20 days with a $5 million budget.) I was particularly impressed with the hard-hitting football action staged by director Don Handfield (making his feature film debut), with an assist from sports coordinator Mark Ellis. The script (written by Handfield), however, is heavy-handed — the slo-mo shot of a dejected Scott throwing a tight spiral with a liquor bottle wasn’t exactly subtle — cheesy and cliché. Fortunately, “heavy-handed”, “cheesy” and “cliché” aren’t deal breakers in a sports movie.

The cast mostly gives understated, lived-in performances. Presley makes for an appealing enough lead, even when Scott is being petulant and is at his most beaten-down. I appreciated the spark Presley brought to the younger Scott after his initially dead-eyed work in the present-day scenes. Lynskey succeeds in making Macy lovable enough to make Scott conflicted about wanting to change his destiny. Meanwhile, Russell’s presence is valuable in grounding a lot of the silliness in the film’s second act. Christine Lahti (Chicago Hope) is good in a handful of scenes as Scott’s supportive mom. There’s also a completely random cameo from NFL great Barry Sanders as an assistant coach.

As the big game approaches once again, Scott has to decide whether to alter his destiny for the better(?) or allow his life to play out exactly the same way as the first time. (You can probably guess what happens. Don’t overthink it.) Fortunately, the performances and the story are engaging enough to keep us watching till the end.

Touchback is presented in its original aspect ratio of 1.78:1. The 1080p image is arrived at with an AVC MPEG-4 codec at an average of 19 mbps. I was immediately impressed by the black levels, which turned out to be important because the climactic game takes place at night. (And so does a skinny-dipping scene.) Panoramic shots of cornfields and country roads look fantastic thanks to strong color and contrast. No surprise then that the greens stand out. The image looks soft around the edges a few times, but is generally quite sharp. (You’ll get a great look at Kurt Russell’s old-man makeup.) There is minimal grain, but the transfer still manages to achieve a good amount of detail and texture.

The Dolby TrueHD 5.1 track is very nicely balanced and is surprisingly subdued when it could’ve gone over the top. For example, the “Inspirational Sports Movie” music never drowns out the background noise from the film’s rural setting. I enjoyed the way a radio broadcast was distributed throughout my speakers (making me feel like I was sitting in my car listening to sports talk radio), as well as the low crunch of the football scenes and the crowd noise that made it seem like I was sitting in the bleachers. Though the dialogue comes through clearly enough, my biggest complaint is that it seemed to be presented at too soft of a level. I had to turn up the volume on my TV more than usual to hear what was being said.

Audio commentary with writer/director Don Handfield and producer/actor Brian Presley: In this informative, leisurely track, Handfield reveals he first wrote the story in 1997 when he was going through a divorce. We also learn Presley was a state champion high school quarterback in real life, while Handfield admits Frank Capra was a major influence and states he made this movie with three words in mind: authentic, worn and beautiful.

The Making of Touchback: (5:48) This featurette has the cast and crew talking about the film’s themes (including not losing sight of what’s important in life). However, most of the time is (rightfully) spent gushing over the work of sports coordinator Mark Ellis and Kurt Russell. (Even the filmmakers don’t seem sure how they convinced Russell to be in this movie.)

Talk about “fantasy football”! This film is best enjoyed if you embrace its cornball tone and ignore its painful title, as well as any sort of butterfly-effect related time travel conundrums.

This is a well-meaning, well-made flick that will keep you engaged while you’re watching, but isn’t likely to make a lasting impression. Whether you decide to watch it or not, “whatever happens, it’s your choice.”