Catch Me If You Can (Blu Ray)

Posted in: Disc Reviews by William O'Donnell on November 29th, 2012 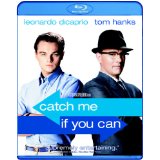 Before his 19th birthday, Frank Abagnale Jr. posed as a pilot, doctor, lawyer and secret service agent in an uncanny crime spree that saw him forging millions of dollars worth of fraudulent checks. This film chronicles the fantastic yet true adventure with large doses of fun injected into the 2 and a half hour long chase.

Abagnale committed these crimes in a time that was far more trusting than it is now (in fact, Abagnale would go on to use his skills to boost the security of the currency and checks he took advantage of before). Whenever Abagnale’s crimes are described, his statistics are read like highlights from a sportstar rather than someone malevolent. We do not see any actual victims. Even his nemesis, Agent Carl Hanratty (portrayed by Tom Hanks), eventually gains a lifelong friendship after multiple years of pursuing (and frequently being humiliated by) Abagnale.

Indeed, there is a very interesting dynamic between Abagnale and Hanratty. As much as this film is about a wild chase, it is about a broken home and Abagnale’s search for a fatherly connection. After running away from home, Abagnale constantly attempts to impress his father, Frank Sr. (a wonderful performance by Christopher Walken), but fails to reunite his family the way he wishes to. Every Christmas Abagnale calls Hanratty and, only then, displays his weakness and sorry. Abagnale is surrounded by women, wealth and partyers, but his only true connection is to an FBI Agent he is seeking to place him behind bars. In fact, it is on Christmas and only after seeing his mother for the first time since he ran away from home that he finally surrenders to Hanratty.

Outside of the film, we learn the deeper significance of Abagnale’s broken home motivating his actions. Though it kind-of darkens repeats viewings of the film to learn this, it is interesting to know that the real-life Abagnale never did get to see his father again after he ran away. Director Steven Spielberg and screenwriter Jeff Nathanson included the fictionalized meetings between Abagnale and his father in order to firmly establish this relationship (or simply the desire for this type of relationship) as a major motivator for Abagnale. This is the only major element in the film that is purely fiction, and this knowledge can help the audience sympathize with Abagnale because it enforces that idea that he was not motivated by money, but was simply running away from the home-life he held so dear yet was broken forever.

Leonardo DiCaprio takes full advantage of his boy-ish looks while demonstrating fine acting skills in portraying Abagnale as someone who thrives on roguish charm coupled with a youthful enthusiasm that disarms the audience into sympathizing with a master criminal. This performance is juxtaposed nicely against the stuffy but intensely motivated Hanratty that Tom Hanks offers us. Both actors are able to convey just how obsessed they are with each other (as indirectly as it may be at times since Abagnale’s obsession with finding fatherly apporval is displaced and sometimes set to Hanratty, the only authority figure he bothers to communicate with). Hanratty’s obsession is frequently noted by his attempts to solve the mystery of how Abagnale managed to pass the bar exam and become a lawyer (and the truth is the most entertaining fact the film has to offer).

John Williams’ score is another highlight of this film. Williams takes a step away from his well-known orchestrated scores to create something much jazzier that invokes the work of Henry Mancini, sans Mancini’s level of memorable hooks. Spielberg already did an admirable job recreating the visuals of the 1960s, Williams helps bring us even closer to that time with his delightful musical contributions.

1080p HD displayed at Widescreen 1.85:1. Debuting close to but before the advent of HD filming, Catch me if you Can has a nice looking transfer but it is not as perfect as one might wish for from a Spielberg Blu Ray. That being said, any “flaws” it has are simply a lack of impeccable sharpness in the picture that only cinephiles may notice.

The main track is in English DTS-HD Master Audio with Dolby Digital 5.1 in Spanish, French and Portguese available as additional options.
John William’s score sounds fantastic in all speakers (with those finger snaps really sounding startling when surrounded by them). Said score is blended masterfully with the rest of the audio, letting the dialogue and effects remain clear.

The special features on this release are identical to the ones found on the 2-disc DVD edition released a few years back. Amongst the bonus features there are a few redundancies but still plenty of interesting points, mostly when involving the real Frank Abagnale Jr.

Behind the Camera: Running over 17 minutes, this is a decently thorough look at the different stages of creation of this film. Mostly we hear how everyone involved was enthralled with this story from the get-go.

CAST Me If You can: The Casting of the Film: The main cast get their own profiles.
–Leonardo DiCaprio: It is interesting to learn here that Leo was the one who started with the film and helped bring it to Spielberg’s attention. If anyone can be credited with instigating its creation, it is Leo.
-Tom Hanks: Spielberg and various actors praise Hanks for his ability to take, what seemed on the page, to be a supporting role and make it a lead.
-Christopher Walken and Nathalie Baye: Just as he does in the film, Walken steals the spotlight in this mini-feature. His performance in the lunch scene alone is spectacular to behold; especially from behind the scenes.
-Martin Sheen and Amy Adams: Sheen comments on how he can check Spielberg off his list of big-3 directors he wished to work with (Coppola, Malick and Spielberg). Meanwhile Amy Adams gets profiled as one of the only cast member in these profiles who actually auditioned for her role.
-Jennifer Garner: It may have only been a cameo appearnace but hers was the scene that Leo demanded be returned to the film after it was removed from the shooting script.

Scoring Catch Me If You Can: Williams explains his jazz inspirations for this unique score.

Frank Abagnale: Between Reality and Fiction: Another series of mini-features under one big banner.
–Meet: This enforces the view of Abagnale as a “misguided” anti-hero by retelling his stories in a light, forgiving tone. We also get to see Abagnale on the film set as he continues to demonstrate the extreme confidence and natural charm that got him into this amazing story to begin with.
-Pilot: The real Abagnale regales us with the identical story that is within the film.
-Doctor: It’s amazing to hear how this occurred that allowed this to happen. It was pure luck and moxy.
-Lawyer: Just like his adventure becoming a doctor, a ton of lucky happenstance helped make this happen. There was just the right amount of leniency in Louisiana (especially since ou do not need an actual law degree there) that helped Abagnale get in.
–Teacher: In the film, this is only referenced slightly in one scene but the real Abagnale tells how he pretended to be a teacher simply by staying one chapter ahead of the class.
-Getting Caught: Before he got caught, Abagnale had warrants for his arrest in 26 different countries. The film shows how he was caught in France and spent some time in one of their prisons, but it does not include the fact that he was transferred to Sweden before finally spending time in an American jail. He also expands on his contributions to anti-fraud measures added to checks and various forms of modern currency based on his work with the FBI.

The FBI Perspective: A technical advisor who used to work for the FBI gives tips to the cast and crew. Beyond seeing that for a few seconds, his dry interview doesn’t offer anything entertaining or enlightening.

In Closing: This is basically just everyone from all the previous special features offering their final thoughts.

Photo Galleries: Three different sets that profile the actors, behind-the-scenes, and a costume gallery which has some interesting sketches by the costume designer.

This is a lengthy film but it’s chapterized well by the different professions that Abagnale adopts. It is a refreshingly fun offering from Spielberg’s catalog. This is a very fine release of the film with a nice presentation and some enjoyable features.

You can catch a previous review of this film here:

Catch Me If You Can