Posted in: Disc Reviews by Gino Sassani on November 28th, 2012 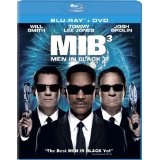 “I promise you the secrets of the universe, nothing more…”

It’s been an astonishing 15 years since Will Smith and Tommy Lee Jones first teamed up as Agents J and K respectively for the intergalactic police force Men In Black. The film was like a breath of fresh air. It combined top-flight science fiction fantasy with whimsical humor. It was a hit at the box office, and like most wonderfully original hits it was quickly followed by a sequel that had almost none of the cleverness and freshness of the original film. The film was so unmemorable that I sat with other critics getting ready to see Men In Black 3 and none of us could actually remember what the second film was even about. Years went by and most of us put the franchise in our rearview mirror.

So when I heard there was going to be a follow-up this far down the road, I wasn’t exactly as excited as you might think. It didn’t help that the film went through production hell almost from the day it began. There were script rewrites and halted production schedules to work out the kinks. Rumors were flying that the film was a mess and Sony was getting frantic. By the time the movie was here, I was among those who thought the film was merely being dumped to get whatever they could out of the production costs. I’ve never been so happy to be so wrong. Not only is Men In Black 3 much better than the second movie, it virtually rivals the original film in quality.

“This is the one where…”

Just as in real life, it’s been over a decade since we’ve caught up with Agents J & K. They’ve become almost like an old married couple. They’re close, but they’ve taken each other for granted. That’s all about to end when Boris The Animal… eh make that just Boris, on second thought, breaks out of Luna Max prison on the Moon. Watching the daring escape, you really have to hand it to the bitter alien. He’s been locked up for 40 years and he wants revenge on the Men In Black agent who put him there and shot off his arm. He’s out to erase K.

Sure, but killing K won’t get him his arm back, right? Wrong. Boris intends to go back in time and kill K before he can take him down. The next thing you know J isn’t taking his partner for granted anymore. That’s because he’s the only one who even remembers the man. History now shows that K was killed by Boris 40 years ago. The only solution is for J to jump back in time and save his partner. And when we say jump back in time, we do mean jump. It’s the coolest time-travel bit since Christopher Lloyd and Michael J. Fox stepped into their Delorian. Josh Brolin takes over for Tommy Lee Jones as J & K are back together again to save the world. Oh, did I mention that K held the key to the Earth’s defense system, so no K means the world is in deep trouble?

From the very beginning the film captures the charm of the original movie. When we’re back at Men In Black headquarters, it’s like we never left. Will Smith and Tommy Lee Jones share the old chemistry instantly. That’s not really so much of a surprise. What will really knock your socks off is to find it’s all still there once Smith teams up with Josh Brolin as the 1969 version of K. Give Brolin a lot of credit here. He’s not only playing the character of K here. He’s playing Tommy Lee Jones. He has all of the mannerisms down. The voice is also nearly perfect. The filmmakers deny it, but I believe Tommy Lee Jones’ voice was looped in there a couple of times, particularly when you can’t see Brolin’s lips. It’s just the right psychological touch to make Brolin’s voice feel that much closer. Smith and Brolin work well enough together that, dare I say it, we don’t miss Jones as much as I thought I would.

The rest of the cast isn’t too shabby either. Emma Thompson joins the cast as Agent O. She’s taking over for the departed Zed and is a coy love interest for K. We get more of that story when Alice Eve takes over for the young Agent O. Michael Stuhlbarg is the scene-stealing alien this time around. He plays Griffen, who can see all of the various future possibilities. Jemaine Clement is another scene-stealer as the over-the-top villain Boris. He’s under enough makeup to be unrecognizable, but the voice is quite distinctive. His chief weapons are spines his body generates that he throws.

The story isn’t going to win too many originality awards. Sure, you’ve seen this story before. That doesn’t mean that the presentation isn’t as fresh as it could be. Rick Baker has a blast with the expected population of aliens. The aliens actually looked a little disappointing in the trailer, but don’t be fooled. You’ll find a lot of eye candy here. There’s new tech, most notably a powered unicycle that’s quite cool. More important to the production design is that the film never takes the 60’s angle over the top. The time humor is subtle without the cliché jokes that Dark Shadows reached for with the 1970’s. The period is there and serves as an environment without ever being distracting.

Men In Black 3 is presented in its original aspect ratio of 1.85:1. The 1080p image is arrived at with an AVC MPEG-4 codec at an average 30 mbps. There are two different picture styles going on here. In the present scenes the film is bright and glossy. Colors pop in pretty sweet contrast to the black suites. That particularly goes for the MIB HQ where everything is a bright shiny white. The 1960’s tones are a bit more subdued. Colors here tend more toward earth-tones. There’s more of a brown and orange trend going on here. The picture in both cases is always sharp with some really fine detail. Black levels are above average even if the film doesn’t give you a lot of opportunity to catch much in the way of shadow definition.

The DTS-HD Master Audio 5.1 is bright and lively. The surrounds supply plenty of ear candy. These aliens make a lot of various clicks and squishy sounds. They add fine ambiance to the whole affair. The score is particularly bright and dynamic. Dialog is clean and always easy to understand.

Partners In Crime – The Making Of Men In Black 3: (26:24) Cast and crew give up the usual goods here. Plenty of sunny stories and behind-the-scenes footage.

The Evolution Of Cool -MIB 1960’s vs. Today: (11:14) The crew talks about changes between the two eras. We get a look at the tech and style of each era. There is also footage from the first two shows to show how things have evolved from film to film.

Scene Investigations: (17:25) Cast and crew break down four key scenes for us with a play-all option.

Progression Reels: (17:37) There are six scenes where you get a breakdown of the various f/x levels. Crew members narrate what you are seeing.

Give Barry Sonnenfeld credit here. He went to the well and found it wasn’t as dried up as many thought it would be. Perhaps stepping away was just what the franchise and its players needed. Now it’s come alive for a new generation of viewers that never had the chance to see the original on the big screen. The film is quite magical and entertaining as hell. Forget about all of the horror stories you’ve heard about production and script issues. The Men In Black are back…in time. Maybe just in time. A miracle, you say? “A miracle is something that appears impossible but happens anyway.”

Gino Sassani is a member of the Southeastern Film Critic's Association (SEFCA). He is a film and television critic based in Tampa, Florida. He's also the Senior Editor here at Upcomingdiscs. Gino started reviewing films in the early 1990's as a segment of his local television show Focus. He's an award-winning recording artist for Omega Records. Gino is currently working on his 8th album Merchants & Mercenaries. Gino took over Upcomingdiscs Dec 1, 2008. He works out of a home theater he calls The Reel World. Favorite films: The Godfather, The Godfather Part II, The Body Snatcher (Val Lewton film with Karloff and Lugosi, not the pod people film), Unforgiven, Gladiator, The Lion King, Jaws, Son Of Frankenstein, The Good, The Bad And The Ugly, and Monsters, Inc.
Lawless (Blu-ray) Catch Me If You Can (Blu Ray)