Posted in: Disc Reviews by William O'Donnell on December 13th, 2012 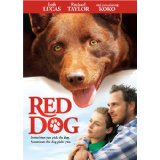 A small mining community in Western Australia get visited by a vagabond dog. This Red Dog (named after the fact that the red dust of that desert region stained his fur that colour) has a deeply significant effect on every worker’s life yet not one of them can truly claim to own him until an American bus driver begins working there. Red Dog was a big fan of hitchhiking across the country and seems to be attracted to riding great distances on a bus with his new best (human) friend.

I should have known what I was getting into when I saw that this was a dog story. All the best dog films are incredibly sad. This film was based on true events and its saddest portions include heavy references to the saddest (true) dog story of all time (nope, not Old Yeller), Hachi-ko, the story of a dog that waits for his master after they have died (was adapted twice onto film, as well as laid out the groundwork for the most depressing episode of Futurama “Jurassic Bark”). The story begins with miners resolving that they cannot shoot Red Dog after he ate poison, but this is not the saddest part. Over half way through the audience gets an emotional kick to the throat that I, for one, was not prepared for. By no means is this a criticism of their storytelling, more a warning to those that may think they’re in for a family-ready delight (ok…they ARE but certainly not without a box of tissues as a prerequisite).

The film is told through bar stories as more and more people gather to tell their own story of how this dog randomly strolled into their lives only to change it forever. The entire cast gives very solid performances that perfectly balance the comedy without getting cheesy, and the serious points with total earnestness. The story certainly does rally between pure comedy, such as the pranks Red Dog pulls or his major league dust-up (pun intended) with his nemesis Red Cat, and quite severe drama, such as the attempted suicide of a miner and the horribly depressing scenario I hinted at before (and if anyone knows the story of Hachi-ko I gave as a reference, you’ll understand completely why).

Widescreen 1.78:1. The sun bleached tone certainly does dominate. Like the title character, the entire film seems to have been dipped in just a bit of red dye. It’s not quite Mars film level, but it threatens to be. In any event, the picture quality is nice, red tone and all.

Dolby Digital 5.1 and 2.0 are available. All sounds have been mixed together nicely and are presented well in all speakers. There are some moments where music is the focus and it is balanced well with the other scenes so there’s no need to reach for the volume knob.

Commentary with Director Kriv Stenders and Producer Nelson Woss: These gentlemen offer some pleasant stories about the film’s productions. They’re uppity even during the most depressing bits.

Koko’s Screen Test: Seems to be a sketch made simply for comedy’s sake where the director is giving advice to the dog like he would a regular actor.

Making of RED DOG: Just over 10 mintues long, it feels like an extensive trailer through most of it. Mostly comprised of the cast speaking about the story in a light fashion.

Training Footage: Shows the two dogs who were up for the role, how well they are rained and replays footage from the “Screen Test” featurette.

Deleted Scenes: Mostly expansion of things we already knew or had seen. Still, these four scenes could seamlessly return to the main feature.

Storyboards: A side by side comparison of the storyboard with the final footage.

The cast is full of charmers (including one of the final perfomances by Aussie acting legend Bill Hunter) and the story is quite endeering.