Gunsmoke – The Seventh Season Volume One

Posted in: Disc Reviews by William O'Donnell on December 11th, 2012 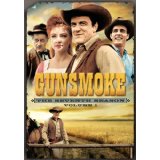 I’ll say this about a program that has remained  consistent in quality for twenty seasons…it makes for challenging reviews. Talking about each season of Gunsmoke is difficult in that you either write briefly to try to avoid redundancies, but might seem too hasty, or you have to labour over each episode, in which case, you’re only going to have hardcore fans paying attention. Since this website has touched on previous seasons: ( http://upcomingdiscs.com/?s=gunsmoke ) I shall opt for the former option, and hope y’all out there catch that I’m not being hasty…but respect a show that warrants no fresh complaints after 7 years a-runnin’ thus far.

The most obvious change to the show that happened in this Seventh Season is expanding from half and hour to a full hour for each episode. This can be a great challenge for a show that was not originally created in this format. Doubling the length of each episode has allowed for more focus on developing the guest characters. There are no major plots that overlap several episodes so we can see how the hour long format aids this type of show, as well as helping to lay the groundwork for hour-long adventure and/or crime dramas to follow.

There are occasions in this season where you can tell that some writers may not have been fully prepared to make Gunsmoke double in length as some of the episodes drag a little bit when trying to flesh things out. This stretching also means that Matt Dillon doesn’t always have as much presense as he used to. More so than in previous seasons, Dillon arrives to resolve the loudest of conflicts and thats just about it.

Still, this is a continuously entertaining show that shows no real fatigue 7 seasons in.

1:33 Fullscreen. An extremely nice transfer to DVD. Shown in its original black & white, the picture is very crisp and clear. As good as one could hope from a show this old. The original masters were obviously very well kept (I suppose it doesn’t hurt being a legendary show).

Sponsor Spots: Not as fun as the ads where James Arness addresses the audience directly, but still interesting for TV history buffs.

Episode previews: A standard preview that would air to promote particular episodes. Not all of the episodes on this set have their trailers, but most do.

Collectors will want the entire series but this season is particuly essential given it marks one of the most significant changes.

Some for trivia nuts out there: keep an eye out for a very young Leonard Nimoy in a guest role.