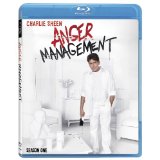 The following sentence is taken directly from the back of the Blu-ray case for Charlie Sheen’s latest small-screen vehicle: “Charlie thrives on the chaos in his life while still battling his own anger issues.” So it’s fair to say FX’s Anger Management isn’t afraid to blur the line between reality and fiction. It’s actually a good move because the latest TV show tailored specifically to Sheen’s talents doesn’t have much else going for it.

Anger Management, created by Bruce Helford (The Drew Carey Show), is loosely based on the 2003 Jack Nicholson/Adam Sandler film of the same name. (And I really can’t emphasize the word “loosely” enough; the only things the two have in common is that one of the characters is an anger management therapist and, um, it features humans.) Sheen stars as Charlie Goodson, activating a little-known clause in his contract that stipulates he can only play people named “Charlie.” In this case, his Charlie is a disgraced former baseball player turned therapist who counsels a motley crew of patients with anger management issues out of his home.

Ed (Barry Corbin) is the crusty old homophobe/misogynist. So you can imagine how he feels about overdramatic, passive-aggressive homosexual Patrick (Michael Arden) and angry, vapid hottie Lacey (Noureen DeWulf). Meanwhile, Nolan (Derek Richardson) is the sweet, dim-witted guy who is attracted to angry women, which means he’s hopelessly in love with Lacey. Charlie also has to juggle the women in his personal life, which includes ex-wife Jennifer (Shawnee Smith), OCD daughter Sam (Daniela Bobadilla) and aggressively unemotional sex buddy Kate (Selma Blair), who eventually doubles as Charlie’s own therapist. The members of the therapy group are played by a talented bunch of performers forced to act out tired sitcom stereotypes. It’s actually something that’s baffled me about Sheen’s career in recent years. For a guy who seems like such a maverick in real life, the actor seems slavishly devoted to a hopelessly old-fashioned sitcom form.

The show shares a network with It’s Always Sunny in Philadelphia (which gleefully plunges into the depths of political incorrectness with every episode) and preceded Louie (which features comedian/auteur Louis C.K. manipulating and re-shaping the sitcom form almost ever week) during its first season. Anger Management — with its CBS-friendly laugh track and obvious jokes — looks like a dinosaur by comparison. In fact, I’m not even sure Sheen is aware that he’s on one of basic cable’s most risk-taking channels instead of network TV.

Other than Selma Blair appearing in an impressive assortment of lingerie for roughly 55 percent of her screen time, the show is shockingly tame. The jokes on 2 Broke Girls are raunchier. (And funnier.) There’s nothing wrong with a good old-fashioned sitcom, as long as you bring a generous dose of wit and sneak in some heart. Modern Family and Parks and Recreation do this better than any other shows on the air, and even the 2 Broke Girls genuinely care for each other. Meanwhile, the characters in Anger Management seem to either use or barely tolerate each other. (I will admit that there’s potential for Charlie’s therapy group to become a sort of fractured family.)

So what are the parts of this show that actually work? Well, Sheen may not be the most naturally gifted comedian anyone’s ever seen, but he absolutely knows his way around an exasperated — or lascivious — punchline. His strengths as a comedic actor lie in his deadpan demeanor, and he gets to deploy that to solid effect since he’s often surrounded by maniacs. (I actually enjoyed the prison therapy group more than Charlie’s regular patients; it’s a shame we don’t see them nearly as much.) Some of the other actors occasionally rise above the material — including DeWulf’s commitment to playing a shallow ditz and Richardson acting like an even more laid-back version of Owen Wilson — but for all intents and purposes, this is the Charlie Sheen Show. Former Reno 911 star Keri Kenney also does a hilarious guest spot as Charlie’s former “slumpbuster” from his ballplaying days.

Of course, the lion’s share of the fun to be had in Anger Management comes from trying to spot parallels to its star’s more colorful real life. Fortunately, the show mostly makes this incredibly easy. The first episode opens with Sheen literally taking a jab at the way he was let go from Two and a Half Men, and the character of Charlie is keen on dating bimbos with names like “Daytona.” There’s also a moment in Ep. 4/“Charlie and Kate Battle Over a Patient” where he chucks a bowling shirt — the preferred attire of his Two and a Half Men character — with disdain. Martin Sheen also pops up as Charlie’s dad Martin (naturally), and Charlie is forced to consider whether his hatred of his father has more to do with avoiding his own demons. (Martin will become a series regular in season 2.)

Some of the nods are more subtle, including the recurring presence of Brett Butler as a bartender. (One can easily imagine Sheen and the former Grace Under Fire star bonding over their monumental clashes with Grace Under Fire/Two and a Half Men creator Chuck Lorre.) Meanwhile, Charlie’s easygoing scenes with ex-wife Jennifer could probably be compared with Sheen’s improbably functional relationship with real-life ex Denise Richards; the two get along better as exes than they did as spouses. (Speaking of Richards, she pops up as a love interest who doesn’t believe in therapy and gets to say, “My ex can be a little difficult…nuts…a total maniac…a real whackjob”, before Charlie cuts her off.)

As you can see, it’s impossible to separate the man from the character, so the show doesn’t even try. I was curious to watch this show now that we’re well removed from Sheen’s famous public meltdown and the hype surrounding his return to TV. I’m disappointed to say the show is toothless and archaic. The good news is that it’s also built around one of the most fascinating TV stars of our time. The bad news is you’ll keep wishing he’d come up with something more interesting.

Anger Management: Season One is presented in its original aspect ratio of 1.78:1. The 1080p image is arrived at with an AVC MPEG-4 codec at an average of 25 mbps. The show opens with a close-up of Sheen peering directly into the camera and I immediately thought — due to his haggard recent appearance — Blu-ray was not the star’s friend. (To be fair, Sheen looks much healthier than he did during the tail end of his run on Men.) After that, the show settles into its multi-camera sitcom groove and there aren’t very many close-ups to speak of. There is reasonably good clarity and sharpness, as well as adequate colors, though the only time I remember them popping was during an early scene in Sam’s messy room. Black levels are satisfactory (and mostly evident in Blair’s hair). There’s honestly not a heck of a lot going on visually, but the Blu-ray presents the show as well as can be expected.

It’s a similar story with the DTS-HD Master Audio 5.1 track. The subs smack to life during the opening scene with Sheen beating up a therapeutic dummy — “You can’t fire me, I quit! Think you can replace me with some other guy, go ahead; it won’t be the same. You may think I’m losing, but I’m not! I’m…anyway, you get the idea.” — but other than that, there’s not too much to hear. The dialogue comes through very clearly, but the rear speakers are almost completely ignored. (They only perk up during the brief musical interstitials between each scene.) Meanwhile, the laugh track isn’t annoying because it’s disproportionately loud coming out of the front channels; it’s annoying because there are laughs pumped in after almost every single line. (No show is that funny.)

Charlie’s Baby: (17:20) This behind-the-scenes doc is the most interesting special feature. It’s here that we learn Sheen didn’t want the Two and a Half Men fiasco to be his legacy. The actor also wanted to tell a story about redemption and making amends using a more “adult version of Charlie.” Before he goes too deep, he’s quick to remind us it’s still just a sitcom. Sheen and creator Bruce Helford cover the casting process and the show’s development. They also discuss how Anger Management and FX settled on the “Tyler Perry model” for season one. (More on that in Final Thoughts.)

Behind the Couch: (4:33) The actors who play the main therapy group talk about their characters and their relationships with each other. Seems like a crew that gets along pretty well.

Obviously, the real-life circumstances surrounding Anger Management are infinitely more fascinating than the show itself could ever be. The first season was produced in a tight window and if it reached a certain ratings threshold, FX agreed to renew it for an additional 90 episodes, ala Perry’s deal with TBS.

The show achieved the necessary ratings, and those extra 90 episodes will be filmed over the next two years. So it’s easy to see why Anger Management favors quick and easy punchlines. Plus, it’s not the worst idea in the world to keep Sheen occupied with work. For that reason, it’s a great move for both Sheen and the network because the show is instantly guaranteed syndication. I have my doubts as to how well the ratings will hold up since the desire to rubberneck at Sheen’s wild personal life seems to have died down. Then again, the man has delivered major ratings before, and I’d be a fool (or a troll) to doubt his abilities to do it again.

I can’t recommend you sprint out and grab this set because everything you need to know about its content can probably be found on TMZ for free. On top of that, you can hop aboard for season 2 — which premieres Jan. 17 — without missing a beat.