Posted in: Disc Reviews by Brent Lorentson on March 7th, 2013 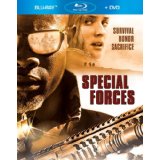 In a film the pays its respects to the French soldiers who are participating in the war on terror as well as the journalists that risk their lives to cover the war, Special Forces delivers more of the same in this new release.  Though the default setting has the spoken language in English and has English-speaking stars, don’t let this French release fool you; the dubbing is terrible and the film is better viewed in its original language. Elsa (Diane Krugar) is a French journalist who is in Afghanistan to cover a story about a woman sold as a child.  By now we should all know speaking against the politics in these countries is not just bad, but when you are a woman this could get you killed.  The woman is wanted by the Taliban, and Elsa wants to do what she can to help her friend escape, but there is little to be done when Elsa witnesses a raid of the woman’s home.  It’s not long after that Elsa finds herself in the crosshairs of the Taliban and is also captured.  Elsa reluctantly reads a message from the terrorist group, and the video is broadcast for the French government to see.  This in turn causes the French president to take action and approve a mission to have the journalist rescued.

Though many of the story points have been seen before in numerous different films, it still works and had me gripped due to some beautiful cinematography, and it doesn’t hurt that it had Diane Kruger as the captive journalist. (If this woman was able to start the war in Troy, just imagine how she’d motivate a platoon of Special Forces soldiers.)  Leading the platoon is Kovax (Djimon Hounsou), and the only other guy I recognized from the group was Lucas (Denis Menochet from the opening scene of Inglorious Basterds).

It doesn’t take long for the soldiers to reach the compound and rescue the journalist.  From the time the soldiers get the mission I’d be surprised if it was more than ten minutes later they are pulling off the rescue.  Because of this swift move I was curious what direction the film would take. Unfortunately what we end up getting is a story about the platoon trying to reach the border with members of the Taliban hot on their tail.  This was a little disappointing.  The film, though keeping a nice pace in the beginning, starts to lose steam at this point.  We get the soldiers trekking through rough dangerous terrain; then we get a brief shootout which returns to the soldiers on the run again.

As more and more members of the platoon are killed and the terrain becomes all the more perilous as they reach the snowy mountains, I started to think perhaps this was a tale that would not end as expected. Could this be a story about a platoon that attempts a rescue and even against all odds and never giving up they all die?  As the film plods along I realize I was simply being too optimistic that the film would bring something new to the crowded field of films about the war on terror.

Diane Krugar is what sells this movie.  She puts her range of talent on the screen and is impossible to not appreciate to some degree.  This is a strong-willed woman who is broken but is forced to hold herself together, to survive not only against her pursuers but the elements as well.  The simple flirting between Elsa and one of the soldiers was sweet, but I wish more time was spent developing this relationship; instead we just get several shots of Elsa being carried on the backs of different soldiers.  It seemed every time the story did try to show its heart, it was nothing more than a ploy to try to get us to care a scene or two later when they are killed, and that’s just a cheap move.

Special Forces is presented in its original aspect ratio of 2.35:1. The 1080p image is arrived at with an AVC MPEG-4 codec at an average 25 mbps. Colors are natural enough, but lighting is often problematic. This is, of course, really a production issue. Even in low-light situations details and textures tend to get washed away. Black levels are weak with horrible shading that keeps the image from ever becoming truly black at all. Contrast only shines in a brief scene where the environment is snow, and we finally get some rich separation of the images on the screen.

The Dolby Digital 2.0 is the only way to listen in English. If you wish a good surround uncompressed mix it is only available in French. For a war film there is little in the way of sub response. Dialog is mediocre at best. There is nothing here to immerse you in the action. The sound presentation only serves to place the action firmly in another place where you are merely a spectator.

Deleted Scenes: (5:29) There are 7 with no ability to access the scenes individually. They are also only provided in French.

Making Of Feature: (1:31:10) There’s a lot of behind-the-scenes footage here, but the presentation is rather dry. It is also only available in French with English subtitles.

Over all the film doesn’t have much going for it; in an already crowded genre it doesn’t bring much to the table.  But the beautiful cinematography and the talented cast do give it a look and feel that commands a little more respect than the standard straight-to-video film.

Brent Lorentson is a horror writer and film critic based out of Tampa, Florida. With a BA in Digital Film, he co-wrote and co-directed Scavenger Hunt. His short stories have appeared in various horror anthologies. In 2019 his short script Fertile Blood will be a part of the anthology horror film Slumber Party. He is currently working on his first novel A Dark and Secret Place set to be released in late 2019. Favorite Films: Taxi Driver, Fight Club, I Saw the Devil, The Wild Bunch, Dawn of the Dead, A Clockwork Orange, Pulp Fiction, Heathers, The Monster Squad, and High Fidelity.
Chasing Mavericks (Blu-ray) Wreck-It Ralph (Blu-ray 3D)