Rise of the Guardians

Posted in: Disc Reviews by William O'Donnell on April 11th, 2013 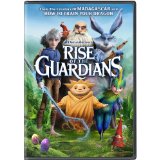 The boogeyman, who goes by the name Pitch Black, is gaining power by turning children’s dreams into nightmares. An alliance of fantasy characters, North (Santa Claus), (the Easter) Bunny, Sandman, and Tooth (Fairy), come together to face this opponent. They call themselves Guardians who have sworn to protect all of the world’s children. In this adventure they recruit a new member, Jack Frost, who is on his own personal quest of discovery.

Big budget CG animated films are largely excuses to have enormous chase scenes, or other similarly fast pace sequences, which amount to being the equivalent of a guitar solo for computer animators. This film is no exception. At least here the graphics are justified since that we are dealing with characters who are rooted completely in imagination and fantasy. If we want the Easter Bunny to have super-teleporting abilities and to live in a complex network of tunnels that is populated by various sizes of walking eggs…we can imagine it so. If we want to see the Tooth Fairy work out of a floating palace that is teeming with hummingbird style minions…why not make it happen? Every scene is an enormous spectacle. Our main villain and the Sandman both deal with…well..sand particles that each move in their own pattern on the screen…I can only imagine the animators losing their minds over having to choreograph all of them.

Just like a child who still believes in the likes of Santa Claus or the Tooth Fairy, we must all have a little naive faith in this film. Our heroes are losing their powers because children are no longer believing in them thanks to Pitch’s nefarious schemes. There are some enormous logical gaps that could easily grind the story to a halt. If all they need is to be believed in then why do they operate purely in secret? Their solution to fighting Pitch at the climax of the film only furthers my inquiry. If you look past the logic (or lack thereof) of this film’s storytelling, you can still unearth an amusing adventure.

The voice acting in this film is well done. Despite there being some big names attached to this they do not phone-in their performances. Jude Law is articulate and menacing as Pitch, Hugh Jackman is right at home with his native Australian accent as Bunny, and Alec Baldwin adopts a joyously boistrous Russian accent for North, just to list a few. examples.

Widescreen 1.85:1. The picture quality is decently clear except for the villain. Pitch Black lives up to his namesake but this means he often camouflages into any dark settings on screen…and not always on purpose.
It is worth noting that although there are some uncanny effects in this film (such as the aformentioned sand) there are some bits that look a bit cheap and out of place. There could be a majestic surrounding while North’s beard looks stiff as if it was rendered by an inferior animation program. This doesn’t come up too often…but I did notice it.

The surrounding speakers are greatly utilized, with “wooshing” sounds traveling all over as characters fly on and off screen. As well, Pitch’s haunting voice travels mysterious from speaker to speaker as a hero on screen searches for him. A great effect for this type of villain.

Dreamers and Believers: A lighthearted profiling of the central characters, the actors who provide their voices, and the various creators of this film.

Sandy’s Dream Guide: An interactive menu that shows a couple pages of visual options (such as bicycle, family, food etc.) and it offers an analysis as to what dreaming about such items could mean to you.

Filmmakers’ Commentary: The director and producers do well to praise the many creators and performers throughout this film. They are refreshingly non-indulgent with this commentary track.

Promo Material for other Dreamworks animations.

A pair of hopping egg toys

Feel free to break this one out for the kiddies for most any holiday, although be warned that Pitch is slightly scarier villain than toddlers may be ready for.