Posted in: Disc Reviews by Brent Lorentson on April 11th, 2013 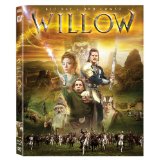 Looking back, it’s amazing how far visual effects have come since 1988.  I can remember sitting in the theater watching Willow for the first time and believing everything I saw up on the screen wasn’t the work of movie magic, but I believed it to be reality.  Perhaps some far off land where there are swordsmen fighting evil sorcerers and trolls lurk in the shadows of abandoned castles.  This is a thought I’d like to believe I’m not the only one that hoped this was a reality, but if I am I’m fine with that.  Willow came out at a time when Hollywood was trying to bring large-scale fantasy to the screen with other releases like Excalibur, Legend and Conan.  Though these films are their own kind of awesome, the digital effects still hadn’t quite reached the level they needed to be to make these worlds as immersive as the Lord of the Rings films, for instance.  Where the film may not have held up over the years with the special effects, it’s the story that manages to captivate this viewer 25 years later.

Willow Ufgood (Warwick Davis) is not your ordinary hero, and for 1988 seeing a little person as the star of a film is even further for ordinary.  But Willow isn’t about ordinary; it’s about a journey of fantastic proportions where even the tiniest of men can be the biggest of heroes.  When Willow is tasked to return a baby to her people, he must venture away from his village to a land that seems to be on the verge of war, something Willow and his fellow dwarves want nothing to do with.  During Willow’s journey to find a proper protector for the baby, he encounters Madmartigan (Val Kilmer), who claims to be the greatest swordsmen that ever lived; unfortunately when he’s found he’s been left for dead in a cage.  This is one of the roles that has me wondering what happened to Kilmer; in this role he is simply fun to watch and dripping with charisma; the guy was meant to be a star.  And when we do get to see Madmartigan in action, I couldn’t help but wonder what it would be like if Madmartigan and Aragorn were to ever cross paths.

The journey is a constant struggle for Willow and you can’t help but feel bad for the guy considering all he wants is to get the baby to safety and return to his simple life where he is struggling to become a magician.  His struggle reminded me of Luke’s struggle to become a Jedi; though the tests they go through are different, the result is the same about finding the strength within; seems like this is a plot thread Lucas enjoys using in his projects (nothing wrong with it though).

If there was a major complaint I had it’s with the Brownie characters; basically they are little characters who are about the size of mice who attempt to help Willow on his quest.  I know they are there for the comic relief, but I just didn’t find them funny at all, instead they were just annoying and getting in the way of the story.  I’m still a bit baffled how they can be separated from Willow and Madmartigan, but somehow manage to catch up to them.  These characters were the Jar Jar Binks of the film, and they were a pair; I can’t really think of a time I ever hoped for a character to be stepped on or simply scooped up by a bird to be devoured, but sadly these hopes were squashed.

But even for a film this ambitious before special effects were mostly CGI, Willow offers up some moments that have a creepy effect, and by creepy I mean seeing Madmartigan as a half-man, half-pig in one of the key sequences later in the film.  As a kid I could remember this scene and it creeping me out, thinking some evil witch existed who could do such things.  It’s in this moment film where Willow steps up and becomes the magician he was destined to be. Sure, a lot can be said about the film showing there can be a hero found in all of us, but we’ve seen this story before, and we’ll see it many times again.

The film has some thrilling moments, for instance the fight against the two-headed beast, as well as the downhill sled ride on a shield.  Unfortunately, though, the rest of the film doesn’t really hold up.  It’s not a bad film by any means, and the score is a memorable one by James Horner, but for the most part I simply accept the film as nothing more than a two- hour escape into a world of fantasy and adventure.  For me that’s all the film needs to be anyway; not every film has to be perfect or Oscar-caliber; sometimes we just want to sit back and unplug from reality, and this is the perfect film for that when you can’t invest the 10-plus hours for the Rings trilogy.

Willow is presented in an aspect ratio of 2.39:1.  The 1080p image is arrived at with an AVC MPEG-4 codec at an average of 29 mbps.  This is a relatively nice remastering bringing the film to HD.  The details seem to be a little sharper from the original DVD release of the film, and generally the film looks a lot cleaner and more polished.  The snow sequences show beautiful unblemished whites, and the darker scenes like those in Bavmorda’s castle have enough separation in the blacks that we can see what is going on.  What can’t be helped is some of the effects look a little lighter or seem to have a halo effect around them.  For the most part this is a good-looking remaster.

The DTS-HD Master Audio 5.1 track is simply what you would expect from a Lucas production.  The score shines and  thrives off the excitement of the chase and fight sequences. Whether it’s the ambient sound of the forest or the intensity of the sword fighting, the audio track helps immerse you in the sequence with ease. There are no issues with trying to understand the dialog.  I can’t find any complaints here; this is about as good as it gets with audio.

Deleted Scenes with Ron Howard: (12:32) Ron Howard gives us a brief explanation for why certain scenes were trimmed or cut due to the pacing of the film or simply cut because the effects were not pulled off.  Howard even goes into detail to explain sometimes plot points are trimmed from the film and the work that goes into cleaning up this one minor change throughout the entirety of the film.  This is worth watching simply to get a little extra insight into the film since it is lacking a commentary.

The Making of an Adventure with Ron Howard: (23:39) This is a behind-the-scenes featurette that aired on television back in 1988.  What’s most telling about this is seeing how hands-on George Lucas actually was with the production.  It’s amazing to see how far special effects have come since this was released and to think for its time this was the peak of special effects magic.

From Morf to Morphing with Dennis Muren: (17:24) Here we get a look at what went into the morphing effects in Willow.  Apparently Willow was the first film of its time to use this effect which would later become an effect seen in Indiana Jones and the Last Crusade, Abyss and Terminator 2.  Kind of amazing to see how much work went into two minutes of film, an effect that would later change the way we see special effects in cinema.

Willow-An Unlikely Hero-Personal Video Diary of Warwick Davis: (10:53) Warwick Davis walks us through some of the footage he filmed behind the scenes during the making of the production. The footage isn’t must-see, but hearing Warwick’s anecdotes on the production make it worth the view.

Matte Paintings: (1:09) A quick montage of some of the matte paintings used for the film and a comparison from the painting to the final render.

As a kid I had a lot of fond memories of this film, and my hopes of being able to recapture that same magic were dashed, but the film is still a good time.  For those that have kids into fantasy and adventure this may be easier to show the kids that you feel may not be old enough or able to sit through the Lord of the Rings films.

Brent Lorentson is a horror writer and film critic based out of Tampa, Florida. With a BA in Digital Film, he co-wrote and co-directed Scavenger Hunt. His short stories have appeared in various horror anthologies. In 2019 his short script Fertile Blood will be a part of the anthology horror film Slumber Party. He is currently working on his first novel A Dark and Secret Place set to be released in late 2019. Favorite Films: Taxi Driver, Fight Club, I Saw the Devil, The Wild Bunch, Dawn of the Dead, A Clockwork Orange, Pulp Fiction, Heathers, The Monster Squad, and High Fidelity.
Earth’s Final Hours (Blu-ray) Rise of the Guardians