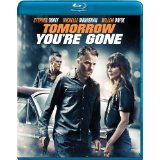 We all know what it feels like to nod off in the middle of a film. It starts with micro-naps that last a few seconds. They’re so short, we don’t even realize we’ve fallen asleep. But when we wake up, we feel totally lost because we’ve missed a line of dialogue or scene transition. I mention this for two reasons: 1.) the confused protagonist of Tomorrow You’re Gone floats through his life in a dream-like state and 2.) watching this incomprehensible mess of a movie constantly made me feel like I’d fallen asleep and missed something. That’s a problem because I was wide awake.

The plot of Tomorrow You’re Gone — based on the novel “Boot Tracks” by Matthew F. Jones, who also wrote the screenplay — is straightforward enough. We meet Charlie Rankin (Stephen Dorff) just as he’s about to be released from prison. He receives an encoded letter from Billy “The Buddha” Pettigrew (Willem Dafoe), Charlie’s former jail-house mentor. The hidden message orders Charlie to carry out a hit, and Charlie agrees because he feels indebted to The Buddha. On his way to do the job, Charlie meets Florence (Michelle Monaghan) a flirty oddball/former porn star, and the two form an uneasy bond. After the hit doesn’t go as planned, Charlie has to dodge an unhappy Buddha. (He also spends an inordinate amount of time dodging Florence’s sexual advances because…actually, it’s not really clear why he keeps rejecting this woman who is throwing herself at him. It flies in the face of everything we know about movie ex-cons.)

From very early on, it’s clear Charlie — who goes by “Samson” when he’s with Florence — has a fractured psyche, which is expressed in a variety of stylish ways by director David Jacobson (Dahmer, Down in the Valley). When Charlie/Samson says, “all my life, from what I can remember of it, I’ve been dreaming about hurting and killing the people that hurt me”, it’s the closest we get to a big shining clue about what’s going on. Jacobson seems to be channeling the dreamier works of David Lynch (Mulholland Drive, Lost Highway, etc.), except he forgot to include the aggressive, intoxicating weirdness. That aggressive, intoxicating weirdness is crucial because it’s what transforms Lynch’s best films from being “totally confusing” to “totally confusing, but we can’t stop watching.”

Tomorrow You’re Gone is frustratingly vague from the very beginning and all the way through its end credits. The film subtly hints at Charlie growing up in an abusive household — where he may have suffered early head trauma — and strongly hints at the idea that Dafoe’s Buddha may not be all there. I’m not the sort of movie watcher who needs my hand held, but I do need a reason to keep watching what’s happening on screen. The perplexing ending doesn’t offer any sort of emotional or intellectual payoff either.

The actors do what they can with the confounding material. I’m not ready to back off my claim that Stephen Dorff has a mainstream comeback left in him. (I still see him fulfilling his Jr. Kiefer Sutherland potential one day.) He’s once again solid and convincingly ragged, even if Charlie is as confused about what’s going on as we are. Monaghan does some interesting work as Florence, but watching her character see-saw between acting like a vulgar temptress and a maternal figure is as irritating to us as it is to Charlie. (Dorff and Monaghan are also co-producers on the film.) Dafoe appears in less than a handful of scenes, but is often heard in voiceover. His presence and menace as an actor is essential in selling The Buddha as someone important because there’s really nothing there.

I suspect a big part of the problem is Jones adapting his own novel for the screen. The author, also credited as an executive producer on the film, seems to have clung too tightly to too many of the abstract ideas and mysteries in his original book. With a novel, the reader is able to chew on weighty ideas at his or her own pace, or pick up the story again in a few days. This is almost impossible to pull off in a feature film, and what may sound profound in his book comes off as exceedingly clunky in this movie. In other words, Tomorrow You’re Gone raises a lot of questions, but it completely forgets to make us want to know any of the answers.

Tomorrow You’re Gone is presented in an aspect ratio of 2.35:1. The 1080p image is arrived at with an AVC MPEG-4 codec at an average of 24 mbps. Most low-budget crime tales I’ve reviewed are predictably dingy and gloomy, and this Blu-ray certainly delivers on that front. Black levels are appropriately deep (especially when Charlie is creeping outside the house of the man he’s supposed to kill), and early scenes with drab lighting have a depressing yellow tint. However, Tomorrow You’re Gone breaks away from the pack thanks to its versatility; there are also a handful of lovely moments involving Charlie and Florence on a joyride and going on a picnic. Either way, sharpness is consistently impressive — every line on Dorff and Dafoe’s weathered faces is visible — and the motion blur we see during violent moments appears to be intentional.

The DTS-HD Master Audio 5.1 track is also surprisingly dynamic. There’s a strong sense of immersion during scenes when Charlie is in a dive bar or retrieving an important package from a busy bus station. There are also several instances of sound traveling nicely from one speaker to another (a cop car’s siren passing a bus; a gunshot hitting something off screen). The subs aren’t overpowering, but do occasionally perk up for the film’s periodic bursts of violence. Dialogue isn’t always intelligible, though that has less to do with the track and more to do with the fact that a lot of it is nonsense.

The complete lack of special features is a letdown. Again, I wouldn’t expect the filmmakers to explain every little thing about their movie. But I think Jacobson is talented, and I would’ve liked to have gotten his and Jones’ insights into the film’s mysteries.

Who or what is real? Who or what is part of a waking nightmare? Unfortunately, the most important question Tomorrow You’re Gone raises is, “Who cares?”