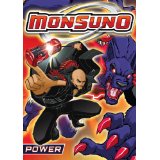 Most cartoons these days seem to be carbon copies of cartoons gone past just with different settings and characters. You got the superhero cartoon, adventure cartoon, anime cartoon, the really kiddie cartoon and the adult cartoon. Today, we have a classic I want to be a Pokemon imitator cartoon. It goes by the name Monsuno. Let us take a look inside the second volume and see if this one is more than an attempt to sell action figures and trading cards.

John Ceballos did a fine job on the first volume in this series, go check it out:

And on to the second volume of episodes:

Breakthrough: The team is stuck in Mandala, with the group known as S.T.O.R.M. blocking anybody from leaving the area. Chase wants to go look for his dad, Beyal simply wants to talk about the destiny of five members. The team is currently only four members, so your guess is as good as mine. Beyal convinces Chase to enter a meditative state and that’s when Chase realizes they need to attack S.T.O.R.M. and put an end to the blockade.

RSVP: The group is now in the Lowlands and are invited to a meeting with Dr. Klipse in the middle of the desert. But first they have to fight with Dax, a wanderer who might have fought with Chase’s dad and has a Monsuno core of his own. (hey, wait a minute I think we have our fifth character). After a brief skirmish, Chase meets with Dr. Klipse to form a temporary union against Dax to figure out where Chase’s dad went off to. Hero and Enemy alliances never quite work out.

Appleseeds: Chase and his friends three are still in the Lowlands and trailing Dax. They are then attacked by the Dark Spin mercenaries allowing Dax to escape. The team ends up at a set of Monsuno ruins where Chase might run into his dad once again. This episode debuts the Monsuno known as Evo and we get an appearance of the Dark Spin leader known as Mistress which has to be the worst and best character in the show. I will explain more later.

Eye: This adventuring party is now in the eye of a hurricane (which as it turns out is a weird type of Monsuno gone completely wrong). They come upon a couple of S.T.O.R.M. soldiers who do not recognize the team and take them to a rescue shelter. A fisherman recognizes a core on Chase’s belt and tells them that the hurricane is really a core gone awry. It is at that point that Chase and his team realize they need to save the town and face the eye of the hurricane dead on.

Deceit: Dax has deceived the team and goes off on his own to make a deal with Charlemagne, leader of S.T.O.R.M. in trade for some Monsuno essence. But when S.T.O.R.M. is able to lure Chase and the rest of the team into a deadly trap (complete with Bren yelling “It’s a Trap”), Dax suddenly disappears. Which side is he on? Or is he simply on his own side and trying to get more Monsuno power for himself?

As mentioned above, the show is a Pokemon clone through and through. The show seems to show off a new one almost every episode and we have a bunch of characters trying to collect a new monster to be able to battle with (collect them all!). I did like the team’s dynamic and that we see the team’s power increasingly just a little bit with every episode. They are far from all powerful, but they do not always appear all wimpy either when engaged in a Monsuno battle.

However, the show is not without a giant share of problems. First and most importantly, the Monsunos. Maybe it is because I missed the first five episodes but I am completely clueless about the mechanics of their battles. It seems we have power meters (but they hardly show them) which makes sense. But there is little information to indicate when the Monsuno must return to its core. Sometimes we get an obvious finishing maneuver but more often than not, it seems to be a simple couple of overpowered hits.

Furthermore, Monsunos often ignore any set of rules and can take multiple shots (especially when controlled by the heroes) and keep coming back. Also, it seems that the controllers of their core can often call their Monsuno back sometimes right away without waiting for a cooldown. How is somebody supposed to keep track without some groundwork? It makes no sense.

Furthermore, the show is built on how many clichés can we throw into a 22 minute episode. Chase, he’s the adventurer who is brash and runs into situations without thinking, Jinja, female who is a tomboy but a princess at the same time who loves one of the other characters (Beyal) and hates another one (Dax). Then Bren is the computer geek who is something of a coward and proverbial third wheel. Beyal is the peaceful Hindu who always acts very wise and then we got Dax who is either English or Australian (and looks like completely something else). He’s the loner of the group.

The villains are no strangers to clichés either from Dr. Klipse to Charlemagne to Mistress. Ah, yes, Mistress, I was going to come back to you. Without being too specific (because there might be children reading), Mistress’s voice is completely amazing. How to put this…she sounds like she is WAY too excited (in that special way) to be fighting the likes of Chase Suno. I don’t know if she belongs in a kid’s show or on the other end of a phone conversation of a 976-line. And I am not talking a phone psychic either.

The video is in 1.78:1 Widescreen presentation. The colors are actually quite good and the show has a wide variety of monsters (but uses entirely too many shades of blue) which makes for a visual feast. The backgrounds actually look worked on for many of the scenes and take it out of the bland background arena quite nicely. Sure, it has a very Pokemon, anime type feel that a lot of these cartoons have but at the very least, this does the job adequately.

For the audio portion, we get a 2.0 English Dolby Digital track. It is not exactly a lively track, but it has its share of explosions, loud fights and of course that popping sound when the Monsuno return to their core. Dialog does the job quite nicely, and honestly I did not realize that this was originally a Japanese cartoon. Again, the sound is much like the video, its quite adequate but nothing special and over the top. No subtitles could be found.

By the way, the theme song to the show is six degrees of completely awful. It is by Far East Movement and I never have heard how terrible a bunch of random techno beats and voice synthesizers could actually be. Thank goodness if you press next chapter, you can go right past it and into the actual episode.

The show has actually ran for fifty two episodes so far (do not ask me how, but I assume that the toy and trading card lines do quite well). Maybe the Japanese voices do the show more service and I am completely basing my decision on a badly translated American voice cast. But from what I see, it is a mess of clichés thrown on very shallow characters. The episodes thankfully do flow together and give the viewers a reason to turn in every week if they actually end up a fan.

Video and audio in this show are probably its strongest point as long as you do not mind some over the top madness from the likes of Dr. Klipse and Mistress. The extras are barely noticeable but who is really expecting commentaries here? If you already like the show, then you are going to buy this no matter what. But if you are looking for a show for your children to watch, I would suggest something else. Except the Wiggles. Two abominations do not make a Scooby Doo. That has been your public service announcement for this week. Thank you.

Michael Durr has been reviewing movies for the better part of fifteen years now. He primarily enjoys thrillers, sci-fi, animation and even a little courtroom drama. His favorite films include Escape from New York, the Goonies and anything with Alyssa Milano. When he’s not praising Kurt Russell as the greatest actor of our time or scratching his head over a David Lynch flick, he’s spending time at home in Texas with his lovely wife, Lori and his amazing son. How they put up with him is a mystery, but even Basil Rathbone doesn’t have the time to solve that one.
Tomorrow You’re Gone (Blu-ray) Liz & Dick