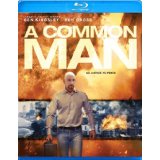 The problem with casting Ben Kingsley in this film’s title role is that the Oscar-winning actor is anything but common. He’s been a commanding screen presence for four solid decades, starting with his award-winning work in 1982’s Gandhi and continuing through his surprising performance in Iron Man 3. When Kingsley first appears in A Common Man, he immediately stands out in the crowded streets of Colombo, Sri Lanka thanks to a sharp goatee and his signature shorn dome. Turns out Kingsley’s inherent star power is the least of this movie’s problems.

A Common Man is a remake of the 2008 Bollywood hit A Wednesday. The film opens with news reports of recent terrorist attacks in Sri Lanka followed by an effective, nearly dialogue-free sequence of a man (Kingsley) leaving packages at different points — a bus, a shopping mall trash can, etc. — throughout the city of Colombo. The man, who calls himself Vincent, makes his way to his makeshift headquarters on a rooftop and calls overmatched Deputy Inspector General of Police Morris Da Silva (Ben Cross) to inform him he has planted five bombs across the city. He demands the release of four deadly international terrorists and threatens to detonate the bombs if his conditions aren’t met.

Since it’s been well established that pretty much every modern action movie is a descendant of Die Hard — for the record, A Common Man is more of a thriller/pot-boiler — Vincent’s motivations for releasing the terrorists are not exactly what they seem. The 86-minute film takes its intriguing turn just shy of the one-hour mark. Unfortunately, a lot of what precedes it is borderline embarrassing.

I’ll get into the majorly distracting synch issues in the Audio section. For now, I’ll focus on the ways writer/director Chandran Rutnam botched what could’ve been a tight little thriller. A Common Man had the potential to be a small-scale, cat-and-mouse game between Vincent and Da Silva. Instead, we get static phone conversations that are consistently cut short just as they’re about to get interesting, and Kingsley stuck on a roof acting like a madman. (“Madman on a roof” is the signature event of the Acting Decathlon; it was also a cliché back in 1998.) Rutnam also includes an undercooked subplot about media manipulation featuring a young TV reporter (Numaya Siriwardena) and a motorcycle/foot chase involving a rogue detective (Frederick-James Lobato) that would’ve been a lot more exciting if we hadn’t just met the guy two minutes earlier.

I mentioned some of Kingsley’s very best work in the opening paragraph, but it should also be noted that the actor has done a high volume of absolute junk. (A Sound of Thunder, BloodRayne…and that was just in 2005!) Once Vincent’s motivations are revealed, I can see why Kingsley was cast. The actor’s multi-culti look — which has allowed him to play Jews, Indians, Englishmen, Americans — allows him to stand in for a wide variety of people. I still think the film might’ve been better served with a more unknown actor in the role, especially when you consider Kingsley’s talents weren’t fully utilized.

Meanwhile, Cross (Chariots of Fire, Star Trek) is reduced to looking perpetually bewildered and indignant. Cross and the Sri Lankan performers who round out the cast were also victimized by (sorry to bring it up again) horrible dubbing that made it impossible to objectively judge their performances. Still, I have a strong suspicion that, even if the dialogue had been perfectly in synch, a lot of their line readings would’ve been just as painful.

A Common Man is presented in an aspect ratio of 1.78:1. The 1080p image is arrived at with an AVC MPEG-4 codec at an average of 30 mbps. The video presentation is far and away the best thing about this Blu-ray. The image is equally adept at presenting the lo-fi, full-screen newscast that opens the film as it is the eye-catching scenes set in modern day Sri Lanka. Colors are vibrant and contrast is a bit (intentionally) high, resulting in city scenes that manage to look bright and gritty at the same time. There is also excellent texture (on actors’ faces/uniforms) during close-ups. The need for deep black levels is infrequent, but still on display when necessary. Rutman’s movie may have been a letdown, but he and this Blu-ray have made his homeland look terrific.

The Dolby TrueHD 5.1 track is a big, fat wasted opportunity. It almost doesn’t matter that the track gives the viewer a wonderful sense of immersion during scenes set in the busy streets of Colombo. Cars and other passerby whoosh by the rear speakers, while ringing telephones in the chaotic police station also crop up. It’s an aggressive mix that doesn’t ever get overwhelming.

Unfortunately, it’s all for naught due to the serious issues involving the film’s dialogue. The dubbing isn’t slightly out of synch; there’s just about a full second between what we see on screen and the sound that accompanies it. (I tried two separate Blu-ray players to make sure.) This goes for sound effects too, which makes it unintentionally hilarious when a detective tries to intimidate a suspect with a baton. The most confusing part of this whole disaster is that all the actors appear to be speaking English. In other words, the horrible English dialogue on this track isn’t being imposed upon words that were originally spoken in another language; yet it still manages to be way off! For extra fun, the Blu-ray offers neither subtitles nor other language options. On the bright side, this Blu-ray is the funniest, non-Godzilla dubbing debacle since The Duelling Cavalier sneak preview.

If you look closely enough, A Common Man has some provocative things to say about the constantly shifting definitions of justice and duty. Too bad those ideas are buried under inept plotting and an inexcusably bad home video presentation — completely devoid of bonus material, by the way — that sabotages any opportunity this film had of being taken seriously.