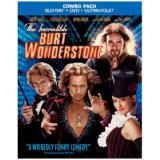 “Welcome to the wonderful world of magic.”

They say that the hand is quicker than the eye. Through the art of misdirection and skillful manipulation we have been awed by magicians ever since Glog made Ooof’s club disappear somewhere in Mesopotamia circa 20,000 BC. It’s not all skill, really. The truth is we’ve always wanted to be fooled. We’re begging for “magicians” to tamper with our sense of reality. I don’t know how fast the hand happens to be, but today we’re fooled at the speed of 24 frames per second (unless you happen to be Peter Jackson). The magic happens every time we walk into a movie theater or put a shiny disc into our magic machines. And what do we enjoy even more than being “tricked”? We love to laugh. The Incredible Burt Wonderstone has just the right amount of sleight of hand to pull it off.

Burt (Carell) (Cook as a boy) is not the most popular kid on the block. He’s the prey to the neighborhood bullies, and his parents don’t appear to even know he’s alive. It’s a mundane life until he gets a Rance Holloway (Arkin) Magic Kit for his birthday. He teams up with another kid, Anton (Buscemi) (Vanek as a boy). Together they develop a “magical” friendship logging all of their ideas into a special notebook. Ten years later they are one of the hottest acts in Vegas. Burt has become self-obsessed and a bit of a womanizer. He’s become rich and spoiled, treating those around him like crap, including his partner Anton. They also go through a lot of pretty assistants because of his abuse.

Times have sure changed. After a decade on top as the headliners of Bally’s, owner Doug Munny (Gandolfini) isn’t happy with the dwindling audience. The two haven’t changed their act in all of those 10 years. The new sensation is guerilla street magician Steve Gray (Carrey) who has taken magic to a rather gross place where he abuses his body in public. Stunts like sleeping on hot coals and holding his urine for a week have attracted the morbid fascination of the crowds. He hosts a television show called Mind Rapist. The pressure leads to a split between Burt and Anton when an attempt to upstage Gray goes terribly wrong. Burt is reduced to shows at Big Lots and retirement homes where he runs into none other than Holloway himself. With a little inspiration from the grouchy old magician and assistant Nicole…. I mean Jane (Wilde), Burt has to make reappear something he made disappear a long time ago, his humility. It’s that or Gray gets to headline Munny’s newest and biggest hotel. We all know how that’s going to work out, don’t we?

It amazes me that there haven’t been a lot of comedy films in the magic arena. One look at acts like Criss Angel, whom Jim Carrey totally roasts here, and you can see that the field is ripe for a comedy film. Credit 30 Rock director Don Scardino for putting together just the right ingredients to pull the trick off.

Those ingredients have to start with the cast. Honestly, I’ve always been able to take or leave Steve Carell. Most of the time I don’t really find him very funny. Here we see just how good he can be if given the right character and a strong supporting cast. Scardino understands that the trick to a good comedy isn’t to cast the usual list of suspects but to provide the main comedian with a cast of actors not really known for comedy at all. Carell might be the meat in this tasty treat, but he’d be totally bland without the right ingredients to wake up the flavor. The result is a brilliant Steve Buscemi as Burt’s abused partner Anton. Buscemi gets some of the best laughs in the film without really reaching for a single one. If Helen had a face that launched a thousand ships, Buscemi has a mug to launch a thousand laughs. It’s about time he put it to such a use. It doesn’t take away from his amazing dramatic performances in solid shows like Boardwalk Empire. It demonstrates a range I thoroughly enjoyed watching. Like a fresh clove of garlic that might look and smell nasty, he sure provides flavor here.

Olivia Wilde is another actor you don’t really expect to see in a comedic role. And as much as she’d be the right fit, she’s not merely garnish here. For all intents and purposes she’s the straight man and eventually the heart that Burt needs desperately to find. It would have been easy to go over the top and move into Rom Com territory, but Scardino resists that temptation, giving us just enough to care but not enough to distract. Then there’s James Gandolfini, who will never truly separate himself from Tony Soprano. He comes the closest I’ve seen here. For some reason his voice sounded a little odd, but he fills in nicely as a sort of foil for Burt, when he’s not doing a good enough job of doing that to himself, that is.

Every good stew needs some beefy potatoes, right? Jim Carrey has discovered a nice new niche to revitalize his stalled career. He’s doing more support roles these days, but he’s getting quite good at them. I think the secret has always been just a dash of Carrey goes a long way. He’s the spice in this feast, and you will not forget his character for a long time. One word of caution: Make sure you visit the restroom before sitting down for this one. Finally, the great Alan Arkin binds the whole thing together with his bookend performances. Like a fine wine, he’s only gotten better with age. If anything he’s underused here. Perhaps, Scardino knows better than I and resists even that temptation to keep this recipe just right.

We all know the best part of any meal is actually eating it. While the story isn’t anything groundbreaking, to be sure, Scardino does do a tremendous job of building these characters for us. We get to know them quickly and well. He doesn’t need to waste time with diversions. Every frame serves the story, and the end result is a film with solid pacing. It’s tight storytelling like this that keeps you entertained the entire 100 minutes. At no time do you feel the movie drag, and when it’s over, like the best of meals, you’ll feel satisfied. Not full, there’s always room for dessert. I don’t know what Scardino has planned, but I expect to be at the table, fork eagerly in hand.

The Incredible Burt Wonderstone is presented in its original aspect ratio of 2.40:1. The 1080p image is arrived at with an AVC MPEG-4 codec at an average 25 mbps. The image isn’t as strong as I would have expected. When you consider how much of the film plays out in the glitzy world of Vegas, the image isn’t very colorful or splashy. Certainly there’s some nice texture and detail found mostly on the performers’ costumes, but the image never really jumps out and pops for me. Black levels are only mediocre, and the image never embraces its environments. Yes, it’s clean and pretty clear, but this one isn’t going to scream high-definition image presentation. It’s all so very average.

The DTS-HD Master Audio 5.1 is just as mundane. There’s nothing dynamic going on here to bring you any closer into this world. Look, I liked the film better than most, but there just isn’t any wow factor on the release. Dialog is fine, but like everything else it all plays toward a muddy middle.

Making Movie Magic With David Copperfield: (8:03) The magician talks about coming up with the hangman bit for the film and demonstrates the gag with no edits. He also has a couple of cameos within the film and a running joke that never happened.

Steve Gray Uncut: (8:33) A mockumentary on the character that includes pretty much all of the bits from the film and mock archive interview footage.

Deleted And Alternative Scenes: (26:03) There is no individual select ability here. Most scenes are extended or alternate versions.

I’m often asked for the recipe to my meatballs. I don’t want to brag, but they appear to be a hit each time I’ve made them. It’s amazing the amount of trouble they can get me out of here at home. I’m sure Scardino is likely fielding a ton of similar questions on the road promoting the film. But Scardino, Burt, Anton and I all share one thing in common: “a magician never tells his secrets”.

Gino Sassani is a member of the Southeastern Film Critic's Association (SEFCA). He is a film and television critic based in Tampa, Florida. He's also the Senior Editor here at Upcomingdiscs. Gino started reviewing films in the early 1990's as a segment of his local television show Focus. He's an award-winning recording artist for Omega Records. Gino is currently working on his 8th album Merchants & Mercenaries. Gino took over Upcomingdiscs Dec 1, 2008. He works out of a home theater he calls The Reel World. Favorite films: The Godfather, The Godfather Part II, The Body Snatcher (Val Lewton film with Karloff and Lugosi, not the pod people film), Unforgiven, Gladiator, The Lion King, Jaws, Son Of Frankenstein, The Good, The Bad And The Ugly, and Monsters, Inc.
23:59 Workaholics – Season Three (Blu Ray)