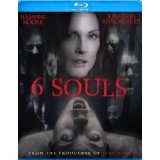 The medical community seems to be split on whether or not dissociative identity disorder — previously known as multiple personality disorder — actually exists. Well, I’m here to offer a definitive answer because I’ve just seen the dreaded disease in action after watching 6 Souls. The film can’t decide whether it wants to be trashy, watchable horror movie that regularly tries to jump-scare you out of your seat or a somewhat serious meditation on the science vs. faith debate.

Dr. Cara Jessup (Julianne Moore) would strongly disagree with my diagnosis. When we meet the widowed psychiatrist early on in 6 Souls, she’s expressing her belief that multiple personality disorder is a fad perpetuated by the media and pop culture. Cara’s father (Jeffrey DeMunn) is also a psychiatrist, and he’s playfully determined to prove his daughter wrong. He asks her to examine a seemingly timid young man named David (Jonathan Rhys Meyers) who becomes the much more aggressive Adam after a well-placed phone call. Even though Adam/David is very convincing, Cara wants to debunk the idea that he suffers from multiple personality disorder. As she investigates Adam/David’s background, she finds a common link between his personalities and realizes there might be more to come. (The movie isn’t called 2 Souls, after all.)

Actually, it wasn’t even called 6 Souls originally. Filming took place in 2008 (not a typo), and the movie was called Shelter when it was first released in the United Kingdom and other parts of the world in 2010. (The film was renamed 6 Souls for its American video-on-demand debut earlier this year.) It’s never a good sign when a movie — especially one starring a multiple Oscar nominee — sits on the shelf for an extended period of time, but 6 Souls isn’t a totally lost cause.

The script is from Michael Cooney, who explored similar territory in his superior screenplay for the enjoyably preposterous Identity. In the opening act, 6 Souls seemed like it might be a fairly straightforward psychological thriller with Cara striving to prove that Adam/David is a faker. However, once the script’s supernatural leanings start to take over — one of Adam/David’s personalities was a murder victim killed during a satanic ritual; Cara encounters a mountain witch who may help her solve the mystery — the film becomes both creepier and sillier, especially in its final act. Some viewers might interpret the notion of a killer that only seems to target people who have lost faith in God as religious propaganda. Personally, I’m more amused by the idea that the filmmakers seem to believe ghostly/demonic possession is a likelier cause of mental illness than dissociative identity disorder.

Moore gives a performance that is both assured and messy as harried single mom Cara. Her signature red hair is more disheveled than we’re used to seeing from movie stars (even when they’re playing non-glamorous roles) and it’s also an effective, not-so-subtle link to one of pop culture’s most famous skeptics. Rhys Meyers obviously has the trickiest role in the film, and he pulls it off with aplomb. The Irish actor (The Tudors) is asked to juggle multiple American accents, but I was more impressed by the other ways he created a distinct character each time. This could’ve been a potentially embarrassing performance, but now it’s something Rhys Meyers can use as an audition reel to show off the range of his American accents.

The rest of the cast includes recognizable faces like DeMunn (The Walking Dead), who brings a mischievous glint to his role as Cara’s dad. (Though I didn’t buy for a second that he’d put his daughter in danger by not telling Cara about the existence of one particularly hostile personality.) There’s also Nate Corddry (Harry’s Law), slightly underused as Cara’s jokester of a younger brother; and Frances Conroy (Six Feet Under), who shows up to chew the scenery and accelerate the science vs. faith argument.

6 Souls is stylishly directed by Swedish duo Marlind and Stein, who seemingly never met a gliding camera move they didn’t love. (Somewhere, Brian de Palma is smiling.) For me, the most impactful effect involves the bone-crunching transformations Adam/David undergoes when he switches from one personality to another. It’s fitting because the movie isn’t nearly as interesting as it is when Rhys Meyers is on screen.

6 Souls is presented in an aspect ratio of 2.35:1. The 1080p image is arrived at with an AVC MPEG-4 codec at an average of 27 mbps. Any self-respecting horror movie spends a healthy amount of time in the shadows or in the dark, so the black levels have to be on point. This Blu-ray presentation — featuring deep black levels — is thankfully up for the challenge in that regard. After some noticeable instances of banding early on (particularly in the soft-looking opening scene with Cara) the disc provides a sharp HD image, especially when it comes to close-ups. (Some wide and medium shots — especially the ones set indoors — are still noticeably inferior to the close-ups.) Flesh tones are warm, and colors come across well; I particularly enjoyed a scene toward the end that showcased a blue-ish hue for Cara and a yellowish tint for the antagonist attacking her family.

The DTS-HD Master Audio 5.1 track predictably thunders to life during the frequent jump scares. (Hello, subs!) I was more impressed by the track’s subtler moments, including a scene where we go from hearing a phone ringing faintly outside an interrogation room to the ringing becoming louder as the camera eases us into the same space where the phone is located. Outdoor and city ambient noises are vibrant without being overbearing. The dialogue is completely clear and intelligible at all times.

Can’t say I’m surprised at the complete lack of special features; the cast and crew made this movie so long ago, there’s a decent chance they don’t remember working on it.

It’s a shame because 6 Souls/Shelter isn’t so bad that it deserved to be shelved for almost five years. (At most, it should’ve only been shelved a year or two.) All kidding aside, I can’t recommend you run out and snatch this title up, but I’m glad Anchor Bay has given this flawed, watchable horror flick a proper Blu-ray release.