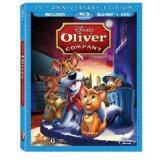 “Once upon a time in New York City…”

Walt Disney might well have been the storyteller of more than one generation of kids. Is it any wonder that when we think of such characters as Winnie The Pooh or Peter Pan our minds conjure the images wrought by Disney animators and not necessarily the classic literature descriptions? That might not be the case with this Charles Dickens story, retold through Disney’s trademark animal point of view. Oliver & Company doesn’t appear to have had the staying power of films both before and after its time. After watching the film again, perhaps for the first time since its release 20 years ago, I can’t imagine why it has never quite caught on. From a popular culture standpoint the film has all of the elements that have led to other more beloved Disney classics. The Dickens story is a familiar one, read by most literature students as a matter of course. Many of the era’s biggest names lent their voice talents to the characters, including Billy Joel and Bette Midler. The songs are about as catchy as anyone might have hoped for. Just what was it that relegated this little seen Disney adventure to the bargain bin of animation classics?

I think it was the animation that led to this film’s more obscure fate. Disney would become one of the first studios to experiment with the use of computers in animation. Most of the characters and “props” were hand drawn in the traditional way, but the backgrounds were rendered using computers. It makes the film stand out for having an odd style. While the computers allowed the animators to mimic eccentric camera moves that were nearly impossible before, it never seems to sit right with our eyes. I found the animation unsettling. Certainly the scenes approached reality in ways never before seen, but I’m not sure that audiences were ready for that in 1988. The crazy camera moves were a distraction. Like any technology, computer animation had to start somewhere. Credit Disney for being one of the first animation houses to see the potential of these machines in their work. Unfortunately, technology usually has an awkward phase, and this film underscores that place in technology, perhaps better than any film before or since.

The story very loosely follows the Dickens classic. In this case Oliver (Lawrence) is a kitten relegated to the kitten’s version of an orphanage, the cardboard box with the “free kittens to good home” sign. Oliver, unlike his siblings, never finds a home and is left wondering the streets. Instead of Dickens’ trademark Victorian England, this is 1988’s New York City. Oliver soon falls under the care of carefree dog, Dodger (Joel). Dodger is part of a gang of thieving dogs that survive by their wits in the big city. Oliver follows Dodger home to the place he shares with a few other equally carefree pups and their master, Fagin (Deluise). Now, Fagin is under pressure to pay back loan shark Sykes (Loggia), or else it’s curtains for them all. The next day Dodger and the gang take Oliver out for a day of stealing, when Oliver is trapped inside a car, trying to steal the stereo. A young girl falls in love with the kitty, and Oliver is taken back to their fancy home, where he’s introduced to the lap of luxury. Now, the gang fears Oliver has been kittynapped and stage a rescue. Meanwhile Oliver discovers that his new home has been ruled by the spoiled pup, Georgette (Midler) who controls everything “from the doorknob down”. Georgette is pleased when Oliver’s friends come to rescue him and is more than happy to help out. When Fagin sees how rich Oliver’s new family is, he decides to try and ransom Oliver back to them in order to pay off Sykes. Unfortunately, Fagin develops a conscience and can’t go through with it, but Sykes grabs the girl and decides to ransom her instead. Now Dodger and the gang have a real rescue to mount.

The members of the gang are the typical mix of eccentric and lovable Disney characters. Billy Joel voices and sings for the clever Dodger. Roscoe Lee Brown voices the Shakespearean pup Frankie… eh, I mean Francis. Cheech Marin steals the show as the manic pup Tito. It’s a dated affair, and unlikely to make a huge comeback through this Blu-ray release. Still, you owe it to yourself to check it out, particularly if you’ve never seen the film before.

Oliver & Company is presented in its original aspect ratio of 1.66:1. The 1080p image is arrived at with an AVC MPEG-4 codec at an average 35 mbps. The last DVD release of the film was one of Disney’s most disappointing efforts. I’m happy to say that all of those issues have been pretty much corrected for this high definition image presentation. The animation is quite stylish and reminds one of the old Fat Albert cartoons. But that’s where the comparison ends. Here the colors are now brilliant and quite bright. The animation lines are sharp and well-defined now. Black levels are also pretty solid here. The film now appears sharp and textured like never before. There are still the occasional blemishes and print artifacts, but they are not frequent enough to spoil your enjoyment.

The DTS-HD Master Audio 5.1 is also a notable improvement from the previous release. While I won’t exactly call this a very dynamic audio presentation, it does have a more crisp and clear quality, soundly missing in the earlier release. There aren’t many aggressive surround moments, and the film lives primarily in the center and main speakers. Not really any sub to speak of. Dialog is clear, and the songs are pretty much CD quality.

The Making Of Oliver & Company: This 5-minute feature is merely a promotional effort made to hype the film’s original release. It’s a narrated collection of clips from the film. There are very short glimpses of the voice cast, but that’s about all. The piece talks about the computer tools being used here. It’s a bit ironic that the narrator attempts to assure us that the traditional hand-drawn animation team isn’t going anywhere, but Disney has since closed its hand-drawn animation department. A sad day, indeed.

Disney Animated Animals: Again this is a minute-and-a-half pre-release promo piece that attempts to include this film into the Disney animation tradition of animals.

Sing-a-long With The Movie

This isn’t one of my favorites from Disney, and it’s not likely to earn any classic accolades. Still, the film did deserve better than the previous releases. I’m sure that fans of the film have strongly shared my disappointment. Fret no longer. There’s finally a worthy release to allow you to collect this film and place it on your library shelves for the years to come. Consider it a “free lesson in street savoir faire”.

Gino Sassani is a member of the Southeastern Film Critic's Association (SEFCA). He is a film and television critic based in Tampa, Florida. He's also the Senior Editor here at Upcomingdiscs. Gino started reviewing films in the early 1990's as a segment of his local television show Focus. He's an award-winning recording artist for Omega Records. Gino is currently working on his 8th album Merchants & Mercenaries. Gino took over Upcomingdiscs Dec 1, 2008. He works out of a home theater he calls The Reel World. Favorite films: The Godfather, The Godfather Part II, The Body Snatcher (Val Lewton film with Karloff and Lugosi, not the pod people film), Unforgiven, Gladiator, The Lion King, Jaws, Son Of Frankenstein, The Good, The Bad And The Ugly, and Monsters, Inc.
Star Trek: The Next Generation – Redemption (Blu-ray) The Sword in the Stone (50th Anniversary Edition) (Blu-ray)