The Sword in the Stone (50th Anniversary Edition) (Blu-ray) 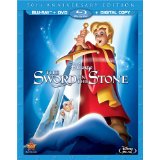 The time was that following the death of a good king, England was left without a clear heir to the throne. During the time without a king, England had descended into dark times. Suddenly as if through divine intervention a sword appeared in an anvil of stone. An inscription decreed that whosoever could remove the sword would become king. Think you’ve heard the story before? Well, of course you have. It is none other than the story of King Arthur. Most of us have heard the many stories. It shouldn’t have come as a surprise to anyone that Walt Disney himself was quite taken with the tale, when you consider it it’s about as natural a fit as one can find. Disney’s early works were replete with tales of seemingly ordinary people with extraordinary destinies. From Sleeping Beauty to Cinderella, Walt had put his own touch to many such tales.

Our story begins in this England of dark times. A wizard named Martin… eh, that’s Merlin … is sitting in his humble room awaiting the arrival of a special lad. Gifted with the ability to see forward in time, Merlin knows that this lad will soon be arriving, and it will be his responsibility to educate the boy. When the young man referred to as The Wart does arrive, it seems unlikely he could be destined for much of anything. He’s rather physically awkward and appears none too ambitious. Still, Marvin, that is to say, Merlin, takes on the task with an eagerness that becomes somewhat annoying to his companion, the owl Archimedes. The lessons involve for the most part magical transformations and a few catchy tunes. Before long “The Wart” aka Arthur finds and fulfills his destiny. This story is more about the journey than the destination. Arthur doesn’t have his encounter with the sword, often erroneously identified as Excalibur, until the last minutes of the film. There is a hint that more stories would follow, but they never really did.

It’s been 50 years since The Sword In The Stone was first released. To me the most memorable part was the wizards’ duel between Merlin and the sinister Mim. This was not one of Disney’s best collections of songs, but a few stand out. The wizard’s incantation is memorable, as is his setting the dishes to wash themselves. The scene is reminiscent of the Sorcerer’s Apprentice piece from Fantasia. While the music might not have been the greatest, the animation certainly was. There are some remarkably stunning moments in the film. The most notable of these is the rainstorm early in the movie that incorporated some live action rain into the animation. The trick was seamless and likely to go unnoticed by most fans of the film. Walt was hands-on for this film, and it shows in the attention to detail it exhibits.

There aren’t quite the number of characters in this film that usually populate a Disney outing. The few there are are all rather nicely done. Merlin was voiced flawlessly by Karl Swenson. His clever articulation of the made up Latin words is priceless. While Rickie Sorensen is only fair as Arthur, the best performance is hands down the narration by Sebastian Cabot. As he did with The Many Adventures Of Winnie The Pooh, Cabot provides a narration that is instantly wise and equally warm. You might also recognize the voice of Alan Napier as Sir Pelinore. Yes, that’s Alfred himself from the Adam West Batman series. Together these elements provide an experience that doesn’t seem to exist any longer in children’s animation films.

The Sword In The Stone is presented in its original aspect ratio of 1.75:1. The 1080p image is arrived at with an AVC MPEG-4 codec at an average 30 mbps. Yet another completely superior re-release from Disney. This was another film that suffered greatly in its DVD 45th Anniversary edition. The film wasn’t even presented in its original aspect ratio then. All of that has been corrected. Now colors are vivid and are wonderfully displayed. Contrast allows for wonderful animation lines and even pretty solid shadow definition. The film is as sharp as it must have been a full 50 years ago when it was first seen in movie houses. There are a few blemishes, if you’re really looking for them. Here’s a suggestion: don’t.

The DTS-HD Master Audio 5.1 is not nearly as impressive. Of course, the original is mono, so I don’t really expect or want any aggressive re-mix here. My complaint is that there is still not any depth to the audio. There is no bottom end here, and everything lives in a muddled mid-range that could be tiresome after a spell. The songs are clear but still sound a bit flat to me. Dialog is clear, and perhaps that’s all one can ask here.

Music Magic – The Sherman Brothers: This was the first Disney film for the Sherman Brothers. It’s not their greatest material, but they went on to provide the soundtrack of many of my generation’s childhood. Here they talk about working on the film and let us in on some music that didn’t make it to the final cut.

Animated Shorts: Here you get the 7-minute shorts Knight For A Day featuring Goofy and Brave Little Tailor starring Mickey Mouse himself.

Disney Song Selection: Here you can check out the music clips from the film along with an option to allow you to display the song lyrics as you watch the film.

All About Magic: This excerpt from Walt Disney Presents television is hosted by Uncle Walt. He shows us a few magic tricks.

Alternate Opening: This is a new feature that presents a different meeting between Merlin and Arthur. It’s told through narration and storyboards.

Certainly this film is a footnote in the tales of King Arthur and is less about the mythical king and more about magic and wizardry. For kids, that was just fine with us. Heck, we don’t even have him using his real name until the end of the picture. All of the trademark Disney elements are there: the underdog coming out on top, plenty of music, wonderful animation, and plenty of heart. It’s the perfect storm of children’s entertainment. “That’s what I call a wizard blizzard.”

Gino Sassani is a member of the Southeastern Film Critic's Association (SEFCA). He is a film and television critic based in Tampa, Florida. He's also the Senior Editor here at Upcomingdiscs. Gino started reviewing films in the early 1990's as a segment of his local television show Focus. He's an award-winning recording artist for Omega Records. Gino is currently working on his 8th album Merchants & Mercenaries. Gino took over Upcomingdiscs Dec 1, 2008. He works out of a home theater he calls The Reel World. Favorite films: The Godfather, The Godfather Part II, The Body Snatcher (Val Lewton film with Karloff and Lugosi, not the pod people film), Unforgiven, Gladiator, The Lion King, Jaws, Son Of Frankenstein, The Good, The Bad And The Ugly, and Monsters, Inc.
Oliver & Company: 25th Anniversary Edition (Blu-ray) What Maisie Knew (Blu-Ray)