Posted in: Disc Reviews by Michael Durr on August 7th, 2013 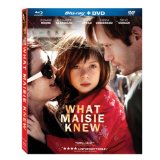 For those who don’t know, I have been married twice in my life. I am currently going through my second divorce. At nearly thirty eight years old, I have lived the relationship life of arguably several lifetimes but something usually keeps me coming back. Am I done with love? Only time will tell. Today’s blu-ray review is about a six year old girl who sees life through the divorce of her mother and father. Something tells me we are in for a very long and bumpy ride.

Susanna (played by Julianne Moore), a mom puts her six year old daughter, Maisie (played by Onata Aprile) to bed. Susan decides to sing “Rock a Bye Baby” to the daughter before breaking out the acoustic guitar and playing a few gentle chords as Maisie slowly goes to sleep. The day begins again or rather we see Maisie paying for some pizza as we hear a heated argument in the background.

As Maisie and her nanny, Margo (played by Joanna Vanderham) go out to the patio to enjoy a few slices, we learn the argument was between the two parents. It is at this time we meet the father, Beale (played by Steve Coogan), an extremely busy but charming art dealer. This trend continues as we watch Maisie briefly in school before arriving back at home to enjoy a nice peanut butter sandwich and yet another argument.

We witness the locks being changed at the front door. This of course leads to a scene later where Beale is locked out of the home. As an argument ensues through the door with Maisie looking on, we realize that this marriage is on the rocks headed for disaster. This is further amplified when Beale shows up the next day at school to take Maisie. However, Susanna shows up at the same time and after another argument takes the child instead.

Later that night, Maisie has a sleepover and well mommy is having a different kind of sleepover. We learn that the mother is a rock star (as convincing as Julianne Moore can be at one) and we also meet Lincoln (played by Alexander Skarsgard of True Blood fame), Susanna’s new boy toy. The next day the mother takes the child to the counselor but not before she tries and fabricates some lies into the mind of a very innocent six year old child.

It is obvious by now that the mother and father are in the midst of a custody battle for young Maisie. Both sides want custody and Maisie just wants a place where she can feel comfortable. The film arrives at a turning point however when Beale, her father takes her to his new apartment. He opens up the door to reveal the new place and her usual nanny, Margo. Something is different here for sure, and it is not just the Sock Monkey. But as we learn, we realize that Maisie’s adventures are just beginning.

Divorces are always hard, especially on the children that are left behind. We watch this film one hundred percent through the eyes of a six year old girl thanks to a wonderful performance by Onata Aprile. We start to understand the events around us even though many times they are just fragments from the little girl’s point of view. The parents are equally irresponsible but in different ways, with Susanna solely interested in her fading rock and roll career while Maisie’s father goes off to foreign countries to peddle his wares.

Throughout the course of the movie, two new relationships are formed. Maisie and her nanny, Margo and Maisie and her step-father, Lincoln. Alexander Skarsgard and Joanna Vanderham both do excellent jobs here. Alexander arguably has the sleeper performance of the movie as he melds into being a comforting spot for the young girl. Even though Julianne Moore and Steve Coogan play generally distasteful characters (Julianne more so), they each use their acting experience to bring home solid performances.

This film is actually based off an 1897 novel by Henry James and then brought up to a contemporary setting. What I think I like about the film is that it never gets creepy (except for arguably one scene that thankfully does not go anywhere) or strays anywhere from the eyes of Maisie. This movie is all about simplicity. Even the ending is pretty simplistic and serene. Now, the ending is a bit worrisome if you happen to dip your head into the legal ramifications of what’s going on, but its peaceful and probably the best close that could be reasonably thought of.

The video is presented in 2.40:1 widescreen at 1080P. This film is set in modern day New York City and the picture blossoms with each location that comes upon the screen. The color and sharpness of the picture almost echoes the film’s tone perfectly. Each setting springs to life almost as much as young Onata does. There are no real problems to speak of and the colors never seem off or out of place. The picture is sharp and does exactly what it should do.

The audio is presented in 5.1 English Dolby TrueHd (English Stereo 2.0 Mix also available). As with the rest of this movie, the sound is never anything more but simplistic. This movie is almost one hundred percent dialogue with only a little bit of music thanks to Julianne’s character. The dialogue is clear and the music never overtakes the movie like we often see in many other films. It works well, and nothing can be said in poor taste or an overly good one. A peaceful track for sure. Subtitles are included for English SDH and Spanish speakers.

As mentioned throughout this review, divorce is rough and hard on everybody involved. But even though I am going through my second divorce, I am almost glad that I never had a child that would have had to suffer through it. Children are often the true victims of any divorce and honestly life is cruel enough without having to go through that too. In What Maisie Knew, thanks to some wonderful performances we really see what divorce is like to an innocent child.

The film also showcases great video and audio which help to complete the tone and mood of the film. The extras are not really numerous but they are very welcome and help us understand it that much more. I give a hearty (but simplistic) recommendation to this film. Sure, it is not going to be for everybody but it was very timely for me. The question for me remains what am I going to do for the rest of my life, but the more important question might be what does the character of Maisie do for the rest of her life? Hopefully it is a good one. Enjoy folks.

Michael Durr has been reviewing movies for the better part of fifteen years now. He primarily enjoys thrillers, sci-fi, animation and even a little courtroom drama. His favorite films include Escape from New York, the Goonies and anything with Alyssa Milano. When he’s not praising Kurt Russell as the greatest actor of our time or scratching his head over a David Lynch flick, he’s spending time at home in Texas with his lovely wife, Lori and his amazing son. How they put up with him is a mystery, but even Basil Rathbone doesn’t have the time to solve that one.
The Sword in the Stone (50th Anniversary Edition) (Blu-ray) Banshee: Season One (Blu-ray)