Posted in: Disc Reviews by Michael Durr on August 19th, 2013 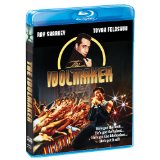 My best work is often done behind a computer or somewhere where my face is not on display. I am not the most handsome guy despite the fact I have been described by those of the female persuasion as otherwise. But I have talent, loads of it and I am always waiting for the next moment to show it off. Perhaps I can take a cue from our movie today, The Idolmaker and use my talent to make others around me stars. Maybe I should just go shave instead.

New York City, 1959. Check out the black leather jacket, red pants, Cuban heels and pantyhose style socks. This is one Vincent Vacarri (played by Ray Sharkey). He passes by Tommy (played by Paul Land) who is running a street con game for some extra money. Tommy catches up with him and tells him about his band which has a new lead singer named Jimmy Ryan. Vinnie complains that the singer does not have the look and that his blond hair is never going to work.

They soon depart and Vinnie goes to his 9 to 5 job as a waiter at his brother Mario’s (played by John Aprea)restaurant. Mario wants to know why he is late but Vinnie shrugs it off and starts to wait tables. But Vinnie’s friend, Gino (played by Joe Pantoliano) comes in and tells Vinnie that he has to go right now so they can possibly sign a record deal. Before Mario can protest, the two are off to the recording studio.

However, the terms are not favorable and Vinnie wants nothing to do with the contract. He later goes home and is consoled by his mother (played by Olympia Dukakis) who urges him to go see his father and ask for money. Vinnie shrugs it off and instead goes to the local club where Tommy is playing the saxophone and the crowd is going crazy. However, the scene completely changes when Jimmy Ryan (played by Jimmy Carter) gets up on the stage and the crowd becomes bored instantly and looks for something else to do.

Vinnie sees something in Tommy however and tells him that if he wants to be a star, then he will show up at his house at 9:00am sharp the next morning. Tommy shows up, Vinnie starts to show him the songs as well as pointers on what to do with the audience. Tommy is now Tommy Dee, a singer that is on verge of stardom. Vinnie however realizes that he has to get some money for this startup, and there is only one place that he can go for the money, his father (played by Steven Apostlee Peck). Can Vinnie convince his father that he is indeed, the Idolmaker?

This film goes on to show the rise of Tommy Dee’s stardom and then Vinnie decides to try his hand at making another Idol when he discovers Caesare (played by Peter Gallagher). However, they are many pitfalls along the way. We also are on board for when Vinnie meets his love interest, Brenda Roberts (played by Tovah Feldshuh) who is an editor for a top selling teen magazine.

The film is actually based on manager Bob Marcucci who promoted several stars including Frankie Avalon and Fabian. Now while the film is obviously based on Marcucci, they do not directly mention Frankie Avalon and Fabian, but there are tons of obvious comparisons here to Tommy Dee and Caesare. The film has many strong performances including Ray Sharkey, Tovah Feldshuh, Peter Gallagher, and Joe Pantoliano. It all blends together pretty well, but unfortunately there are many issues along the way.

The first and most obvious issue is that much like the two teen idols, the film is extremely sanitized. Every time it dips into sensitive territory, it seems to rise up its head immediately often without any sort of consequence. Sure, there are some minor consequences, but nothing horribly damaging. Perhaps I am looking for something more racy here but for a movie that constantly flirts with that idea and never gets there, it can be more frustrating than anything.

The video is presented in 1.78:1 widescreen at 1080P. For a thirty plus year old movie, it actually looks pretty good with grain in all of the right places. The colors are sharp and it feels like a film out of the late 50’s/early 60’s when it was actually made 20 years later. Detail is also well done here to the point where you can tell every little thing that is going even away from the performances. Shout Factory did an excellent job of restoring the picture to premium standards.

The audio is presented in 5.1 English DTS-HD Master Audio (English DTS-HD 2.0 Mix also available). However, it is very unfortunate that I cannot appreciate the audio as much as the video. Volume is uneven and has a bad habit of the music going to blaring level while the dialog gets down to a whisper. Audio drop-out does happen here and there too and there are even a few obvious audio dubs where most would not normally notice it. It is not bad, the musical numbers are still enjoyable, I just have a feeling that the source material was not much to work with. Subtitles are included for English speakers.

Idolmaker actually won a Golden Globe for Best Actor (Ray Sharkey) and was nominated for another in Best Motion Picture in the Musical/Comedy category. It certainly had its moments and while I like the film, I just felt that sometimes it did not go far enough. Ray Sharkey and Tovah Feldshuh do some great work here (and we get to see the first big part of Joey Pants’ fantastic acting career) and that is worth seeing for sure as well as the musical numbers.

The disc has some technical highlights in the video department but unfortunately despite all of the musical numbers, the audio falls a little flat. The extras are highlighted by the excellent director commentary but it would have been nice to see some recent interviews with the actors and actresses who made this film. This is a tough recommendation and I think it hinges on how much you enjoy the music of the early 60’s and the environment. If that is your thing, then this is an easy sell. Others will have trouble, but should be able to get through it. Enjoy kiddoes.

Michael Durr has been reviewing movies for the better part of fifteen years now. He primarily enjoys thrillers, sci-fi, animation and even a little courtroom drama. His favorite films include Escape from New York, the Goonies and anything with Alyssa Milano. When he’s not praising Kurt Russell as the greatest actor of our time or scratching his head over a David Lynch flick, he’s spending time at home in Texas with his lovely wife, Lori and his amazing son. How they put up with him is a mystery, but even Basil Rathbone doesn’t have the time to solve that one.
Perry Mason: Season 9, Volume 2 Cavalcade (Blu-ray)