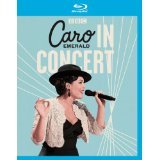 Caroline Esmeralda van de Leeuw didn’t know she was a jazz singer until somebody told her. Growing up in Amsterdam, she was too lazy and impatient to properly learn how to play an instrument. Fortunately, she was blessed with a sultry, soulful and sassy singing voice. Caro Emerald has used that voice to smash chart records in the Netherlands. Earlier this year, her second album, “The Shocking Miss Emerald”, reached #1 in the United Kingdom. And that’s where she happened to be when I was introduced to her funky brand of jazz.

This Blu-ray captures her performance at the art deco BBC Radio Theatre in London as part of the In Concert series. It’s a relatively intimate, 300-seat venue that suits her music perfectly. In fact, if it weren’t for those pesky seats, I could easily imagine the theatre spontaneously turning into a dance hall with everyone in the audience joining in on the fun. I should mention that, in my former life, I was a pretty avid swing dancer. So I’m always looking for potential places to lindy bomb, and cool new music to dance to.

Caro Emerald: In Concert satisfies both of those desires, though the music is obviously the star. The show features tunes from her swingin’ debut album, “Deleted Scenes from the Cutting Room Floor” — which spent 30 weeks atop the Dutch charts, breaking the record previously held by Michael Jackson’s “Thriller” — and the more romantic “The Shocking Miss Emerald.” Since Emerald only has two albums to draw from, the set could’ve easily become repetitive. Thankfully, the singer and her band are more than dynamic enough to keep things interesting throughout the 90-minute show. On top of that, the music on each of her albums is distinct enough to keep the audience engaged.

That music is a pop/funk/jazz fusion that incorporates Latin beats and hip-hop. (Often in the same song, like “Riviera Life.”) During In Concert, the horn section stands a few feet away from someone named DJ Git Hyper on the turntables. I realize some purists will find Emerald’s brand of jazz off-putting. While I didn’t think it always worked, I found it to be consistently interesting. More importantly, I like that the singer and her band appear to have arrived at these choices organically. In other words, they’re not just throwing a bunch of styles in a blender and hoping for the best; this stuff seems to genuinely reflect Emerald’s eclectic musical background.

It also helps that Emerald’s got the chops to belt out intimate songs in the style of Shirley Bassey or Dinah Washington, two of her musical inspirations. Before her In Concert performance of “I Belong To You”, she refers to the song as a tribute to Bassey (and I could easily imagine it being a James Bond theme). Emerald also performs a cover of “Mad About the Boy”, which is probably best known for Washington’s 1952 rendition. The rest of the show is a lively mix of Emerald’s personas, including girl-power temptress (“Just One Dance”), party girl (“Liquid Lunch”), and head-over-heels lover (“Completely”). (The singer is expecting her first child and recently postponed her 2014 U.K. tour.) Besides her powerful voice, Emerald also displays a nice dexterity with the scat-like lyrics of the more up-tempo stuff.

The rest of the band gets to show its stuff too, with the horn section shining on “Dr. Wanna Do” and the entire ensemble getting in on the fun in “That Man.” The “A Night Like This”/“Stuck” one-two punch ends up being a great, jubilant way to close out the show. Meanwhile, In Concert was a great, jubilant way for me to discover this exciting artist.

4. Pack Up the Louie

Caro Emerald in Concert is presented in an aspect ratio of 1.78:1. The 1080i image is arrived at with an AVC MPEG-4 codec at an average of 28 mpbs. To be honest, I was a little taken aback by how great this concert looks. The sharpness and clarity on the base medium shots is simply striking, and I felt like I had a particularly good seat at the BBC Radio Theatre. Closeups are equally good, revealing all the little dust flecks in the air that are illuminated by the stage lights. In fact, (depending on how vain Emerald is) the sharpness might be too good: you can clearly see pock marks and beads of sweat form on her face. (She shouldn’t worry; she still looks sensational.) The Blu-ray isn’t asked to do a lot of visual heavy lifting; it’s a straightforward live performance delivered in an outstanding way.

The DTS-HD Master Audio 5.1 track generally has Emerald’s voice sounding as clear as the picture looks. In a few instances, it felt like her vocal was bit buried amidst all the big instruments on stage, but that tends to happen in any live performance vs. album recording. The propulsive keyboards tended to stay in the front speakers, while the drums and hi-hat popped up on the rears. It’s all brought together by a more aggressive bottom end than usual, which I didn’t mind. Those low grooves made my living room feel like a mini dance hall. You also have the option of listening to the show in LPCM Stereo.

Rehearsal Performances: The slightly dressed-down singer (she’s still rocking a beret) runs through “Tangled Up” (3:17) and “That Man” (3:34) during a rehearsal. Obviously, the band is not quite as energetic as they are during the real show, but everyone still sounds great. There is no Play All option.

Interview with Caro Emerald: (13:13) The singer talks about growing up listening exclusively to her father’s preferred classical music, and being part of Motown cover bands and acapella groups in her youth. When someone told her she should enroll in the Jazz Conservatory, she didn’t know what either of those words meant. Besides Bassey and Washington, she counts Rihanna, Beyonce and Amy Winehouse among her influences. This isn’t the most dynamic interview in the world, but you might want to check it out if you’re an aspiring singer and you want to see how someone else made it.

The Blu-ray also includes a booklet with an essay by Alex Lester of BBC Radio 2, which covers a lot of the same information included in the interview.

Like I said earlier, I’d never heard of Caro Emerald before I got my hands on this Blu-ray. Not only am I fan of her music now, but she’s got me thinking about staging a swing dancing comeback.