Posted in: Disc Reviews by Brent Lorentson on October 9th, 2013 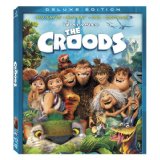 For years it seems DreamWorks Animation has been living in the shadow of Pixar.  Sure, DreamWorks has had their success with Shrek and Ice Age, but when you stack the films next to Pixar’s library, you see Pixar just seems to be the best at what they do.  That is until The Croods came along; with the new DreamWorks release it would appear the animation studio has stepped up their game and released their best-looking 3D film to date.  My expectations were not too high with this release, but I was at least reliEepd I wouldn’t be watching Ice Age Ten: The Ice is Still Melting.  With a theater screening filled with what appeared to be thousands of little screaming children (remember in Gremlins when they were watching Snow White?) before the film I had been face- palming myself, feeling this had been a bad idea, but once the lights dimmed and the film began, my worries faded away.  The story may be a little weak, but there is something there that hooked me and kept me engaged throughout the Croods’ journey, and it turned out to be good eye candy that the entire family can enjoy.

From the start no time is wasted as Eep (Emma Stone) narrates the dangers of living in this dangerous world.  As far as Eep knows, she and her family, the Croods, are the last of their kind.  Fearing the night (and everything unfamiliar or unknown) the family takes shelter in a cave until the sun reappears and everything is thought to be “safe” by Grug (Nicolas Cage), the father and leader of the group.  Grug is a neurotic, overprotective parent who simply expects at any point something could happen and kill them all, so with the exception of family hunts, they never stray too far from the cave.  And as a teenager, living this cramped lifestyle surrounded by her family is becoming overwhelming for Eep, and her sense of adventure (and being a rebellious teen) is just too much.  Besides, living in a cave with your overbearing father, mother, brother and grandmother from sunrise to sunset is enough to make anyone want to venture anywhere despite all forms of danger.

Eep manages to escape the cave after seeing a light in the middle of the night.  She’s mesmerized by this light that seems to travel on its own along the canyon walls.  The light eventually leads her to a young man disguised in a warthog costume who claims to be able to create fire.  Guy (Ryan Reynolds), possibly the only other human in this prehistoric world, believes that the world is ending and claims it’ll be destroyed by earthquakes and fire and that to survive they must escape.  When Grug wakes to discover his daughter is missing, it’s no surprise when he panics and goes after her.

After the inevitable destruction of the cave, it seems there may be something to these prophecies Guy is having. The film then shifts gears and turns into a road-trip-esque type picture.  To some extent this could be the story of the first family road trip with enough disastrous hilarity to make any Griswold smile.  Grug’s constant disappointment as Gran (Cloris Leachman) manages to survive throughout the film is one of the film’s highlights that seemed to deliver laughs from the audience, though my favorite bit with her involved Grug using her as a coin to flip in the air.

The world the Croods venture into is dangerous and beautiful but seemed to remind me too much of the world of Pandora that Cameron created in Avatar.  The creature designs are absurd and beautiful all at once (elephantmice for example).  The moment the characters entered this new land all I could think about is how I wished we were brought here sooner, and it simply left me wanting more.  Later in the film the animators show off with a 180-degree diving scene plunging the character in the water.  It’s these visuals that are worth forking over the cash and escaping to this other world the 90-plus minutes.

Personally, it’s not so much the story that had me along for the ride, but the beautiful imagery throughout. For those looking for a story, well, it’s fairly direct; it’s a family simply traveling to find safety before everything around them is destroyed.  But while we are along for the journey, a message is sprinkled in for the dads watching, that you can’t protect your little girls forever.  You can broaden it and put it towards all parents and their kids.  Sure, there is also the message beaten over our heads about not being afraid of change, but really it was change in their environment that almost killed them, so shouldn’t that change be something to be afraid of?

What held the film back the most is that it had a moment to step up and not just be a standard animated flick and become a film that would endure.  This leads me to ask this to all animated films, (the exception goes to Up): when will the next Bambi come our way? You know, the film that rips out our hearts and has our young ones crying their eyes out.  Sure, this seems harsh, but come on, why are films so scared to delve into an issue that, let’s face it, we all have to go through, and sometimes these issues are easier to face, discuss, and confront in the form of a film.  There’s a moment where The Croods could have confronted this issue of loss, but instead cops out and delivers a scene so absurd it baffles the mind how the logic of this scene works.  Audiences don’t need to be coddled; come on, studios, hit us in our hearts and make us feel, and I promise we will love you for it. (End of rant.)

The Croods is presented in its original aspect ratio of 2.35:1. The 1080p image is arrived at with an AVC MPEG-4 codec at an average 30-25 mbps. Like most digital computer-animated films this one transfers quite nicely to Blu-ray. It’s not so much the colors but the textures that stand out here. There is some beautifully rendered water. Even fire looks about as realistic as I’ve seen in the world of computer animation. When the film wishes to show off its colors it does so magnificently, to be sure. Fur and feathers also look photo-real at times. Black levels are outstanding. When this movie fades to black, they mean black. Not gray. Not blackish. Black.

The DTS-HD Master Audio 7.1 can best be described as playful. Often it’s the silly noises of the strange creatures that invade the surround speakers. The rears get plenty of play, and it’s quite an aggressive mix overall. The dialog comes through just fine. The score never intrudes but has a strong enough presence to be acknowledged. Subs come full alert as the prehistoric world of the Croods comes apart, literally, at the seams. There’s certainly a full enough sound field to engage the young and old alike.

This is a better than average collection of extras. Rather than just entertain the static child, they often encourage participation and creative activities. I would absolutely like to see more of this sort of thing from animated feature releases on Blu-ray.

The Croodaceous Creatures Of The Croods:  This is an interactive list of many of the creatures in the film. You select any you wish to learn more about.

Belt’s Cave Journal: (6:15) Guy and Belt tell the story of how they met a creature named Jack. He’s part bat and part bunny. The short ends with them encouraging you to use your creative talents to tell your own family’s story.

Crood’s Cuts: (8:20) This is the deleted scenes. There are four with intros from the two writer/directors. One is actually fully finished animation. The others utilize storyboards to fill in the blanks.

Be An Artist: You can select from several characters, and an animator shows you step by step how to draw them.

When all is said in done, The Croods is your average animated kids’ film. There were a few good bits but really nothing that has me hailing this a classic or something to remember at year’s end.  This could have been so much more, but for me this just fell apart in the story department.  I wanted more bonding between Guy and Grug.  More involvement from the other family members also would have been nice, but they just seemed to be filler.  And filler is what the movie comes down to at this point, beautiful filler with a few laughs on the film release slate.

Brent Lorentson is a horror writer and film critic based out of Tampa, Florida. With a BA in Digital Film, he co-wrote and co-directed Scavenger Hunt. His short stories have appeared in various horror anthologies. In 2019 his short script Fertile Blood will be a part of the anthology horror film Slumber Party. He is currently working on his first novel A Dark and Secret Place set to be released in late 2019. Favorite Films: Taxi Driver, Fight Club, I Saw the Devil, The Wild Bunch, Dawn of the Dead, A Clockwork Orange, Pulp Fiction, Heathers, The Monster Squad, and High Fidelity.
Caro Emerald: In Concert (Blu-ray) “31 Nights Of Terror” Curse of Chucky (Blu-ray)