Posted in: Disc Reviews by Gino Sassani on October 9th, 2013 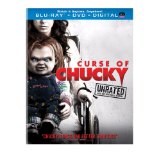 When an unexpected package arrives at the home of Nica (Dourif) and her rather crazy mother Sarah (Quesnelle), they have no idea what it is or who might have sent it. We already know what’s in the familiar-shaped package. That’s right. After nearly a decade absence, Chucky’s back.

“You know, that doll. It looks familiar somehow”.

When a horror series hasn’t been heard from in 10 years and shows up direct-to-video, I’m scared, and it doesn’t have anything to do with whatever creature/monster/entity that stalks the movie. Direct-to-video is the last stop for once thriving franchises on their way to cultural obscurity. That’s exactly what I expected from Curse Of Chucky. It was made on a paltry $5 million budget, much less than any of the previous films. The last two sequels resorted to camp silliness, and Chucky was reduced to a clown. For most of us the franchise actually ended somewhere in 1991 with Chucky 3… at least that’s what I once believed. Let me tell you just how wrong I was. Chucky is indeed back, and he’s better and scarier than ever.

“It’s a doll. What’s the worst that could happen?”

So Chucky arrives, and it doesn’t take long for someone to turn up dead. Nica is left alone in an expensive and large home where she has been wheelchair-bound for her entire life. Funerals bring family, and before you know it Nica’s sister Barb (Bisutti), her brow-beaten husband Ian (Elliott), their daughter Alice (Howell) and her $400-a-week babysitter Jill (McConnell) arrive to crowd Nica’s life. Of course, Barb’s got her eye on selling the house and getting her share of the money. She also hopes to put “fragile” Nica in a home. Well, Nica’s not so fragile, and Chucky’s got plans of his own. Little Alice takes to the doll, and Chucky has found himself a new playmate.

At first it appears the film will fall into that all-too-familiar ground where the cast becomes fodder for the bad guy. There’s also plenty of the predictable child being the only one who believes the doll is alive. You know how that goes: “I didn’t say it, Chucky did.” “Chucky did it.” We’ve seen all of this too many times before. If that were the sum total of Curse Of Chucky, I’d say pass on to something really scary. But Curse Of Chucky happens to be really scary.

The cast is led by Brad Dourif’s daughter Fiona. We all know she got the job because her father has been the voice and often even the face of Chucky for over 25 years. Let’s just say he has juice in the franchise, and I’m not talkin’ Tropicana. Anyone who tells you different is lying. How she got the part isn’t important here. What is vital is that she absolutely earns the part. Fiona’s character spends most of the film in a wheelchair. It could have just been a contrivance, but I promise you that she brings so much more to the role than that. She’s totally natural in the chair, and I’m not sure I’ve ever seen an actor do a better job of selling that as merely a fact of their lives. Her movements appear practiced, honed over a supposed lifetime with the disability. She fights with a natural fierceness against the notion she can’t take care of herself. The chair isn’t a contrivance, because her disability hasn’t really handicapped her, and by the end of the film she understands that more than ever before. She ends up being the most worthy adversary Chucky’s ever had, both physically and mentally. Her casting also helps to pull off a nice red herring in the film, and there is a very strong connection between her and Chucky. It’s not what you think. The truth is, I fell in love with her performance, and it doesn’t hurt that the movie’s pretty damn good, after all. She’s also got one convincing maniacal stare.

If you’re shooting a low-budget film, you have to make compromises somewhere. Something in the production value, cast, or effects must be sacrificed. Credit Don Mancini for turning his liability into one of the film’s greatest assets. Most of the money went into building the set of the house. It is in the house that 95% of the film takes place. It’s perfect. Now we have what is basically a haunted house film with a lot of the old-fashioned elements that have made them so popular since the 1920’s. It’s a beautiful set design that was built perfectly to maximize budget dollars and scares.

It doesn’t hurt that there is some startlingly sweet camera work going on here. If you’re a fan of the Universal classic horror films, there are some terrific nods to be found here. There’s a particularly effective shot that involves lightning flashing from a window. The quick flash pan effect gives us just a nanosecond shadow silhouette of Chucky wielding his butcher knife on the walls. Another cool shot involves the camera’s point of view perspective. The image is shot high from a room’s ceiling corner through a perfectly-spun spider web.

You might have expected the franchise to finally revert to rendering Chucky himself in CGI. Of course, you can’t completely ignore the modern tools of the trade, and there are some computer animated moments. Almost all of it, however, is still puppets and animatronics. It’s a real doll that wields these knives and axes, and I can’t tell you how much more effective having real elements like that is. It makes the actor reactions that much more sincere, and your mind knows it’s there just because of the thousands of minute ways an object interacts with its environment. Whatever Hollywood might like us to believe, we know when something is real. We know. It’s far more labor-intensive and puts a heavy burden on the shooting schedule, but the results are worth every minute. Thanks, Don, for understanding that so well. And thanks to Tony Gardner for creating and manipulating these puppets.

The supporting cast is well above average for a low-budget horror film. Each and every one of these folks is convincing. They are completely fleshed out characters. You may still not care for them when they get theirs, because some of these people aren’t necessarily nice, but we believe they are indeed real people. There’s an affair going on that will absolutely take you by surprise.

The kills are satisfying, but it’s the creepy moments in between that really make this a superior movie. Chucky’s good at playing hide and go slay. He’s still knows how to crack wise, but the overt attempts at humor from the last two films is gone. Mancini listened to the fans and not only returned Chucky to his roots, but I think he went one better. I might get some flack for saying this, but I think this is my favorite from the series. Jennifer Tilly’s Tiffany does make a coda appearance that has me a little worried about where this is going. If they can continue to do this, I say bring on more. Stick around for the credits for a scene that brings back Alex Vincent who played Andy from the original film now all grown up.

Curse Of Chucky  is presented in its original aspect ratio of 1.78:1. The 1080p image is arrived at with an AVC MPEG-4 codec at an impressive average 35-40 mbps. This high-definition image presentation doesn’t look low-budget at all. The image is sharp and crisp. The thing is so sharp there are wonderful reflection images in things like knives and a pool of blood. It’s actually a very effective device in the film that requires this kind of razor-sharp image to pull off. Black levels are wonderful. You can see facial detail in the darkest of shots. You also get incredible shadows and silhouettes that build on the film’s excellent atmosphere. I dare you to find a flaw.

The DTS-HD Master Audio 5.1 is not quite as impressive as the image, but it does the job admirably. Much of the film involves the elusive Chucky, and it’s those subtle footfalls or movement of curtains that sell the gag. The result is well-placed surrounds that might not be terribly aggressive, but I’d settle for effective any day. There’s not a lot of sub going on here, merely enhancement but it sounds natural enough. The Joseph LoDuca score is absolutely thrilling. Evil Dead fans know LoDuca’s work well. But did you know he’s provided such television shows as Xena, Hercules, and the recent Spartacus with their captivating scores? Dialog is perfect throughout.

There is an excellent Audio Commentary with Don Mancini, Tony Gardner and Fiona Dourif. They appear to have some fun and provide pretty solid insight.

Deleted Scenes: (6:17) There are six with a handy play all. Nothing great here that should have remained in the film.

Playing With Dolls – The Making Of Curse Of Chucky: (15:34) Lots of love-fest material here. Everybody simply adores everybody else. Once we’ve established just how wonderful everyone is, we move to the set design. Guess what? Everyone loved that too. Finally, we do get to some good stuff that actually gets us to the behind the scenes material.

Living Doll – Bringing Chucky Back To Life: (8:35) This really is the good stuff. We get to see all of the aspects of how they brought Chucky off.

Voodoo Doll – The Chucky Legacy: (7:08) This is Chucky History 101. I’m glad to see Mancini admit that the overt silliness of the last two films was not what fans wanted.

So what has Chucky been up to the last decade? The movie doesn’t really fill in too many of those blanks. We know he was coaching in the NFL for a few years, but we’ve since lost track of the little devil. The film does fill us in with some back story that takes place long before the first film. We get a bit more of Charlie and what he was doing before the police chase that got him killed in the toy store. It’s a pretty nice blend of old and new. I’m so thankful they didn’t take the common path of recent horror franchise resurrections. No remake/reimagining or retool. This is a continuing story that fits in very nicely with the previous films. We haven’t really seen this Chucky since 1991, “but believe me it was worth the wait”.

Gino Sassani is a member of the Southeastern Film Critic's Association (SEFCA). He is a film and television critic based in Tampa, Florida. He's also the Senior Editor here at Upcomingdiscs. Gino started reviewing films in the early 1990's as a segment of his local television show Focus. He's an award-winning recording artist for Omega Records. Gino is currently working on his 8th album Merchants & Mercenaries. Gino took over Upcomingdiscs Dec 1, 2008. He works out of a home theater he calls The Reel World. Favorite films: The Godfather, The Godfather Part II, The Body Snatcher (Val Lewton film with Karloff and Lugosi, not the pod people film), Unforgiven, Gladiator, The Lion King, Jaws, Son Of Frankenstein, The Good, The Bad And The Ugly, and Monsters, Inc.
The Croods (Blu-ray) Teenage Mutant Ninja Turtles – Ultimate Showdown