Posted in: Disc Reviews by Michael Durr on October 19th, 2013 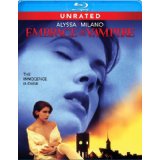 So, it is the Upcomingdiscs.com 31 Nights of Terror and your favorite columnist, Mr. Michael “Hey, were you expecting John Ceballos?” Durr has stepped in for a review about some of his favorite subjects. Cheesy Horror flics and Alyssa Milano. Today’s title is an absolute cult classic and that is the original 1995 Vampire thriller, Embrace of the Vampire. So strap yourself in, and prepare to watch something so beautiful that it brings a tear to this columnist’s eyes. (Tissue please)

*Warning*, the following post may contain absolute chicanery. Any attempt to make sense of this review should probably require a trip to the local psychiatrist’s office for an immediate appointment. While there, you might want to ask for my mind back. I seemed to have lost it on my way to the Badminton for Divorcees convention. Thank you for your cooperation.

Let us take a trip back in time. Like the pages of a diary, we plunge into a world that time has forgotten. We see a young man (played by Martin Kemp) sitting in the woods trying to look alluring when his beautiful maiden (played by Rebecca Ferrati) approaches. There are tender kisses and a lot of busty fraternization as this is a show of true love. The fair maiden leaves and the man is left alone in the forest. He falls asleep.

He is soon awoken by three very topless nymphs who seduce him. Now, this is how men in the forest typically like to be woken up. He struggles briefly but soon he gives in like any normal man would with three very alluring and topless females at his side. So right, so right. Then one of the nymphs take a bite. So wrong, so wrong! And another bite. They are not nymphs but rather blood sucking vampires who prey on open-shirt males in the forest. They give him immortality and a cool glowing blue ankh necklace but at the price of his SOULLLLL.

We listen to the vampire who has been providing voiceover and learn that in order to preserve eternal life for himself he must find one who desires him in the same bloodline as his true love. He has indeed found her in fact and as luck would have it, she goes to a small college nearby. We then see Charlotte Wells (played by Alyssa Milano) asleep on her bed. She must desire the vampire in three days and be taken by him or else the vampire will enter eternal sleep. There is just one problem though, she loves another.

That another is her boyfriend, Chris (played by Harrison Pruett) who is also going to the same college. However, enough of the background and pretty boy men, we want more Alyssa, I mean Charlotte. The vampire speaks to Charlotte and she wakes up in a trance. She sleepwalks out into the courtyard and then down the sidewalk. Meanwhile, we hear her boyfriend call her and leave a very needy message. Dude, you need to learn personal space.

We continue to follow Charlotte as she walks up some stairs and then some steps. Up and up she climbs. Also, her skirt is just perfectly open during all of this to reveal her panties, yeah that was a coincidence. Anyway, she is soon in the vampire’s lair (or a reasonable facsimile) where she becomes seduced by the vampire. He wants, he needs her. But alas, he can’t have her since she still desires Chris. Blah, blah, this Chris dude better look like Thor because this is ridiculous. The vampire ends up giving her the glowing blue ankh necklace and sends her on her way but time is running short.

So, boyfriend finally shows up (not even close to Thor) and finds Charlotte out in the courtyard asleep. He takes her in his arms into the dorm and somehow passes security, goes up a flight of steps, enters her room, and places her down onto her bed. He then (I am not making this up) takes off his shoes and gets into bed with her. They fall asleep. Okay. Next morning comes around, and Charlotte wakes up to find Chris next to her. Yes, he is still clothed. As it turns out, she’s actually a virgin, three days shy of her eighteenth birthday (Trivia, Alyssa was actually in her early 20’s when she did this role).

I guess that would explain the whole I am only going to remove my shoes thing but still sleep next to you part. He explains himself and she believes him. Hey, he only took off his shoes, he must be telling the truth. Chris was just protecting Charlotte and he was concerned about her safety. They kiss for a little bit, and of course Charlotte stops Chris because they should not go too far. (Suddenly, I have visions of Robin Hood: Men in Tights Chastity Padlock Belts but I digress). She then gets up, asks Chris to turn his head and gets undressed so she can ready for school.

Naturally, he sneaks a peek (and so does the audience) as Charlotte slips off her clothes. Wait, we should observe a moment of silence here. *rewind*, okay and alright, we are back. They get finished talking and leave. Charlotte and Chris walk down the hallway, pass other dorm mates and walk out of the college dorm in broad daylight. Seriously, what college is this? Every female dorm I ever went into, you had some mother hen at security asking fifty questions for every male that walked into the place. Plus, there were little things called curfews too. Well unless you were very good at hiding under beds. *The More You Know* *Rainbow*

That’s our story. Basically, we have a vampire who is trying to seduce Charlotte into desiring him so he can take her like the three nymphs took him all those years ago. Or else in three days, he goes into eternal sleep. Along the way of this zany adventure, Charlotte gets into things that every virgin freshman does in their first year of college. There is smoking, drinking, hot photography session with a very bisexual female, and stealing your best friend’s party clothes while she lays dead somewhere because she got bit by a vampire. The usual stuff.

The soon to be ex-Mrs. Durr (she doesn’t know it yet), Alyssa Milano is simply stunning in this film. The film might have a paper-thin plot (it is prime and ready for a Rifftrax if I ever heard one) but this was a very successful attempt to show off one of the hottest women in the world in some of the sexiest scenes imaginable. It also had some interesting performances too, particularly by Martin Kemp (who you actually feel a little sorry for) and Jennifer Tilly (who does all she can with her mere 5 minutes).

There are laughable scenes all over this thing. My favorite (in a terrible way) involves Alyssa sitting in class (by the back of course) when Martin appears out of nowhere to seduce her in a sleeveless tank top (trust me, the clothes are important). Now the trick is, nobody else can see him so she of course keeps talking to air and telling him to stop. Meanwhile, the rest of the class and the teacher are wondering what the heck is going on. The funny part is that he keeps re-appearing behind her, closer and closer each time as if it were suspenseful. But maybe due to the movie or Martin’s attire, it takes everything for me to not bust out laughing.

Truthfully, I like the movie a lot even beyond my high school and college crush. It’s hokey but still is a good way to kill ninety minutes. By the way, another trivia moment but Martin Kemp was actually a member of the band called Spandau Ballet. Think of the song “True”, yep that one will be playing in your head for a while. Jordan Ladd and Rachel True also make for some good supporting role fodder in this flic too.

The video is presented in 1.85:1 widescreen at 1080P. I remember watching this one in DVD, and it looks a lot better than it ever has. I am not saying this is reference quality or anything but that is mostly due to the straight to video low budget nature of this one. They do a lot with very little and sure the lighting for the darker scenes is to be desired, but that is not exactly why we are here anyway. More than acceptable all around.

The audio is presented in 5.1 English Dolby TrueHd. Sound is also improved here. The dialog is nice and crisp and the sound effects (albeit cheesy) hold their own. Surround is actually used here to some degree and as the trend has been, they make great use of very little. There are a couple of good sensual mood pieces too. Subtitles are included for English SDH and Spanish speakers.

There are many movies that I never expected to get a blu-ray release. This is certainly one of them but I am glad it did. It was the first time I had seen the film in several years, and it’s funny how a new format can make you see so many things that did not occur to the viewer before. Embrace of the Vampire is not meant to be Hitchcock or Shakespeare or even Paul W.S. Anderson, it is akin to those Cinemax films they show late at night to draw in men of questionable character (I know nothing!).

For the fans of the movie this has very good video and audio but unfortunately no extras to be found. I think a commentary (again, I’m available), or some interviews (if any of the stars are actually willing) would be great to enhance the cult status of this film. It is a fun romp and a great film for those who can appreciate it. Very much recommended and here is hoping that Alyssa lifts her restraining order against me so I can finally follow her again on Twitter. Enjoy kids.

Michael Durr has been reviewing movies for the better part of fifteen years now. He primarily enjoys thrillers, sci-fi, animation and even a little courtroom drama. His favorite films include Escape from New York, the Goonies and anything with Alyssa Milano. When he’s not praising Kurt Russell as the greatest actor of our time or scratching his head over a David Lynch flick, he’s spending time at home in Texas with his lovely wife, Lori and his amazing son. How they put up with him is a mystery, but even Basil Rathbone doesn’t have the time to solve that one.
The Fifth Estate “31 Nights Of Terror” True Stories Of Horror