Posted in: Disc Reviews by Archive Authors on November 28th, 2013 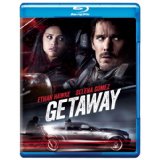 What makes a bad movie? What makes a good movie? The standards are getting lost in murky waters, because many of the critics have no interest in film history and the clear record of what is great and what is garbage. That goes for many filmmakers too. Their standards are what works in the last 12 months and how to try out the latest technology. Unfortunately they often forget the tried and true basics like good writing and good acting. Ethan Hawke gets a lot of these small movies. Sometimes it’s a fantastic independent film like Before Midnight (part of a series of films for director Richard Linklater including Before Sunrise and Before Sunset) and sometimes it a genre picture that costs nothing that makes a fortune like The Purge or Sinister. Hawke knows what he’s doing. He wants to make every kind of picture, because he knows that’s the only way to stay viable. Sometimes it doesn’t work out.

Getaway is a simple genre picture made to make people happy. The goal of this movie is to have as many car crashes possible in under 90 minutes. Is that so terrible? Not really, but the problem is that it does get monotonous. There are too many crashes. One wouldn’t expect that to be a problem, but it is. I’ve sat through six Fast and Furious movies, and I thought they were all crap except for the last one. Why? Fast and Furious 6 gave up any pretense of being taken seriously and just went all the way to make the movie fun. They spent a ton of money, but they finally just made the movie fun.

I think that’s all Getaway is trying to be. Fun. I just can’t judge it that harshly, because I think it delivers exactly what a lot of people expect from a movie like this. Cheap thrills. I spoke earlier of directors using new technology to good effect, and I think that’s done here. It’s clear that every car has multiple cameras, so much so that it is actually part of the plot. It makes it possible for a myriad of endless cuts which some have complained about. I think that one of the strengths here is the use of these multiple cameras. It is true that the script is fairly shoddy, but that is one of the biggest weaknesses in Hollywood. They are constantly green-lighting films with weak scripts. The script is the cheapest expense a Hollywood studio has, yet it is the most important element.

Ethan Hawke has been getting better and better as an actor and works hard here and is on screen nearly non-stop. Do not fault the actor here. He did his job. Selena Gomez is young, and this is a stretch for her. She’s not entirely believable, because she playing a poor little rich girl who’s kind of bitchy and has a mouth on her.

There is a stark, mindless minimalism to this film which some people want to compare to Drive. Drive was more solidly rooted in character. There is a trashy, low-rent middle-European setting which is like the Taken movies, which seems a more apt comparison. The endless stream of inept Bulgarian cops somewhat distances us from the action. It makes it seem less like Smoky and the Bandit and more an exercise in American isolationism. Never go to Europe, because you will encounter some faceless Euro trash villain who will treat you like a worthless interloper. In this case, the faceless villain is literally faceless throughout almost the entire length of the movie. He is voiced with typical hammy relish by Jon Voight.

Getaway is presented in its original aspect ratio of 2.40:1. The 1080p image is arrived at with an AVC MPEG-4 codec at an average 25-30 mbps. Colors are quite muted in the long shots. Close-up shots deliver a little more pop. The image is certainly sharp, but don’t look for any real texture or detail. It doesn’t really matter because the cuts are manic enough that you couldn’t catch it even if it were there. Black levels are average. Warner did make sure the product placement detail is there, however. You get too many shots of the “Shelby” foot pedals. A very average high-definition image presentation intended for those among us with the attention span of a 5-year-old.

The DTS-HD Master Audio 5.1 is not near as aggressive as you might expect. There’s plenty of ear candy in the tire squeals, gunfire and crashes. It’s clear and dynamic, but it’s not really spread out in the surround field. There’s no real immersive presentation here. You are a spectator, and the audio track never lets you forget it. The subs do come alive as expected. Dialog is clear enough. Also a very average presentation.

The extras here are a complete joke. Not a single feature clocks in over a minute and a half. Yet Warner makes you work hard to watch them. No play-all. It takes longer to get to them than it does to watch them. Obviously, you can’t get anything more than promo stuff in such short helpings.

I think what I want to say is that I defend this movie’s right to be a piece of crap. I think that was the ambition of many of the people involved. In other words, they wanted to make a movie about a lot of car crashes and nothing more. The problem is too many car crashes will render you unconscious.