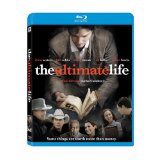 I’m not so sure the same fans who made 2007’s The Ultimate Gift a hit on the home video market — and spurred the creation of this sequel — will be very grateful for this tepid follow-up. The Ultimate Life stiffly and earnestly re-iterates the first film’s emphasis on appreciating non-material delights, and sprinkles in a worthwhile message about the importance of leaving a strong legacy behind. Unfortunately, this film’s own legacy places it with the long list of sequels that don’t live up to the original.

In case you didn’t see the first film, here’s a quick catch-up. To inherit a piece of his grandfather Red’s (James Garner) fortune, spoiled under-achiever Jason Stevens (Drew Fuller) had to complete 12 assignments centered around a different gift (like money, friends, family, etc.) within a year. Life lessons were learned. Jason also connected with single mom/nurse Alexia (Ali Hillis) and her dying daughter Emily (Oscar nominee Abigail Breslin), while seizing control of his family’s multi-billion dollar foundation. In an uninspired case of “tell, don’t show,” this information is conveyed to the audience at the start of The Ultimate Life via bland title cards.

The sequel finds Jason (now played by Logan Bartholomew) and Alexia still together, but there’s trouble in paradise. Jason intends to propose to Alexia, but he’s so distracted fighting off the greedier members of his family that he doesn’t even realize Alexia intends to move to Haiti to assist in the country’s relief efforts. Jason goes to longtime family lawyer Ted Hamilton (Bill Cobbs) for advice. Ted presents Jason with Red’s journal — not to be confused with a diary, because “diaries are for girls” — which reveals Red’s rocky path toward becoming a billionaire.

Fans of The Ultimate Gift deserve a disclaimer: if you’re watching this sequel because you were invested in the Jason/Alexia relationship, you’re going to be disappointed. The Ultimate Life spends the majority of its time in flashbacks that show how the ambitious teenage Red (Austin James) in the 1940s became successful oil magnate Red (Drew Waters) in the 1950s and ‘60s. (Garner briefly appears as Red in a pre-taped message at the start of the film.)

Both The Ultimate Gift and The Ultimate Life are based on novels by Jim Stovall. The faith-based, inspirational stories don’t name check — nor do they need to name check — any specific religion because the idea of appreciating the little things in life seems pretty universal and non-controversial.

It’s a shame that seasoned pros like Peter Fonda (as a rancher who helps guide teenage Red), Lee Meriwether (blink and you actually might miss her) Garner and Cobbs don’t get much of anything to do. The flat direction by Michael Landon Jr. and the wooden performances from the less-experienced cast members could be forgiven if the story flowed better.

The episodic flashbacks feature an inconsequential detour into a World War II battlefield and a fateful encounter with a hobo/Magical Negro. They’re also pretty formulaic; Red’s drive to become a billionaire causes him to lose sight of his real fortune…his family. (Rinse, repeat.) At least that helps explain why most of Red’s kids became bratty adults. The few sparks in the story come courtesy of James and Abigail Mavity as the teenage version of Red and his sweetheart Hanna. Fans of the first film will also likely enjoy seeing Red and Ted meet for the first time.

The Ultimate Life aims to uplift and inspire its audience. Too bad the movie is more likely to inspire groans.

The Ultimate Life is presented in an aspect ratio of 1.78:1. The 1080p image is arrived at with an AVC MPEG-4 codec at an average of 33 mbps. The TV-style aspect ratio certainly adds to the overall feeling that what you’re watching is a Lifetime/Hallmark-quality production. Luckily, the Blu-ray has the formidable Fox studio muscle behind it. The result is a rich, textured HD image that really shines once the action jumps to the past. It’s a good thing too, because I was a little discouraged by how flat and occasionally soft the early present-day scenes. I suppose it turned out to be a bit of a rope-a-dope because the period scenes that depict small-town Tyler, Texas and the state’s expansive ranches look noticeably brighter and sharper than some of the stuff at the beginning. Colors become vibrant once teenage Red leaves his depressing, slightly de-saturated Baton Rouge home. There is also impressive detail on those period costumes even during medium shots. In other words, the visual presentation started slow before really coming into its own. (Which is more than I can say for the movie itself.)

The DTS-HD Master Audio 5.1 track is more limited than I would’ve hoped. A significant portion of the film takes place outdoors, but the rears offer (at best) a subdued sense of ambient noise and immersion. Instead, the surround field is mostly used to reproduce Mark McKenzie’s score. (Tinkly pianos for the present-day scenes, mournful strings for the mournful flashbacks.) The track briefly explodes to life during a scene set at a high school swing dance. The booming subs also help sell the idea that teenage Red was in a World War II battlefield (instead of the random forest where they actually filmed this). Dialogue comes through clearly and the track is well-balanced overall.

The Heart of The Ultimate Life: (8:06) This featurette features Stovall and cast members repeatedly reinforcing the movie’s themes. The repetition is actually fitting for a movie that feels the need to spell everything out for its audience. There is also on-set footage of the actors goofing off.

Interviews with cast members, writer Jim Stovall, and producer Rick Eldrige: (44:16) There are 10 interviews in all, with the cast members discussing their characters and what attracted them to the project. The most noteworthy part of these interviews is that these actors show more personality here than they did in the movie. Features a Play All option.

Deleted Scenes: (5:21) Five scenes, but only one is really worth a look. That would be the very first scene that pops up, featuring Bartholomew’s Jason self-consciously flubbing a taped message he’s recording for his charitable foundation. There’s also a little bit more Peter Fonda. No Play All option, and you can’t select the scenes individually. However, they are split into separate chapters.

“One Life” Music Video: (3:40) Tamela Mann peforms the soulful song that plays over the closing credits, but she is completely undercut by this hilariously bad/amateurish music video. The video features her awkwardly superimposed over clips from the film. It really has to be seen to be believed.

The movie’s heart is obviously in the right place. The Ultimate Life espouses some laudable virtues, but ultimately fails as both a worthy sequel and as a dynamic, entertaining film in its own right.

If you really want to try and live The Ultimate Life, you should skip this clunker and spend some quality time with a family member.