Posted in: Disc Reviews by Gino Sassani on December 25th, 2013 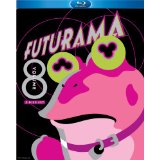 Futurama was the brainchild of Simpson veterans Matt Groening and David X Cohen. With the growing popularity of their iconic cartoon, it was no surprise that Fox would tap the team to bring another show to the network. When Futurama premiered in 1999, it was a combination of The Jetsons and The Simpsons. That would be ironic for those of us who think the Simpsons theme is a direct knockoff of The Jetsons. It was 1000 years in the future, and the joke was that no matter how much things changed, they hadn’t really changed at all. The space-age series would use many of the writing and art team from The Simpsons. That meant the character designs, at least the humans, would look exactly like the people in the other show. The writing would include that same subtle wit that implanted tons of references for the adults who were watching. The show never seemed to click with the kids, but it was not really meant to. The subject matter was considerably more adult in nature, and there really weren’t any cuddly characters. All of this likely led to Fox’s decision to cancel the show after four years. It wasn’t a quick and painless demise, either. The show suffered through months of purgatory. It was on, then off again. The final episodes were moved around and often rescheduled. In the end it was an uphill battle, and Futurama lost.

But the cancellation was not to be permanent. The show found new legs on cable and finally with a handful of home video movies. Interest was once again high, and Futurama was back from the grave. Unfortunately, the show really has reached the end now. This collection contains the show’s last episodes.

Fry (West) is a pizza delivery guy when he is accidentally frozen in suspended animation. When he awakens, it’s 1000 years later. The galaxy is made up of robots, aliens, and humans. He finds that personalities from his own time have survived to the future, as heads in jars. Nixon is once again president and up to his old tricks. You never know which 20th or 21st century celebrity you’ll find in a jar in this future. Calling upon his delivery skills, Fry joins the crew of a Planet Express spaceship run by a distant nephew relative of his. The crew is made up of the one-eyed beauty, Leela (Segal), on whom Fry has a crush. She is the ship’s captain. The ship’s robot, Bender (DiMaggio) is not the role model that Robby once was. He gambles, steals, and is on a mission to destroy all human-based life. But he’ll complete his mission all in good fun. The science officer is professor Farnsworth (West), a somewhat senile old goat, who was Fry’s nephew. The crew encounters many strange species and situations on their quest to deliver packages across the cosmos.

Here’s a rundown of these final episodes:

Bender meets his folk hero while the crew is delivering to a prison. He scans his guitar and figures that will make him a folk hero, too. He soon learns that just because you have a guitar, it does not make you a folk hero. When he heads to the rails to “live the life”, it’s the usual mayhem.

The characters enter a 2D world when the Professor uses the craft for “street” racing. It’s a cool experience until they realize that their flat selves can’t eat and digest food. They’ll starve to death if they can’t get back to a 3D world.

This spoof of ET has Fry the alien looking for a friend. A kid comes of age by invading the Earth, and it strands Fry on the invading planet with the kid. Earth gets tough and bans exports to the planet, including television. Can the aliens survive without their 1000-year-old television broadcasts?

You know those romantic getaways never work out on these shows. The two are finding it hard to get some “alone” time. They end up on a resort that caters to only one couple at a time…until Leela’s ex-boyfriend shows up.

The gang rescues a mining crew from the Sun and are made heroes and the new official fire department. Bender is so drunk on being a hero, he’s suspected of starting fires just so the crew can put them out. Looks like he’s going to need someplace to store all of those hero medals.

This anthology has the crew taking on parts of classic Saturday morning cartoon spoofs. Nixon tries to cut down the violence on a G.I. Joe spoof by dubbing in new words. There’s a very diabetic version of Strawberry Shortcake. The best and longest is a take on Scooby Doo with Bender as Scooby and Fry as Shaggy. Guest voice George Takei is part of this one. They’ve got the style and story elements down pat here.

It’s been a year since the suicide on air of Calculon. He was the top soap opera acting robot who killed himself to make his death scene more realistic. Bender and Fry are still bummed, and the Professor repairs the robot only to find his style is no longer wanted. It’s a real obvious spoof of William Shatner here.

Bender gets jacked, and he’s sold for parts. The last piece is his behind, which is so shiny it could save lives on a lighthouse, if Bender’s willing to make the sacrifice.

This spoof on the Jack & The Beanstalk tale has Leela coming down with something called Squidification. She’s growing tentacles and turning into a squid. The Professor has Fry take the ship to market and sell it so he can afford to find a cure. Fry ends up trading it for magic beans. The stalk leads to a genetics lab in the clouds and Leela’s last chance to be normal again.

Not what the name implies…okay, maybe it is. This is not a spoof of Game Of Thrones, but rather Close Encounters Of The Third Kind. An alien ship is bombarding the Earth with destructive tones and Fry must go back in time, at least in his head, to the day he was frozen. Somewhere in that past holds the key to what these tones want.

Murder On The Planet Express:

The crew has trust issues and are on their way to a team-building retreat, but they’re trapped on the ship with a dangerous shape-shifting alien who wants to eat them. The only way they can survive is to trust each other….yeah, good luck with that.

Zoidberg just can’t get a woman because of how bad he smells. He falls in love with a flower girl who can’t smell. He can return her sense of smell, but he fears she’ll dump him when she gets that first whiff.

In the last episode of the series Fry and Leela are getting married. But Fry accidentally freezes the rest of the universe, and they must live the rest of their lives alone together.

The episodes are presented in a full-frame format. This is as good as the show has ever looked, or honestly should look. You get a startling 1080p image brought about using an AVC/MPEG-4 codec. Colors are ultra-bright in this presentation even when you consider the often less than 20 mbps bit rate isn’t very respectable. Still, the film couldn’t be any cleaner, sharper, or more solid looking. You really gain an appreciation for the upgraded visuals. The amount of detail on this kind of animation would make the classic Disney animators take notice. Lines are clean and pure. This is Futurama at its pie-in-the-sky, beyond-expectation best.

You get a pretty good DTS-HD Master Audio 5.1 track. I wasn’t quite as impressed with the sound as the video, but this is still some sweet stuff. You get plenty of whirling and buzzing ambient sounds, and again the space scenes are where it all comes together best. Of course, dialog is the big cheese here, and it’s perfectly placed and crystal clear at all times.

I do not like the cardboard case. It does not hold the discs securely once it’s out of the slip box. It might look good, but it will not be a good place to store your discs for the long haul.

Deleted Scenes: (16:05) These are in various stages of production.

Inside Futurama – The Writing Room Of Tomorrow: (13:25) Get a look at the four walls inside trailer 795 where the writers worked.

Audio Commentary on EVERY EPISODE!

It’s always hard to say goodbye. Futurama rose from its own ashes more than once. This time it appears to be for good. Who knows? The Blu-ray collections will allow us to relive those moments for years to come. They look and sound great. But what if the show returns again, you ask. “Why, I oughta kill ya for just asking.“

Gino Sassani is a member of the Southeastern Film Critic's Association (SEFCA). He is a film and television critic based in Tampa, Florida. He's also the Senior Editor here at Upcomingdiscs. Gino started reviewing films in the early 1990's as a segment of his local television show Focus. He's an award-winning recording artist for Omega Records. Gino is currently working on his 8th album Merchants & Mercenaries. Gino took over Upcomingdiscs Dec 1, 2008. He works out of a home theater he calls The Reel World. Favorite films: The Godfather, The Godfather Part II, The Body Snatcher (Val Lewton film with Karloff and Lugosi, not the pod people film), Unforgiven, Gladiator, The Lion King, Jaws, Son Of Frankenstein, The Good, The Bad And The Ugly, and Monsters, Inc.
The Ultimate Life (Blu-ray) Grudge Match