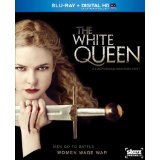 The idea that “behind every great man, there’s a great woman rolling her eyes” far predates its adoption as a feminist slogan in the middle of the previous century. The White Queen — a sumptuous, rushed combination of Game of Thrones-style high-stakes scheming and Tudors-style regal bodice ripping — uses Britain’s late medieval history as a jumping off point for pushing a number of notable women to the forefront.

“The War of the Roses has been raging for nine long years. Two royal houses, Lancaster and York, fight for the throne of England.”

It sounds simple enough, but that brief historical signpost at the start of Ep. 1/“In Love with the King” doesn’t begin to prepare you for the tangled web of political intrigue that lies ahead in this 10-episode miniseries. The show opens in 1464 with Yorkish King Edward IV (Max Irons) on the throne and concludes more than 20 years later with the ascension of a new monarch. But while the men were busy with their countless battles, it was their women — wives and mothers — who were waging the real war by exerting their considerable influence over royal matters.

“We’ve no need for scheming women.”

The miniseries is based on three Philippa Gregory novels: “The White Queen”, “The Red Queen” and “The Kingmaker’s Daughter.” As a result, the show is largely told through the perspective of those three remarkable women. Elizabeth Woodville (Rebecca Ferguson) is the uncommonly beautiful commoner who marries Edward and becomes the “White Queen.” Lady Margaret Beaufort (Amanda Hale) is the intensely devout “Red Queen” obsessed with seeing a Lancanstrian ruler back on the throne. Lady Anne Neville (Faye Marsay) is the youngest daughter of the Earl of Warwick (James Frain), Edward’s savvy cousin who earned the moniker of “Kingmaker.” The show chronicles the romantic entanglements and power plays of these women as they — along with Edward’s brothers George (David Oakes) and Richard (Aneurin Barnard) — try to position themselves on the throne.

Before diving into any sort of critical analysis, I feel like I need to mention what a great looking show this is. (I’ll get into more detail in the Video section.) The White Queen filmed its episodes in Bruges, Belgium. The region’s castles, palatial sets and lush countryside elevate the show; they also go a big way toward transporting the viewer back to that time period. It was money well spent considering a TV show’s action scenes rarely match their big screen counterparts. (So why even try to top them?) The battle scenes in The White Queen are few and far between, and the few we do get — like the climactic clash in Ep. 10/“The Final Battle” — tend to be duds. On the plus side, the action in the pivotal Ep. 5/ “War at First Hand” was surprisingly effective.

The show originally aired on BBC before a more sexually-explicit version debuted on Starz in August. (Oh, Spartacus, what hast though wrought?!) Besides serving to titillate the audience, sex actually plays a crucial role here and gets at the heart of why women wielded so much power. Much is made over the necessity for as many male heirs as possible. To me, that’s a more compelling expression of feminine power — and powerlessness, if a woman keeps having baby girls or can’t get pregnant at all — than the way the show plays up Elizabeth’s alleged supernatural abilities. (Elizabeth’s mother Jacquetta, played wonderfully by Janet McTeer, stood trial for witchcraft in real life; the show takes this historical fact and runs with it.)

Of course, I realize The White Queen isn’t exactly meant to be a documentary. (And I’m not familiar enough with this particular time period to call out the writers or producers for any historical inaccuracies.) Fortunately, the show features a bunch of compelling performances that keep the drama thoroughly watchable and enjoyable. Ferguson is fantastic as Elizabeth. The actress makes Elizabeth’s transformation from fresh-faced, love-struck girl to steely, determined protector totally convincing. She’s a strong complement for Irons, who makes Edward seem boyish, even in the king’s advanced years. Fortunately, Irons also has enough presence to command the screen when Edward needs to exert his will. Ferguson carries the first few episodes before Elizabeth gradually fades in to the background of the action.

Luckily, Hale and Marsay are there to pick up the slack. Hale is terrific at showing you how Margaret’s passions and religious fanaticism went hand-in-hand, while Marsay announces survive-at-all-costs Anne as a character to watch from very early on. (The actress looks *much* younger than her 27 years.) I also enjoyed Barnard’s dashing, deeply conflicted turn as Richard III, which is a departure from Shakespeare’s famous depiction of the character as a twisted hunchback. Frain (True Blood, Tron: Legacy), McTeer (a two-time Oscar nominee) and Caroline Goodall (the Schindler’s List actress plays the haughty, humbled Duchess Cecily) are some of the better-known names in the cast, and easily command every scene they’re in without much effort. Warwick, in particular, is depicted as one of the story’s antagonists, but Frain’s charismatic turn makes him a man of his time who would do anything to improve his family’s standing.

The show’s lightning-fast pace is a bit disconcerting early on when you’re trying to familiarize yourself with all the characters. (It doesn’t help that Brits in that time only used about five different names; so good luck sorting out all the different Edwards, Henrys and Margarets.) The good news is the show never gets boring, even if does get a bit repetitive in its final hours. The bad news is life-changing events tend to fly by fast enough to make your head spin, and way too quickly to make a strong emotional impact. In fact, the biggest problem I found with The White Queen was that it tried to cram 20 years of complicated history/politics — and, frankly, at least three TV seasons worth of material — into 10 episodes.

The White Queen is presented in its original aspect ratio of 1.78:1. The 1080i image is arrived at with an AVC MPEG-4 codec at an average of 22 mbps. This is one of the most impressive visual presentations I’ve had the chance to review. (TV or movie.) It’s a stunning, versatile transfer from Anchor Bay that excels at everything it’s asked to do. For example, the close-ups preferred by director James Kent (who helmed the first three episodes) reveal every detail, especially when the camera is trained on Ferguson’s fair, freckled face. Contrast is also spot on, giving us terrific black levels in the series’ darker second half and resplendent whites in the more romantic first hour. Colors also explode to life during any lavish set piece in the royal court. On the other hand, the image becomes convincingly grimy when the action moves to the battlefield or the Tower of London.

There is also a slight, pleasing amount of softness in some outdoor scenes, which lend the show a more cinematic quality. Most impressive of all is how the show used sunlight (or the “effect” of sunlight) in many indoor scenes. The rays streaking in through windows looked dazzling, just like this show.

The Dolby TrueHD 5.1 track isn’t quite as spellbinding as the video presentation, but it certainly does the job. I suppose I expected a slightly more aggressive mix from such a grand production. Instead, the surround speakers are largely used to enhance John Lunn’s lush, urgent score. Conversely, the subs are only intermittently used to enhance effects like galloping horses, while the rears tend to immerse you in the medieval world only when an obvious opportunity presents itself. (As in Ep. 3/“The Storm.”) The track more than makes up for those slight shortcomings by being incredibly well-balanced. Dialogue comes through very clearly, which is crucial if you’re going to keep up with all the scheming.

All of the bonus material is presented in HD and is contained on Disc 3. It’s a somewhat redundant collection of featurettes, none of which clock in at more than five minutes.

The Making of The White Queen: (3:24) Cast and crew talk about the show’s epic scale and filming in Bruges. (As opposed to filming In Bruges.)

Series Overview: (4:27) A quick survey of the miniseries’ timeline, with an emphasis on the women from that period.

Book to Series: (4:15) This was one of the more interesting featurettes. Gregory briefly discusses her three books, which are told from a different woman’s perspective. Meanwhile, White Queen head writer Emma Frost talks about the decision to make Elizabeth the protagonist, Margaret an antagonist, and Anne a pawn.

The History Behind The White Queen: (3:37) Examines the historical, stranger-than-fiction romantic entanglements depicted on the show, and how they differ from Shakespeare’s accounts of the time period.

Queen Elizabeth: (3:02) Character profile featuring comments from Ferguson and others. Focuses on the way Elizabeth fearlessly protected her family.

King Edward IV: (2:36) Character profile featuring comments from Irons that focuses on the real-life uproar caused by the king’s marriage to Elizabeth.

The Heir Apparent: (1:32) Focuses on the era’s strong emphasis on having sons, which helps explain why Elizabeth was pregnant in practically every episode.

Women in a Man’s World: (1:47) Historical accounts are typically written by men, and women tend to be portrayed as victims. This featurette explores how the show set out to flip the script

Conjuring Up The White Queen: (1:57) As I mentioned before, the show definitely plays up the witchcraft angle with Elizabeth, but this mini-doc briefly explains why magic and mysticism were very much a real concern at the time.

Dressing The Queen: (2:37) A much-deserved spotlight on costume designer Nic Ede, who explains how came up with different color schemes for the various families.

If nothing else, The White Queen inspired me to pick up a history book and read up on the War of the Roses. (Oh, who am I kidding? I don’t have any history books lying around; the show did inspire me to Google this fascinating period in world history.)

The show is overstuffed, but it’s absolutely worth a look if you enjoy dishy historical dramas. (And it turns out producers may not have needed to rush so much; Starz is looking to develop a follow-up miniseries.) The White Queen is especially worth a look if you get to watch it on this splendid-looking Blu-ray.