Posted in: Disc Reviews by Brent Lorentson on March 13th, 2014 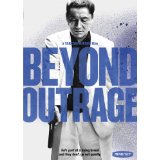 Takeshi Kitano is to yakuza films as Robert DeNiro is to American gangster films.  Whether it is in front of or behind the camera, Beat (his stage name) Takeshi has had a long, fruitful career, with many of his successful films like Sonatine. Fireworks, Brother and Outrage delving into the Japanese criminal underworld.  His talents don’t only fall between acting and directing; he’s also worked as editor and writer for many of his films.  He’s an artist whose films have found their way onto US shores, and for those that are fans of yakuza cinema, when a new film by Beat Takeshi comes along, it’s something you simply have to check out.

Beyond Outrage is a follow up to the 2010 release Outrage (this being the only sequel Takeshi has directed).  It’s five years following the events that occurred in the previous film, and the yakuza underworld is in the midst of a struggle over not just what clan is in control, but who is in power within the clans.  Ishihara (Ryo Kase) is the second in command of the Sanno clan; he’s young and power-hungry and believes the clan should be moving in a more modern direction.  Unfortunately the senior members of the clan are more traditional and feel the new direction things are going is not to their benefit.

It’s Detective Kataoka (Fumiyo Kohinata) who seems to have the more dubious plans; is he a dirty cop, or does he simply hate the yakuza?  It’s hard to decide where his loyalties rest as he seems to want to play one clan member against the other and throws everything into an uproar when he meets with Kimura (Hideo Nakano) about having a truce with his former enemy Otomo (Kitano).  But this isn’t just a simple truce; after all, the last time Otomo and Kimura faced each other, Otomo was stabbed and Kimura came away from the confrontation with a gash across the face.  The truce, though, is to push the two into uniting and taking down the Sanno clan.

If it sounds like things get complicated, well, they do, and the front portion of the film is very heavy in exposition and dialog between clan members and Detective Kataoka going from one leader to the next stirring the pot with his partner Shigeta (Yutaka Matsushige) who towers over everyone in the film.

Once Otomo is released from prison, he simply wants to live a normal life, but once news spreads about his release a hit is put out on him.  Kimura sends over two of his foot-soldiers to look after Otomo, but he resists the protection until he is cornered in an elevator and attacked.  Kimura and Otomo understand they can’t take on the Sanno clan on their own, so they go to another yakuza group requesting their help in going to war. From this point on the film finally picks up the pace and just becomes a slew of scenes filled with explosions of violence.

For those who dig yakuza films, do I really have to convince you to check this one out?  I highly doubt it.  My problem isn’t with the film, it’s just that I had never seen the first Outrage film, and I’m pretty sure if I had seen it, getting into the plot of the film would have been an easier transition.  That being said, I’m surprised that I was able to watch this film and not feel like I was missing too much of the story.  In my eyes that’s what makes a successful sequel, something that adds to the story previously laid out but accessible to any new viewers.  What I like even more is that with the way the film ends it sets itself up nicely for another sequel, which for all those involved as well as fans is a very good thing.

On the technical side of things, though the front portion does seem to drag, the performances are top-notch by all those involved.  What really helps give the film its punch is that when characters are killed the scenes are usually set up in a way where we don’t see what’s coming or may not even see the violence occur but instead only hear the gun shots or see the bloody aftermath.  What I liked most about this approach is that as the intensity of the film ramps up, every character is at risk, and I felt at any moment the conversation on screen could explode in hail of gunfire.  Heck, there is a heated exchange that escalates to the point where a character bites his own finger off!  I dig this movie; it may not be groundbreaking or all too original, but it’s a fun flick, and to me that’s what counts.

Beyond Outrage is presented in the aspect ratio 2.40:1.  The 1080p image is arrived at with an AVC MPEG-4 codec at an average of 18 mbps.  This is a very drab and saturated film.  The color palette has very little bright flashy color with the exception of a sweet-looking tattoo on the back of a half-naked woman.  This is a film where the detail that stood out was in the lines of the characters’ faces, the senior clan members; their age lines are deep and noticeable, and I want to say this was intentional considering this was about old school yakuza resisting the new ways.  The black levels are clear and the separation is distinct.  This isn’t a film trying to go for style over substance, and its raw, saturated look fits well for this gritty tale of revenge.

The DTS-HD Master Audio 5.1 Japanese audio track is the only option you get.  With subtitles, following the front portion of the film may get a bit complicated at first, but it doesn’t take much to get the gist of what’s going on.  When it comes to the violence and gun-play, that is where the 5.1 audio comes into play.  There is no booming score or sound cues in the film that stand out.  The audio gets the job done, but it could have been a much more robust track.

Outrage “Further” Beyond: (1:02) This is a great bonus feature.  Here we get a 62-minute feature that follows the filming of the project and has plenty of interviews with the cast and crew as they throw in their anecdotes about the production.  What’s most surprising is seeing how small the crew is.  When you watch the production diaries for big-budget films, you see how there are just hordes of people on set, but here we see a small tight-knit crew.  Sure, during the interviews with the cast everyone seems to be kissing up to the director, but with this cast it seems genuine, and it is clear that all involved have a deep rooted respect for Takeshi Kitano.

This is one I did have a good time with, but I feel had I seen the first Outrage film I could have enjoyed this even more.  This is a fun yakuza film, but it does fall short in some areas.  Overall, though, this makes for a fun addition for those having a Japanese gangster movie night.

Brent Lorentson is a horror writer and film critic based out of Tampa, Florida. With a BA in Digital Film, he co-wrote and co-directed Scavenger Hunt. His short stories have appeared in various horror anthologies. In 2019 his short script Fertile Blood will be a part of the anthology horror film Slumber Party. He is currently working on his first novel A Dark and Secret Place set to be released in late 2019. Favorite Films: Taxi Driver, Fight Club, I Saw the Devil, The Wild Bunch, Dawn of the Dead, A Clockwork Orange, Pulp Fiction, Heathers, The Monster Squad, and High Fidelity.
Black Angel 300 Spartans (Blu-ray)