The Wolf of Wall Street (Blu-ray) 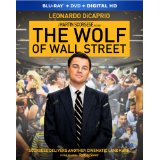 You might say this is overly familiar ground for Scorsese, but why should Robert DeNiro be the only one allowed to revisit a classic Scorsese film this past Christmas? (Heck, Wolf even has a randomly lavish set piece that vaguely reminded me of the watery finale in his Cape Fear remake.) You’d also be missing the fact that Scorsese hasn’t worked with this much unrestrained verve in a long time. Most of The Wolf of Wall Street plays out like the kind of gonzo films Oliver Stone made after the relatively straightforward Wall Street. (The slimy buffoons in this movie will make you want to run and hand all your money to an upstanding guy like Gordon Gekko.) The highlight is a mind-bending sequence when Jordan takes a potent Quaalude and enters a “cerebral palsy” phase. Scorsese and his legendary editor Thelma Schoonmaker allow this sequence — and several others in the film — to go on for a luxuriously extended period of time. (Remember…more, More, MORE!) Although it’s not nearly as noticeable as it is in the exquisite work David O. Russell did with the 1970s in American Hustle, Scorsese expertly captures the antic, hedonistic vibe (as well as the big suits and occasionally garish ties) of Wolf’s late ‘80s/’90s setting.

Although they tend to run a bit long, some of the best scenes in Wolf are two-person acting duets that feature DiCaprio partnering with Hill (who continues to be a revelation as comedic actor with a dramatic edge), Kyle Chandler’s ultra-principled FBI agent (canny casting after Chandler played the ultra-principled football coach on Friday Night Lights) or Margot Robbie (in a head-turning performance) as Jordan’s second wife. (Jordan is a lousy husband, but the film establishes that neither of his wives are what you’d call pushovers.) Scorsese also sprinkles in actor/directors like Rob Reiner (funny as Jordan’s hot-head dad), Jon Favreau (underused as Jordan’s lawyer) and Spike Jonze (thoroughly amusing as an early admirer of Jordan’s) into the cast, which isn’t surprising since Marty himself occasionally hops in front of the camera.

The Wolf of Wall Street is presented in its original aspect ratio of 2.40:1. The 1080p image is arrived at with an AVC MPEG-4 codec at an average of 25 mbps. This film offers a trickier visual challenge than you might expect. For instance, the movie takes place in the relatively recent past, but it’s not as obviously a period piece as something like American Hustle or even Scorsese’s own Goodfellas. Also — as insane as the in-office parties get, and as luxurious as Jordan’s life is — a good chunk of the film still takes place in a comparatively muted office environment. (And even dingier surroundings when Jordan and his crew are starting out.)

The HD image is pretty spotless throughout, which serves to heighten some of the film’s subtle visual flourishes. (Jordan’s blue suit, for example, stands out a little more among the sea of business attire when he’s addressing his rowdy troops.) The image also neatly switches aspect ratios a few times, usually to replicate the full-screen format of Jordan/Stratton Oakmont’s commercials. Black levels are deep and impressive, particularly during the harrowing boat trip. (Conversely, Donnie’s white teeth are appropriately resplendent.) Close-ups offer a terrific amount of detail, whether we’re looking at a ragged, hungover face or the fabric of a $2,000 suit. The Wolf of Wall Street isn’t exactly anyone’s idea of a visual spectacle, but this Blu-ray does a great job of displaying why Jordan’s opulent lifestyle was so intoxicating.

The DTS-HD Master Audio 5.1 track is not quite as aggressive as you might expect from the movie that entered the profanity record books for its coarse language. Don’t get me wrong: the ambient, angry chatter can be heard pouring out of the surround speakers during any office sequence; it’s just more understated than I expected. Nevertheless, this is a very well-balanced track where the dialogue and songs (from the likes of Bo Diddley, Billy Joel, and Cypress Hill) co-exist easily, even when they’re both exploding. The track also swells nicely during any big office scene — especially if it features McConaughey’s chest-thumping “Money Chant” — and makes its biggest splash during the disastrous boat trip. Overall, the audio presentation isn’t as immersive or detailed as I hoped, but it’s still a strong, powerful effort.

The Wolf Pack: (17:01) This behind-the-scenes doc, presented in HD, is sadly the only special feature on this disc. At least it’s a decent one. The format for this featurette is straightforward — cast and crew saying complimentary things about one another — but some of the comments are more insightful than the usual platitudes. For example, Scorsese talks about how important it was to make Jordan’s lifestyle seem like a ton of fun because, well, Jordan and his guys had a ton of fun! (It’s not clear when this featurette was filmed, so I can’t say whether this was a response to critics who said the film glamorized and endorsed this lifestyle.)

The actors talk about their freedom to improvise; I figured a lot of the material between DiCaprio and Hill was off the cuff, but I liked learning the great scene between DiCaprio and Chandler on Jordan’s yacht also featured some improv. Meanwhile, DiCaprio — who has now worked with Scorsese five times — says this is the most fun he’s ever seen the director have.

Obviously, I think this polarizing film is fantastic. In fact, I believe The Wolf of Wall Street will become even more highly-regarded in a few years, when there’s more distance between the film and the “controversy” its shock factor inspired.

The home video release, on the other hand, is a case of good news and (really) bad news. The good news is the film looks and sounds great on Blu-ray. The bad news is the bonus material is distressingly meager. You’re telling me there’s a four-hour cut of this movie out there, and we can’t even get a single frame of additional footage on this disc? (Deleted/extended scenes?) I’d suggest the studio is holding out for a future director’s cut/double dip, but — as I mentioned before — that mythical extended version of Gangs of New York doesn’t seem like it’s ever going to happen. So I wouldn’t hold my breath for a longer Wolf.

Even though I actually like the one featurette that’s included here, I have to slightly downgrade this release’s overall score for not giving us anything more. (Think how much fun and gloriously profane a gag reel would’ve been.) If you’re a fan of the film, pick this Blu-ray up because you enjoy the movie, not because you’re expecting any behind-the-scenes goodies. If you haven’t seen it — and you’re not easily offended — I highly recommend it.