Death Do Us Part 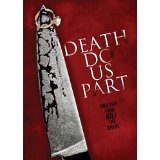 “Bad things happen in the woods, especially to pretty girls like you.”

Stop me if you’ve heard this one before: a smallish group of friends head to a remote location for what they think will be a sex-and-booze-fueled romp. Instead, they find themselves getting picked off by a mysterious killer. If you’ve ever seen a slasher movie, you’re painfully familiar with this scenario. Thankfully, it seems like the people who made the low-budget Death Do Us Part are also well-acquainted with the way this sort of movie is supposed to work. And they’ve decided to have some fun with it.

Ryan (Peter Benson) and Kennedy (Julia Benson) are about to get married. Before that, Ryan’s obnoxious buddy Chet (Kyle Cassie) whisks them and a few others away for a joint bachelor/bachelorette party at a cabin he found on Craigslist. (I mean, what could possibly go wrong?) The three other people along for the ride are Kennedy’s acerbic sister Hannah (Christine Chatelain), Ryan’s shady cousin Derek (Benjamin Ayres), and Kennedy’s best friend Em (Emilie Ullerup). Once they arrive, they encounter the cabin’s creepy owner, Bo (Dave Collette), who is doing everything short of wearing a T-shirt that says “I Am An Axe Murderer.”

Then again, there is no shortage of suspects once the killing starts. For example, it quickly becomes clear that uptight rich girl Kennedy grates on some people’s nerves. Ryan and Derek can also be seen huddling in corners and whispering about some dark secret they share. And did I mention two people in the group are secretly hooking up? Meanwhile, one character seems unhealthily attached to the bride, while another is on medication to deal with some sort of mental problem.

The film actually opens with a woman in a bloody wedding dress wandering through the forest and being picked up by a deputy. The fact that we never see the woman’s face is emblematic of how the rest of the story plays out; the movie doesn’t completely telegraph what happens, but you can probably figure it out anyway.

I do wish Death Do Us Part had gotten to the Death part a little faster. I appreciate the effort put into building mystery and establishing the characters. Unfortunately, some scenes — like the opening car ride to the cabin — tend to drag because the writing and acting are considerably less sharp than the tool used to cut off a character’s fingers later on. (There’s also *way* too much time and energy spent framing a certain character as the killer early on.) The movie clocks in at 89 minutes, but the first kill comes at about the 50-minute mark. That means the film’s final portion feels rushed because it is disproportionately stuffed with stabbing and people foolishly running in separate directions when they’re attacked by a single person.

Despite some clumsy staging for the majority of kills, director Nicholas Humphries — in his feature film debut — shows some promise. The final showdown(s) is surprisingly brutal, and I think the rest of the movie could’ve used a bit more of that nastiness. Instead, the tone alternates between menacing and goofy, though I was pleased to find some of the goofiness had wit behind it. My favorite example is one character suggesting the group wait until morning to try and escape the cabin by foot, and another pointing out that their killer could just as easily murder them in the day time.

The cast is ok and keeps any potentially painful line readings to a minimum. Cassie may come off as a poor man’s Johnny Knoxville as Chet, but he manages to give the insufferable booze clown a little depth. The rest play their types well enough, whether it’s sweet (Ullerup) or sour (Chatelain). I don’t think it’s unreasonable to expect a level of T&A in a low-budget horror flick — especially with a couple of well-endowed cast members — but this film is pretty tame on that front. It could be because married stars Peter and Julia Benson are also the movie’s co-writers, co-producers, and (presumably) calling all the shots. So the most we get is a comical striptease from Chet.

I wouldn’t exactly call Death Do Us Part a horror/comedy. The humor in the film is self-aware, but stops short of camp or parody. (Bo popping up out of nowhere repeatedly to spook the group comes the closest.) And it’s not even close to being a full-on, satirical deconstruction about the perils of hanging out at a cabin in the woods. Death Do Us Part is simply a low-budget slasher flick that is equal parts limited and watchable.

If you’re the kind of person who would actively seek out a cheapie horror movie called Death Do Us Part in the first place, you’re in luck; this film seems to have been made by people just like you.