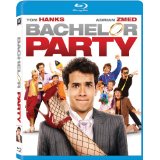 “A week from this Saturday, I turn in my amateur standing and go pro.”

Tom Hanks has been starring in movies for exactly 30 years. He burst onto the big screen with 1984’s Splash, the romantic-comedy hit that also marked the start of a fruitful creative relationship with Ron Howard. A few months later, Hanks headlined Bachelor Party, which probably just seemed like the latest in a long line of silly, raunchy, sex comedies that were extremely popular at the box office. Of course, that was before anyone could possibly realize the movie would eventually serve as the spiritual godfather to comedic blockbusters like Wedding Crashers and The Hangover.

“Hi, come in! Drugs to the right, hookers to the left.”

I mean, the title of this film pretty much says it all, so I don’t have to do the synopsis thing, right? All you need to know is Hanks stars as Rick Gassko, a ne’er-do-well bus driver who could charitably be described as “impish”. His well-to-do future father-in-law (George Grizzard), on the other hand, considers him an “immature a—hole.” Before he can marry his sweetheart Debbie (Tawny Kitaen), Rick’s buddies vow to throw him the bachelor party to end all bachelor parties. Cue the prostitutes, strippers, an Indian pimp (!), and a drug-sniffing donkey(!!)

Bachelor Party rises above the fratty comedy fray for two reasons. Director Neal Israel — who co-wrote Police Academy — fully delivers on both the premise and promise of the title. Wedding Crashers, as uproarious as it often is, subtly morphs into a romantic comedy when Vince Vaughn and Owen Wilson’s characters begin pursuing their respective love interests. On the other hand, once Bachelor Party‘s titular bash kicks off, the movie never stops giving its audience a raucous good time.

Beyond simply throwing a gaggle of half-naked bodies on-screen — along with a very memorably naked Monique Gabrielle as Rick’s dream girl ex — Israel comes up with some truly-inspired sight gags involving Rick’s version of a potato salad and a suicidal buddy trying to slit his wrist with an electric razor. The best of the bunch is the climactic fight between Rick and preppy rival Cole (Robert Prescott) in front of a movie theater showing a 3D film.

The Party doesn’t officially start until about an hour into the film, but there’s enough to keep the audience occupied, including some funny false starts and the endearing relationship between Rick and Debbie. Sure, Debbie still worries that Rick might give in to temptation during his wild bachelor party, but it’s always refreshing to see a female lead in a dude-centric movie who isn’t a total wet blanket. (Let’s just say the women don’t take the guys’ shenanigans lying down.)

The other reason Bachelor Party works is because Tom Hanks is great in it. Years later, he would earn a reputation for being the nicest superstar in Hollywood, but Hanks has always been really good at playing smart-asses. As Rick, Hanks has a razor sharp wit, but he also gives you the impression his character only needles people who deserve to get needled. (Primarily Cole and Debbie’s dad.) Not surprisingly, his innate decency also comes through; Rick is definitely a scoundrel, but Hanks makes you believe there’s a great guy buried in there too. I’m not saying anyone who saw this performance could predict the former Bosom Buddies star would go on to win two Oscars, but you could definitely tell he was going to be a movie star.

Among the rest of Rick’s crew, former T.J. Hooker star Adrian Zmed stands out as Rick’s best friend, but the rest of his crew is a crude blur of hootin’ and hollerin’ clowns. (With the notable exception of suicidal buddy Brad.)

A lot of comedies don’t age particularly well, and Bachelor Party turns 30 this year. That’s downright geriatric for a sex comedy that is very much a product of the 1980s. (This movie is so ’80s: Rick does battle with a preppy blond nemesis , and the movie co-stars Tawny Kitaen a few years before she invented the profession of “car acrobat.”) There’s a fair number of gags in Bachelor Party that fall flat. (To me, the Indian pimp felt totally forced.) Thankfully, the movie has so many jokes that there are plenty of laugh-out-loud moments to make up for it. Even with all the successful imitators it begat, Bachelor Party manages to feel fresh and funny.

Bachelor Party is presented in an aspect ratio of 1.85:1. The 1080p image is arrived at with an AVC MPEG-4 codec at an average of 38 mbps. The occasionally noisy medium shot notwithstanding, this is a surprisingly sharp and vivid image. Colors are bright and vibrant without going overboard, which is always a threat with some of those ’80s neon fashion choices. More importantly, there are no blemishes to speak of. While not perfect, this is a very strong HD upgrade that retains the original look of the film.

The DTS-HD Master Audio 1.0 mono track is also a product of its time. Despite its limitations, however, the track offers a pleasantly full sound once the party gets going. The track feels especially muscular whenever it cranks out one of the film’s songs. (The soundtrack includes offerings from Oingo Boingo, Angel and The Reruns, The Fleshtones, and more.) Fidelity is very strong throughout, while the dialogue is intelligible and only occasionally feels a bit hollow. Again, that very slight defect feels authentic to the film’s original production; more importantly, the track doesn’t feature any overt problems like hissing or popping.

All of the bonus material is presented in standard definition. In fact, the footage looks so horribly dated, I’m halfway convinced it was done intentionally to make the HD upgrade look even more impressive than it already is.

Behind the Scenes: (3:10) The beginning plays like a glorified trailer, but there are eventually comments from the cast and filmmakers.

An American Tradition: (2:51) At the time this film came out, the idea of putting a bachelor party on film was novel. (The male-only ritual was somewhat shrouded in mystery.) More importantly, we learn the wild bachelor party in the film was inspired by a real-life bachelor party thrown for Bob Israel, a producer on the film and the director’s brother. (Yikes!)

While the Men Play: (1:43) A featurette that briefly examines the way the women in the film get in on the raunch. Features comments from Kitaen and director Neal Israel.

Tom Hanks Interviews: (2:44) For some reason, less than three minutes’ worth of material is broken down into three featurettes — “From Television to Movies”, “Tom Hanks Goes to a Bachelor Party”, and “Hanks on Television” — that all say the same thing: Tom Hanks was bored to death doing television and ready to make movies. It’s a shame it didn’t work out for him. Features a Play All option.

The re-hashed bonus material is a bit of a letdown, but this fine-looking Blu-ray is still absolutely worth picking up, even if you already own the DVD. Bachelor Party remains as goofy and tasteless as ever. Fortunately, it’s also extremely funny.