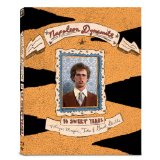 Anyone who is a parent of a teenage boy is very familiar with the film Napoleon Dynamite. Released in theaters in 2004, this film rapidly developed a cult following and continues to be popular among the high school and middle school crowd. Napoleon Dynamite is a very charming and witty film about a tall and lanky teenage nerd (played by Jon Herder) who lives with his older brother and grandmother in Preston, Idaho. His brother Kip (Aaron Ruell) is 32 and unemployed and how spends most of the day at home on the internet on chat rooms trolling for women. Napoleon, on the other hand, is a bit more industrious, as he at least does attend high school. However, he spends most of his time daydreaming. When he is not daydreaming, he is being bullied at school.

To say that Napoleon is quirky would be an understatement. He has a very deadpan and monotone delivery except when he is asked a question, which more often than not results in a loud, short and abrupt answer which is a trait my kids seem to have adopted! Napoleon also has a very tough time being able to communicate with the other kids in the school, being somewhat of an outcast. However, he meets two students who share some of the same personality quirks as he does, Pedro and Deb, and decides to try to help Pedro, a recent immigrant from Mexico, in his bid to get elected as class president. (Remember those Vote for Pedro t-shirts?)

Along the way we are introduced to his brother Kip and his internet girlfriend who travels all the way from Detroit to meet him, as well as his lecherous Uncle Rico, a Tupperware salesmen who is constantly on the prowl. Quite frankly, I can’t think of another film character anything like Napoleon Dynamite, who is without a doubt quite an original. While appearing to be quite gruff at first, we come to see Napoleon as a charming and thoughtful kid trying to blend in and make his way through life despite his quirks. Even though this film has a lot of adolescent humor, it is very funny and engaging and well worth a look.

Napoleon Dynamite is encoded with AVC and is presented on a 50GB disc at its original aspect ratio of 1:85:1. While the look of the film on Blu-ray is clearly superior to its presentation on DVD, the difference is not as much as I had expected. The film looks pretty much the way it does on DVD with a rather muted but accurate color palette with very mediocre black levels which rob the film of much in the way of depth and dimensionality. This is also a film with a lot of grain that some may find distracting. I have no problem with it, as it is clearly the result of how the film was shot and is present in the original. I am not one who is in favor of using digital noise reduction to clear or scrub grain from the final product. Grain is inherent in film and should be preserved as accurately as possible. Detail while clearly better than the DVD is far from the level that I have seen with most of the more recent Blu-Ray releases. The best way I can describe the look of the film is drab, flat and grainy.

Napoleon Dynamite comes equipped with a lossless track encoded with DTS HD Master Audio which sounds much better than I expected. While not a splashy mix, the audio here has good fidelity and lacks the harshness present in the old mix. The overall sound of the film is rather smooth and open with decent transparency and imaging with good bass response but without the depth and spaciousness of the better sounding encodes. The surrounds were used at times to fairly effectively create a nice immersive sound mix in several scenes but well short of the sense of total immersion that one experiences in the very best sound mixes.  This sense of immersion was also sporadic throughout the film. While the overall bass response was good, I felt it to be a tad on the bloated or flabby side, lacking the depth and solidity of the better sounding tracks, sounding more like bad 70’s disco, which I guess is rather appropriate given the hilarious dance sequence at the end of the film. I really didn’t expect great audio when I popped the film into the player for a spin due to the low-budget nature of the film. While this release doesn’t deliver a great sound mix, it nonetheless exceeded my expectations, as modest as they might have been. I guess there is something to be said for that.

There is really little to thrill you with the extras included with this release, none of which are in HD. The extras include the standard audio commentaries from the director and cast as well as outtakes and deleted scenes. Also included are the typical behind the scenes look at the making of the film, a World Premiere – Jared Hess Documentary, Napoleon Sightings and a still gallery. By far the most interesting of the extras is the short film Peluca which the director Jared Hess made in film school also starring Jon Heder which forms the basis for this film. The short was also shot in Preston High School in Idaho and contains the same Napoleon Dynamite character reprised by John Hader in this film. I found it rather interesting to see how the character and plot of the short were improved upon and fleshed out in the feature while maintaining the charm and simplicity of the original.

The disc comes in a completely useless cardboard sleeve that is hard to put back together.

While Napoleon Dynamite is an original, charming, engaging and funny film, I did not find this Blu-ray release to be enough of an improvement over the DVD to warrant a purchase. However, I would recommend that you at least check it out as a rental, especially those of you out there who are unfamiliar with the film.

This review was written by Joe Whip and Gino Sassani