Revenge of the Nerds (Blu-ray) 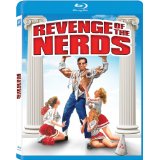 Revenge of the Nerds is an 80’s cult classic making its way to Blu-ray. Basically you get a standard catalog release and a handful of features thrown at you. I remember seeing this movie about ten years back. I found it amusing then, so I was looking forward to being able to watch it again; maybe this time I’d get more of the jokes.

The movie takes place where two nerds played by Robert Carradine and Anthony Edwards are off to attend the fictional Adams College. They have both enrolled in the acclaimed computer studies department. The two dress like typical nerds with tucked-in shirts, thick black-rimmed glasses, buck teeth, and pens in their shirt pockets. This is of course noticed by some of the frat members the minute they set foot into the quad and are already labeled as nerds. The Alpha Beta frat house are the apparent bullies of the school and also happen to all be star players on the football team, coached by the arrogant John Goodman. While partying the group accidentally burn down their frat house and take over the freshman dorm, forcing them all to sleep in the gymnasium. Of course while some of the freshman are recruited for frats and sororities a group of them are left out, the nerds. Sick of living in the gym they set out to find a house, which they turn, into a frat house, Lambda Lambda Lambda. Gaining some respect around the school the jocks of Alpha Beta set out to make their lives hell, while the nerds get a little revenge for themselves.

The movie has very few golden humor moments, and even at times gets a little annoying. I think the ending is predictable and over the top as well, overall making for a pretty weak movie. I’m pretty sick of these underdog tales with predictable endings. Not to say it was a complete waste of time, because there was a humorous part or two, but really this movie is just another example of a typical 80’s movie that can’t hold up nowadays.

Revenge Of The Nerds is presented in its original aspect ratio of 1.85:1. The 1080p image is arrived at with an AVC MPEG-4 codec at an average 35 mbps. The transfer is lackluster to say the least. Many scenes are marred with incredible softness and grain. The colors were also disappointing, looking dark and much too washed out to really impress. I realize the movie is over twenty years old, but fans will no doubt be somewhat disappointed to see such a weak transfer.

The DTS-HD mono is quite mundane. Dialog sounds somewhat muffled a good portion of the time; surely this has to do with the weak source material. The films music sounds a lot better and comes out surprisingly clear; still this isn’t enough to save the audio track from being disappointing.

Audio Commentary There is a Commentary by director Jeff Kanew and actors Robert Carradine, Timothy Busfield, and Curtis Armstrong. Provides some insight into the movie; very informative.

Television Pilot: (24:16)  A television pilot that has a very weak story line; something you would think would be a good feature really turns out to be a waste of time.

Deleted Scenes: (8:48) Some additional scenes, which go with the flow of the movie, so I really found them to be uninteresting, just like their counterparts that made it past the cutting room floor.

This is pretty much the DVD release with all of the same extras. The high-definition transfer isn’t going to turn any heads. It’s priced right for the fan who wants to stay up to date.