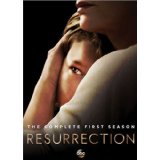 “Maybe you’re missing the real question: do you want to believe?”

Talk about a loaded question. If you apply it to the plot of Resurrection, it obviously refers to the formerly-deceased residents of Arcadia, Missouri who suddenly and inexplicably return home many years after their respective deaths. But I think the question also applies to the attitude modern TV viewers have toward any new network series. Before they decide to invest their time, those viewers “want to believe”…that an intriguing drama like Resurrection won’t get canceled after five episodes.

ABC has been particularly shrewd in capitalizing on this change in attitude. The network has routinely premiered some of its promising, under-the-radar series late in the traditional TV calendar. The result is a debut season that’s long enough to titillate viewers, but short enough to not scare away any commitment-phobic viewers. ABC’s most famous successes using this strategy are probably Grey’s Anatomy (nine episodes in season 1) and Scandal (seven episodes), which premiered to relatively little fanfare before earning longer episode orders for subsequent seasons. I don’t know that Resurrection (eight episodes) will have the staying power of Grey’s or if it’ll generate half the buzz that Scandal does. But I do believe this fantasy drama series was even better suited for an initial limited run.

Resurrection is based on “The Returned,” a 2013 novel by Jason Mott. That means it’s not based on Les Revenants, a French supernatural TV drama whose title translates to…“The Returned.” (Confused yet? Good!)

The series opens with a boy waking up in the middle of a field near a Chinese village. The boy has no memory of how he got there, but the red sweatshirt he is wearing indicates he’s from Missouri. Eventually we learn his name is Jacob Langston (Landon Gimenez), and he is placed under the care of Immigration & Customs Enforcement agent/disgraced cop J. Martin “Marty” Bellamy (Omar Epps). Jacob indicates to Marty that he is from a town called Arcadia. When Marty attempts to drop the boy off at home, he gets quite a shock: Jacob Langston died 32 years earlier at age 8.

Frank and Lucille Langston (Kurtwood Smith and Frances Fisher) have different reactions to the return of their son, who looks exactly how they last saw him. Lucille is unabashedly overjoyed to have Jacob back, while Frank is more skeptical. Frank’s brother Fred (Matt Craven) is the sheriff of Arcadia, and his wife Barbara allegedly died trying to save the boy from drowning. Jacob’s memories of his own death call into question what really happened that day, which disturbs Frank and his adult daughter/town doctor Maggie (Devin Kelley). By the end of the pilot, it becomes clear Jacob isn’t the only dearly departed member of the Arcadia community who is going to be making a surprise re-appearance.

Resurrection was developed for television by writer/producer Aaron Zelman, who previously worked on dark dramas like Damages, The Killing and Criminal Minds. As a result, this show’s quaint small-town setting and fantastical tone represent a significant departure. Still, this first season was most effective whenever it adopted a slightly sinister tone. The best example is Ep. 2/“Unearth,” where we get confirmation that another Returned named Caleb Richards (Sam Hazeldine) is up to no good.

It quickly becomes evident that not all of the Returned are created reanimated equally, which does help deepen the show’s central mystery. (In other words, this doesn’t appear to be a pod people situation.) Given the show’s title, it’s not surprising to learn there’s a pretty significant spiritual element to the drama. That element is largely personified by Tom Hale (Mark Hildreth), the town pastor who was also Jacob’s best friend from childhood. (Tom preaches about miracles in church, but can hardly force himself to believe the one that just walked back into town.)

Or, you know, it could be aliens after all.

Either way, there are a lot of interesting ideas at play here. I imagine the prospect of being reunited with a departed loved one appeals to almost everyone. Unfortunately, the show mostly falls flat in the way it explores those ideas and unravels its mystery.

The most obvious issue is the performances, led by Epps. The House actor brings the weary skepticism from his former TV gig, but very little of the charisma he displayed years ago in movies like Love & Basketball. He’s not called upon to carry the show, but Marty’s outsider status in Arcadia makes him the de-facto audience surrogate. Unfortunately, nothing about the character or the performance pops, whether it’s Marty’s forced flirtation with Maggie (any scene with Epps and Kelley should be declared a chemistry-free zone) or his troubled backstory. To be fair, the last scene of the season does strongly hint that Marty may have a connection to the overarching saga.

Smith and Fisher make for a fine, conflicted couple — Smith, especially, finds interesting nooks in his character’s motivations — but too often wind up playing the same beats. On the other hand, I did like that Gimenez didn’t adhere to the creepy kid handbook to play Jacob; instead, the actor simply plays him as the scared, confused kid he is. Craven is impressively (and understandably) jerky as Sheriff Fred, while Hazeldine provides some much-needed menace. (Not surprisingly, much of the show’s dramatic impact vanishes along with Caleb at a key moment.) There’s a fair amount of time devoted to the Richards family drama in the middle of the season; I liked that Caleb’s adult daughter Elaine (Samaire Armstrong) was so happy to have her dad back that she was willing to overlook blinking red warning signs. But the Richards’ storyline mostly peters out in favor of trite small-town drama.

After a murder in Arcadia, the residents are split on how to handle the Returned. Although the townsfolk stop just short of grabbing actual pitchforks, this is the sort of small-town/religious hysteria we’ve seen done much better in practically every Stephen King novel. (And more recently in CBS’s adaptation of Under the Dome, which has the delightful advantage of being an insane show.)

Resurrection: The Complete First Season includes all eight season 1 episodes on two discs. Special features include deleted scenes, bloopers, and two featurettes: “On Location in Georgia” and “Resurrection: Building a Mystery.” On the latter featurette, cast members share their theories as to what’s going on in the show. There are only eight episodes in this first season of Resurrection, and most of the time is dedicated to *how* the Returned managed to come back from the dead.  I think that would’ve been a better strategy if these eight episodes represented a close-ended miniseries that wrapped up the story completely.

Thankfully, the show moves at a brisk pace. And the action-packed finale did leave me curious as to what would happen when Resurrection returns for its 13-episode second season this fall. In other words, “more are coming…more than you could ever imagine.”