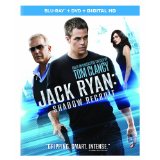 Witness the birth of — actually make that rebirth of –one of the most popular action heroes in literature. Tom Clancy’s Jack Ryan has been a character of many jobs and many faces over the years. Baldwin, Ford, and Affleck have all stepped into the role of the man who has been a soldier, an analyst, an operative, and a president. Now Chris Pine looks to fill the shoes left behind by some of Hollywood’s heaviest hitters and try his hand at a retelling of the legendary character which also stars Kevin Costner and Keira Knightley, along with Kenneth Branagh who doubles as the film’s director. There are two clear differences between Pine’s circumstance and the others who have played Ryan: the story has been modernized to fit today’s setting, and Pine’s story is the only one not to be based on a popular Clancy novel.

Tuesday, September 11, 2001, Jack Ryan (Chris Pine) is a doctoral student at the London School of Economics. On his way to class, he notices a commotion in the school lobby and pushes his way through the crowd to a television set alerting him for the first time of the tragic events that have just occurred back home. Fast-forward 18 months; Ryan has left school and is now a lieutenant in the United States Marine Corps. During a transport, his helicopter is struck down and despite an injury that would have incapacitated a lesser man, he manages to pull his men from the wreckage and save their lives.

Now recuperating from the injury sustained in the attack, two significant things happen in Ryan’s life: Firstly, he meets someone, a doctor named Cathy (Keira Knightley) who helps him to get back on his feet. Lastly, he is approached by William Harper (Kevin Costner), the head of a clandestine unit within the Central Intelligence Agency. Knowing that his service in the military is over, Harper presents Ryan with a new opportunity to help protect his country from the next great attack. He recruits him as an analyst, sifting through Intel and using his keen Intel to predict the next threat.

It takes some time, but that threat presents itself in the form of a shadowy Russian businessman (Kenneth Branagh) looking to capitalize on the economic crisis caused by an international attack. Able to predict the attack with time to thwart it and the only one capable of possibly preventing it, Ryan is immediately promoted to field agent and thrown into the world of espionage where he will have stop what’s happening, all while trying to maintain his crumbling relationship with Cathy.

This was a film that I had been looking forward to since last year, so you can imagine my heartbreak at the announcement that the film’s release would be delayed to the following year. However, I digress. The film was an overall success in my eyes; however, there were some things that I had issue with, the most significant being the uneven portrayal of the antagonist; Branagh has a remotely intriguing introduction scene, and he does at one point display an intellect on par with our protagonist, managing to outwit him at one turn, but towards the film’s midway point, the character loses steam and practically becomes a secondary character by the film’s end. It was just a little disappointing; we get a window into the character who possess a unshaking resolve to the mission, making it clear that he is not simply a character motivated by financial gain, but then he takes a back seat; just a little too inconsistent with what we had been shown up to that point.

On the positive side, I do believe that Pine made a fine Jack Ryan, especially for an origin story. The creators made a right choice making this a reboot rather than a continuation; saves them from the headache of possibly stepping on the toes of anyone who brought the character to life beforehand. Pine is great as a man out of his depth and struggling to keep his head above water, all while clearly capable of the job he has been entrusted with; best display of this being when he is putting all the pieces together to the impending attack.

Jack Ryan: Shadow Recruit is presented in its original aspect ratio of 2.40:1. The 1080p image is arrived at with an AVC MPEG-4 codec at an average 30+ mbps. The high-definition image presentation takes advantage of this being one of the few movies filmed on actual 35mm film. There’s a depth to the image that is almost akin to 3D. It’s accomplished through texture and lighting and allows the viewer a true inside experience. Black levels are particularly fine, providing wonderful shadow definition during the night Moscow material. There’s something organic and alive about the image that I’m afraid we’re seeing less of all of the time.

The DTS-HD Master Audio 7.1 is quite immersive. The surrounds are aggressive when necessary and pulled back to an intimate closeness when called for. The subs really shine, at times filling your room with the thunder of helicopters that had me ducking the rotor blades. Dialog works well at all times. I wasn’t a fan of the rather repetitive theme, but the sound quality isn’t the reason. I just found it distracting. Perhaps it’s that the music of Hunt For Red October was so good.

There is an Audio Commentary with Kenneth Branagh and Lorenzo di Bonaventura. It’s all pretty straightforward, and the pair doesn’t stray too much into side stories or anecdotes of any kind.

Jack Ryan – The Smartest Guy In The Room: (13:37) I like that this feature along with the others brings into the conversation the previous versions of Ryan along with clips. Cast and crew offer their thoughts on the evolution of the Ryan character and how he was molded to a changing world.

Sir Kenneth Branagh – The Tsar Of Shadow Recruit: (9:49) Branagh was an interesting choice for this kind of action spy thriller, a good one as it turns out. His approach is the focus here with the usual love notes from cast and crew. Of course, Branagh himself checks in to offer his thoughts.

Old Enemies Return: (21:12) This feature looks at the return of the Russian bad guy in a post Cold War world. Professors of world affairs talk about American/Russian relations and how they’ve evolved and also how they’ve remained the same. There’s some nice history here and the perfect defense of using a Russian villain.

Deleted/Extended Scenes: (5:02) There’s no individual selection here, and you get the option of a commentary by the same pair as the film. Nothing special here at all.

Also beneficial to the story was the incorporation of the 9/11 attacks; in my opinion there could have been no better catalyst for the beginning of the story; it will make the film recognizable as well as offering a relatable circumstance for how the character ended up on the path he was on. Modernizing the story was a necessary tactic for the success of the film, because that decision is what going to bring in the younger element who perhaps aren’t familiar with Clancy’s most famous character.

Jeremy Butler is a film school graduate of the International Academy of Design and Technology. He is been writing for Upcomingdiscs since 2012; however, movies have played a big part of his life for much longer. Favorite genres include horror, science fiction/fantasy, and comedy. Favorite movies are V for Vendetta, Boondocks Saints, Kiss Kiss Bang Bang, and The Godfather.
Resurrection: The Complete First Season Contest: Win A Short History Of Decay On DVD From Arc Entertainment