Posted in: Disc Reviews by Brent Lorentson on June 24th, 2014 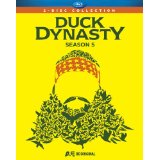 It’s that time of the year again to dust off the old hunting rifle and shake out the camouflage suits, because Duck Commander is back in action.  Duck Dynasty comes to Blu-ray on its fifth season, and though I was a little underwhelmed with the previous season, this new release brings the show back to the backwoods charm that gained my appreciation from the start.  Yes, I still have a hard time calling this a reality series, since just about every episode and sequence seems more scripted than most hour-long dramas, but the characters are so likeable and goofy that a lot can be forgiven.

The show gets off to a slow start with “Boomerang Becca” and “Willies Number Two”.  The first is about Willie and Korie’s adopted daughter Rebecca, who has come home after completing a fashion internship in Los Angeles.  Willie is just nervous her visit is going to evolve into her simply moving back home, and he doesn’t seem too OK with that.  As for the second episode, Willie decides he needs an assistant, and Korie asks Willie to give her cousin John David a chance.  Willie seems to warm up to having a guy very similar to himself working beneath him, but the Duck Commander crew doesn’t seem to appreciate the new guy giving them orders. These episodes just simply felt as though they were trying to introduce new characters into the show, but neither character worked, and I can’t say they were missed when they never returned for the rest of the season.

For me, what I watch the show for is Uncle Si and Jase.  These guys seem to be the ones who squeeze the most laughs out of me, but as the seasons progress Si seems to be less and less off-the-cuff than he was in the start, and now he’s just spouting random things to try to be funny.  Maybe he’s just trying too hard for the camera time, but I’m starting to feel we’re getting too much of Si; after all, there is such a thing as too much of a good thing.  But  with “Life of Si” where we get Si hooked up to a GoPro camera as he plans to make the ultimate movie about himself, well, this does have some funny moments.  But where Uncle Si seemed to shine the most is in “G.I. Si” where Willie and Jase have a paintball battle over a toy from their childhood, and Uncle Si goes mercenary during the paintball match.

This season we get to spend more time with the younger brother Jep, who despite the bearded look has a lot more yuppie in him than meets the eye.  Sure, this is why Willie and Jase pick on him more, but he does bring a more interesting element to the show without drifting away from what keeps it fun.  Whether it’s Jase needing help building a tree house or calling in Phil to help lay concrete, he’s the family member who appreciates that help is always only a phone call away.

But getting to the heart of the show, what makes this show work is how well this family seems to pull together for good times and bad.  Sure, people can hate on the show because people just have a problem with the Robertson’s and their beliefs, but what you can’t take from them is that they genuinely care for one another.  In the last episode of the season Jase’s daughter is about to go in for surgery, and the family rallies together to have a party in support of the little girl.  This was the episode that not only seemed to be the most genuine, but it actually seemed to capture what makes reality television so fascinating at times.  To glimpse into the lives of others while we can sit in the comfort of our homes as we watch the drama or silly antics unfold where we can connect or simply see things we can’t imagine happening with our families is the appeal of reality television.

Duck Dynasty Season 5 is presented in its original aspect ratio of 1.78:1.  The 1080p image is arrived at with an AVC MPEG-4 codec with an average of about 27 mbps.  For a reality show, the picture here looks really good.  Granted, many of the shots are preset, and I’m certain there is a fair amount of lighting at play to bring out some beautiful shots.  Throughout the show we are given numerous beautiful exteriors while the guys are out and about, though at times the image does seem a bit soft. For the most part, though, the images look sharp and not overly saturated.  The production teams seems to have gone a bit overboard with the slo-mo transition shots, but at least they are throwing in new footage instead of relying on stock clips.

The DTS-HD Master Audio 2.0 track is a bit underwhelming, but considering this is a reality show, expecting the bells and whistles and a robust sound design is asking a bit much.  What does come through, surprisingly enough, is the ambient noise of the swamp, which does add extra warmth to the scenes.  Surprisingly, the audio for an episode where Jase and Willie are trying to track down a dying smoke alarm sounds pretty good considering this is only a 2.0 track, but aside from this episode everything is relatively standard with the previous releases.

Featurettes: (16:37)  Well, this was a bit of a letdown.  Instead of real bonuses, what we get are a series of recaps of episodes through the season and some that have clips from previous seasons.  Really, this is just a wasted bonus.

2 deleted scenes: (6:57) We get cut clips and from the same episode, “Willies Number Two”.  The first is Willie being a bit cruel to a interviewee who happens to have red hair.  The second scene is a little more amusing, about an applicant that lists their name as Carlton Banks (a character from The Fresh Prince of Bel Air).  This at least was an amusing clip that most likely got cut for time but if left in would have helped the episode.

Season 5 is more of a return to form for the Duck Commander crew, and it had me laughing more times than it had me rolling my eyes.  Is it a nail-biting drama like True Detective?  No, it’s a reality show that tries to not take itself too seriously and continues to squeeze in a positive message for its audience.  This is one of the few shows that is fun for the whole family, and I hope the show continues to go on.

Brent Lorentson is a horror writer and film critic based out of Tampa, Florida. With a BA in Digital Film, he co-wrote and co-directed Scavenger Hunt. His short stories have appeared in various horror anthologies. In 2019 his short script Fertile Blood will be a part of the anthology horror film Slumber Party. He is currently working on his first novel A Dark and Secret Place set to be released in late 2019. Favorite Films: Taxi Driver, Fight Club, I Saw the Devil, The Wild Bunch, Dawn of the Dead, A Clockwork Orange, Pulp Fiction, Heathers, The Monster Squad, and High Fidelity.
Masters of Sex: Season One Joy Ride 3: Roadkill (Blu-ray)