Posted in: Disc Reviews by Brent Lorentson on July 14th, 2014 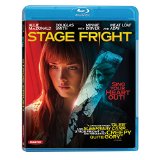 “Isn’t it wrong to sing and dance when someone has just died?”

When I first hear a film is going to attempt to be a horror musical, all I can do is simply shake my head at the thought of how bad this may be.  But that’s not to say that I couldn’t be very wrong.  Repo! The Genetic Opera was a rock opera that I had a blast with, and I’m not ashamed to admit I even purchased the soundtrack after the release.  Where my concern usually rests with the idea of horror musicals is that I’m worried it will turn out to be no better and possibly worse than The Rocky Horror Picture Show.  I’ve never liked the film, and it’s just something I’ll never be able to understand, how it’s gotten such a ravenous cult following, though I can appreciate that Rocky does have an audience, and week after week fans turn out in costume to sing along and in some locations even perform along with the film.  Stage Fright is a film that aims to attract that same audience that embraces Rocky, but goes a step further by delivering a solid slasher film as well.

The film opens during a performance on Broadway as Kylie Swanson (Minnie Driver) is performing on stage.  It’s a brief but beautiful performance by Driver that is somewhat a throwback to the previous musical she starred in, The Phantom of the Opera.  The horror element is quickly set up as the film moves from the performance to backstage where we are witness to the graphic and intense murder of Kylie.

Moving ahead years later, Kylie’s children are a little more grown up and in the care of Roger McCall (Meat Loaf). Roger has moved away from Broadway and now runs Center Stage.  Just what is Center Stage?  It’s the ultimate summer camp for musical theater geeks (I say this with affection), whereas the camp attendees make it clear in their opening number, it’s the place where they can simply be themselves.  The Swanson children, though, are not attending the camp, but instead are earning their keep by working in the kitchen.

The musical numbers are what at first had me concerned about the film, but the filmmakers took a wise approach and made these musical numbers very tongue-in-cheek and funny.  The film pokes plenty of fun at those who are obsessed with musical theater but never crosses the line as to be insulting and instead keeps everything light and fun.

Where the drama kicks in is when it is announced what play is being performed; Camilla (Allie MacDonald) wants to audition for the role that her mother was performing at the time of her death.  This of course attracts conflict from other campers who feel someone that simply works in the kitchen and doesn’t even attend the camp shouldn’t even have a chance.  But with McCall in a financial bind and seeing the emotional attachment Camilla has towards the part, he seizes the opportunity in Camilla having the part and the attention the play could attract from critics seeing the young Swanson girl taking up the part that formerly belonged to her mother.

The horror element does take a break for a while as we watch the rehearsals for the production take place.  During this time we are given glimpses of a masked figure who sings his displeasure towards musical theater, but who is this masked figure?

What works so well is how the film takes the proper cues from the great slasher films of the past and seems to embrace the fun campy atmosphere that Friday the 13th and Sleepaway Camp brought to their films, though I couldn’t help but see a little influence from Dario Argento’s Opera at times.  This is an ambitious little project that succeeds when it easily could have fallen into the trappings of simply trying to please a particular audience.

Stage Fright is presented in an aspect ratio of 2.40:1 The 1080p image is arrived at with an AVC MPEG-4 codec at an average of 30 mbps.  This is a very sharp-looking film, and considering Magnolia went with releasing the film on a BD-50 disc rather than simply a 25, the extra space is utilized nicely to maintain the quality image delivering a flawless presentation.  The colors deliver a bright palette throughout, whereas when we are seeing the scenes play out on stage we get a solid range on the black levels.

The DTS-HD Master Audio 5.1 track for this film is a solid delivery for a musical production.  From the commentary and bonus material we hear about how the musical numbers were recorded live from the set and this allows for better authenticity than you’d expect if the performers were recording in a sound booth.  The dialog is clear throughout, and the stingers for the horror element add that extra bite for the few jump scares in the film.

Commentary with the director and co-composer:  This is a nice track that does have plenty of information and has very few moments of prolonged silence.  It’s not the best track I’ve come across, but it at least won’t put you to sleep.

The Making of Stage Fright: (9:18)  A very brief behind-the-scenes look at the film but is loaded more with interviews with the cast and crew.

Deleted Scenes: (3:43)  There isn’t much, but these scenes are worth checking out.  I’d like to talk about them, but they do heavily revolve around key plot points of the film I wouldn’t want to reveal.

In Memory of a Fallen Camper (1:59) A nice little tidbit about a camper who believes she is the daughter of a certain musical performer that shall not be mentioned.

The Evolution of the Set Design: (1:38) A comparison from sketch to the final product we see on film.

Stage Fright Sing-Along: (17:59)  Easily the highlight of the supplements, where we have all the musical numbers in the film with the lyrics for viewers to sing along to.

Interview with writer/ director Jerome Sable and Co-composer Eli Batalion: (17:07) Well, if the commentary wasn’t enough for you, here is a Q&A session between the two responsible for Stage Fright.

For a film that easily could have been a mess and just awful actually turns out to be a fun little movie with some solid laughs and a few jump scares.  I don’t foresee this building the cult following that Repo! The Genetic Opera has, but it’s still an entertaining film in the midst of so many sequels and found-footage films.

Brent Lorentson is a horror writer and film critic based out of Tampa, Florida. With a BA in Digital Film, he co-wrote and co-directed Scavenger Hunt. His short stories have appeared in various horror anthologies. In 2019 his short script Fertile Blood will be a part of the anthology horror film Slumber Party. He is currently working on his first novel A Dark and Secret Place set to be released in late 2019. Favorite Films: Taxi Driver, Fight Club, I Saw the Devil, The Wild Bunch, Dawn of the Dead, A Clockwork Orange, Pulp Fiction, Heathers, The Monster Squad, and High Fidelity.
Nymphomanic Vol 1 & Vol 2 (Blu-ray) Under the Skin (Blu-ray)