Posted in: Disc Reviews by Archive Authors on July 14th, 2014 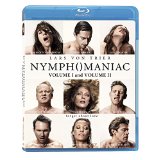 Nymphomaniac I and II are 117 and 124 minutes, respectively. There is a longer cut that may be released next year closer to 5 and ½ hours. The story is simple. It chronicles a conversation between two people. Joe (Charlotte Gainsbourg) is found bloody and beaten in an alley by an older man, Seligman (Stellan Skarsgard). He takes her to his sparse flat to care for her and help her. What takes place is a long conversation full of intellectual digressions about Joe. It slowly reveals what led to her downfall. Seligman is a sheltered bookworm who has a detached curiosity about her story.

The cast is impressive including Shia LeBeouf, Uma Thurman, Christian Slater, Jamie Bell, Willem Dafoe, Connie Nielsen, Udo Kier among others. The director is Lars von Trier, the famed Danish auteur and provocateur. Von Trier has always tried to find hidden and shameful areas of human behaviors in his films. Many of his films are rigorous exercises in the depths of human pain. They attempt to push expectations. They explore behaviors that seem too absurd to be real, but that is because most of us refuse to acknowledge certain parts of ourselves.

The film is very sober and serious with a classic artistic and intellectual intent. I say that because its goal is to get to the roots of human sexuality. It wants to explore the psychological compulsions that sends the human mind off in radically different directions in each person. We are all sexual beings, but all of us hide some part of what is inside us with a degree of shame. Seligman seems to have no sexuality at all, while Joe seems to be on an endless search to satisfy an unquenchable desire.

The film starts in her youth where from 2 to 12 she is slowly becoming aware of her sexuality. As a young woman she enters a competition with another girl to sleep with as many men on a train as they can. This kind of reckless sexual adventure escalates as she tells her tale to Seligman.

The most important aspect of Nymphomaniac for most people will be the explicitness of the sexuality.

I will say that anyone who sees this film would not think it is pornography. In its extended length you will see scenes that break the rules of what is acceptable, if you care about those sorts of things. The fact that it breaks those rules and the way that it does it will force you to confront how you feel. You may be repulsed or amused or bored or excited. I would agree with any of those reactions. The context in which the film displays various scenes removes them from the expected connotations.

Part of how you view this film will probably be colored by how you feel about its controversial director. Von Trier is variously considered to be many things. Some view him as a mad tyrant with his cast and crew. Some see him as a reckless clown with his antics in the media. He courts expectations of an audience, who view him as either a genius or a fraud. Some of his other projects which have won awards include Breaking the Waves, Kingdom Hospital, Dancer in the Dark, Dogville, Manderlay, Antichrist and Melancholia.

Great art will defy expectations, but it is a tightrope. It will force argument and encourage ridicule. This film definitely causes that reaction. That means it might very well cause you to laugh in derision. It verges on ridiculousness on many occasions. It is both intensely serious and absurdly funny. The film will work on different centers of the brain than simple skin flicks. Expect the film to push your boundaries The part with the professional sadist was the roughest for me.

One aspect that will surely enter your mind is the commitment of the actors who participate in activities that one would basically equate with prostitution. That is the mystery of sexuality. The script obviously intrigued all the A-list talent with its seriousness and intelligence, but it is a mystery. What did they all see in this project? We assume it appealed to those deep hidden parts of themselves they were trying to explore. Are we all really controlled by our impulses, impulses we don’t really understand? What will be in the 5½ hour cut of the film promised for later? Will it be more of the forbidden acts we all secretly want to observe like voyeurs? This four-hour cut definitely includes plenty to make its point.

Nymphomaniac  is presented in its original aspect ratio of 2.35:1. The 1080p image is arrived at with an AVC MPEG-4 codec at a pretty steady 39mbps. The film maintains its intended dream-like image quality. Colors are often washed out with plenty of light, almost to the point of looking like overexposed film. Remember this is all part of the film’s intended style. The high-definition image presentation is completely faithful. The picture is razor-sharp. There are times we almost wish we couldn’t see such detail. Black levels are average, but again, this is the look that was intended here.

The DTS-HD Master Audio 5.1 is not something intended to excite your ears. It serves the dialog and some interesting musical pieces. It’s a quiet audio presentation, to be sure.

Parts 1 and 2 are found on 2 discs. Each disc has a couple of extra features.

The Characters: (9:39) The actors talk about their take on their characters. They also offer their feelings about the film itself.

AXS TV – A Look At Nymphomania: (3:02) This is too short to be anything but a promo piece. It’s an extended trailer with interview clips often repeated from the first feature.

I don’t think the film is entirely successful, but it gets high marks for audacity.

Dawn of the Planet of the Apes Stage Fright (Blu-ray)