Posted in: Disc Reviews by Brent Lorentson on September 23rd, 2014 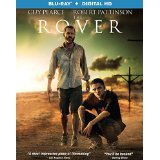 “You should never stop thinking about a life you’ve taken.  That’s the price you pay for taking it.”

In 2010 David Michod directed his first full-length feature Animal Kingdom. It was a critical success, and he went on to pick up a Best Director award with the Australian Directors’ Guild.  Now Michod has completed his sophomore effort, The Rover, which does explore some familiar ground with criminal families, but the film takes a more introspective approach to life and what matters most in the world when you believe you have nothing left to lose.

Ten years after the global economic collapse, Eric (Guy Pierce) travels the Australian landscape seemingly without any purpose beyond surviving to live another day. It’s just the kind of world you would have expected Road Warrior to have been before things got too out of hand.  While Eric is at a bar and relaxing with a cool drink, we see a truck roll and flip in the background.  Eric seems to be too lost in his own thoughts to care or even notice till he steps outside and watches as the guys escape from their truck and steal Eric’s car.

Eric takes pursuit, and instead of the high speed chase you’d expect, instead we get a more methodical and determined chase.  At this point you will start to question what is so special about this car, and for the world these characters exist in, just about any theory you come up with at this point is a valid one.  But needless to say, Eric doesn’t get his car so easily; after all, these are only the opening moments of the film.

Where the film takes a more dramatic turn is when Eric stumbles upon Rey (Robert Pattinson).  Rey was left for dead by those who stole Eric’s car.  It’s here where Eric discovers that Rey is the younger brother of one of the men responsible for taking his car.  Eric doesn’t care about Rey’s life-threatening injuries; he wants answers.  But in this unforgiving world Eric knows to get his car he needs Rey alive, so he takes him out to where he hears there is a doctor who can help them.

Rey, of course, is reluctant to help, but Eric makes it clear that his options are limited to either help or die.

As the film progresses, the reluctance Rey has towards Eric seems to falter, and in time it seems as though he views Eric more as his kin than his actual brother.  Sure, as we listen to Rey we understand he’s more than just a bit slow in the head, but what’s more clear is that he’s a soul who seems to just not belong in this unforgiving landscape.  Before this film I honestly didn’t think much of Robert Pattinson, but now I can’t help but wonder what is next for this guy.  This wasn’t just a solid performance by an actor, but instead this is a career-changing performance that not only will garner some awards attention to Pattinson but a role that finally allow him to step away from the shadow of the Twilight saga.

What is most striking with this film is the film’s cinematography matched with its beautifully unique score by Antony Partos.  I’m quite certain I’ve never heard a score like this, and it simply works perfectly with the action on screen.  Whether it is the car chase or simply a shootout, it delivers more impact than any score I’ve heard this year.

But at the end of the day, this is a film that asks the question: how far are you willing to go for what matters to you?  Both Eric and Rey face death numerous times but struggle onward in their quest to reach what awaits them.  This is a bloody and ruthless film that can at times be tough to watch and may have those pondering their mortality should an economic collapse really come along.  This isn’t just a world of anarchy, but a world without hope, and it never pretends to be anything different.  But then the end arrives and reminds us all that things are not always as they may seem.

The Rover is presented in its original aspect ratio of 2.40:1. The 1080p image is arrived at with an AVC MPEG-4 codec at an average 20-25 mbps. I’m a little disappointed in the low bit rate. There’s only one bonus feature on the disc, and I can’t understand why we’re looking at 20-25 mbps here. The high-definition image presentation certainly highlights the desolation of these locations. The light is harsh and washes away color. This is, of course, a style suited to the desert areas being depicted. The sharpness is quite good. You do get to see those pesky flies all over the place. They must have been a distraction to contend with for the cast and crew. Black levels are average at best. There’s a slight grainy filmic effect that does provide a gritty atmosphere for the film.

The DTS-HD Master Audio 5.1 is pretty minimalistic and rather intimate. There is little to no score throughout the film. There is a rather awkward noticeable exception when a throbbing score dominates any sound on the screen for 2-3 minutes. It’s a reflection scene that I found more distracting than thoughtful. Dialog comes through clearly here, and that’s where this audio presentation really shines. Guy Pierce talks in a whisper that requires a solid reproduction to hear. That you definitely get here. There’s not a lot of surrounds. A few ambient specs here and there.

Something Elemental – Making Of The Rover: (44:48) This feature gives us the usual cast and crew reflections. It’s more subdued than most, and I appreciate that it’s not so hype-loaded. There’s plenty of raw production footage as well. You also can’t find one minute of interview footage where the subject isn’t swatting away flies. Check out the backs of this production crew and it’s amazing how many flies accumulate on them.

I really enjoyed this film.  It’s already a frontrunner in my eyes as a contender for best foreign film of the year, yet I just don’t know if this is a film I could ever get excited about watching again and again.  Michod has delivered a beautiful introspective picture with some great performances by his two leads, but I’m not sure about the commercial appeal this will have for a wider audience.  At the end of the day this is Mad Max only overcooked in art house style.

Brent Lorentson is a horror writer and film critic based out of Tampa, Florida. With a BA in Digital Film, he co-wrote and co-directed Scavenger Hunt. His short stories have appeared in various horror anthologies. In 2019 his short script Fertile Blood will be a part of the anthology horror film Slumber Party. He is currently working on his first novel A Dark and Secret Place set to be released in late 2019. Favorite Films: Taxi Driver, Fight Club, I Saw the Devil, The Wild Bunch, Dawn of the Dead, A Clockwork Orange, Pulp Fiction, Heathers, The Monster Squad, and High Fidelity.
Hawaii Five-0: Season 4 (2014) Revelation Trail