Posted in: Disc Reviews by Gino Sassani on January 13th, 2015 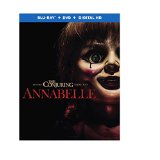 “Since the beginning of civilization, dolls have been beloved by children, cherished by collectors and used in religious rites as conduits for good and evil.”

The Conjuring was one of the best horror movies to come along in years. Why? Because it was a good scare with a story that didn’t totally insult our intelligence or leave us scratching our heads too many times. The movie also dealt with its own red herring of sorts in a possessed doll kept under wraps by that film’s hero couple. We’re treated to a tease of her story before we move on to other matters. It was used more or less to establish the expertise of Ed (Wilson) and Lorraine (Farmiga) Warren, who would play a central part in the film. After a rather chilling tease and more than enough establishing shots of the doll in a case with all sorts of ominous warnings, we moved on to the story that film was setting out to tell. No question James Wan delivered yet another frightening film that did not really involve the Annabelle doll at all, as it turned out. For the next 90 minutes we forgot about Annabelle, but after a while we went home, and the creepy image of the doll wouldn’t shake from our slumber. There was really only one thing for a studio to do, either to exorcise the distraction from our minds or mine a little coin in the doing. The result is the highly anticipated Annabelle.

My first surprise was that James Wan would not sit in the director’s chair this time. That honor fell to John R. Leonetti, who had worked as a DP with Wan over several of his films. Once you’ve seen the film, you won’t be surprised that he also served in a DP capacity on one of the Chucky films. As a director his resume is short, and after watching Annabelle, I’m afraid he still has a few things to learn.

My next surprise was that the Warren couple would not be taking part in the film. The sorority girl interview starts the film out mostly as it played out in the first film, but it isn’t this story we’re getting either. We are transported back to the late 1960’s for Annabelle’s origin story.

Here we meet a new couple just starting out in their lives. Mia (Wallis) is pregnant with the young couple’s first child. John (Horton) is a new medical school graduate looking to start his residency. He’s a bit stressed about the impending duties of both career and fatherhood. Things are about to get much worse than he could have ever imagined. To appease his moody wife he presents her with an early “baby” gift. It’s a large doll, part of a collection she has nearly completed. It’s a creepy-looking doll, and you’ll remember her from the first film. It’s a rather nice effect that the doll comes in a huge cardboard box that more than a little resembles a coffin. The couple are good Catholics who attend church every Sunday with their next-door neighbors. They are the kind of parishioners who the priest Father Perez (Amendola) comes to know and favor.

They live a somewhat idyllic life. They don’t lock their doors. One night it all changes. There’s some foreshadowing on the television to let you know what kind of thing is happening. A couple of Satanists kill their neighbor friends and also attack them. Mia is injured, but not seriously. The same can’t be said for the intruders. Both are killed as the woman Annabelle is clutching the doll. If you’ve seen the Chucky films, you have an idea of how these things work. The couple move to a new apartment, leaving the expensive doll in a trash can. The logic here fails me. Even if it did creep you out, as it should — I mean, dead Satanist dies holding the doll — we’re told it cost a small fortune. I assume most people would try to sell it and pass any supernatural mumbo-jumbo on to some unsuspecting sucker. Anyway… if it’s a spoiler for you that the doll doesn’t remain behind, you haven’t watched too many of these movies, that’s for certain.

But this possession is more subtle. Annabelle doesn’t begin to stumble around cracking wise with a blade in her hands. The film opts for the genuine scare tactic here. Electronic gear turns on its own. The usual creaky doors and momentary glimpses of the phantom Annabelle and the demon they were apparently attempting to summon offer the requisite jump scares. Of course, I think the doll collection itself is more than a little creepy. Doll collections like these always freak me out a bit. One is reminded of the famous episode of Seinfeld where George dates a doll collector with one particular object looking eerily like his own mother. There’s really no comedy relief here, and the film maintains its tense atmosphere pretty much from beginning to end. Much of it is very effective. A particular exploration of an apartment storage room provides the best stuff in the movie.

The film takes some of the familiar paths. There’s the new neighbor and bookstore owner, played by Alfre Woodard, who befriends Mia and her little baby. Together they surmise that the demon wants the soul of an innocent, and babies fill that prescription usually pretty well. The couple also goes to the priest, who is played by Stargate SG-1’s Bratac, Tony Amendola. He’s perfectly cast in the role of the devout and gentle priest who quickly realizes that the couple is in big trouble. Eric Laden joins as the detective who investigated their original attack and provides some exposition as to the motives of the attackers. These are rather emotionless scenes that act as a bridge between the scares.

Give credit to the f/x and production design here. The late 60’s environment was a creative tool to set up the emotion of the story. It was certainly a time when the innocence of our country was dying. Charlie Manson made a lot of small-town families start locking their doors for the first time. The war in Vietnam brought us closer to the sights and sounds of places less peaceful and serene than our Fathers Knows Best lives. The film does a wonderful job of imbedding us in that earlier paradigm and seeing it shattered not only for the couple here but the nation at large. I don’t think it would have been near as effective set in a more modern age.

Annabelle is presented in its original aspect ratio of 2.40:1. The 1080p image is arrived at with an AVC MPEG-4 codec at an average 25-30 mbps. The high-definition image presentation takes advantage of the shadows. The best stuff here happens in a dark that has a bit of a haze on top. The good news is that we still get rather powerful black levels even if the blacks are not particularly inky or dark. The demon figure is rather dark and stands out as the creepiest part of the image. Contrast here allows him to be extremely well defined against the misty darkness. The image is as sharp as you should expect. Detail is most impressive when you see the doll itself. Close-ups are very effective and very sharp. Check out the textures on the doll.

The DTS-HD Master Audio 5.1 gives a certain boost to the jump scenes. This is where some powerful but punctuated sub response comes into play. The jumps have a huge low-end jab to your senses. The dialog comes through quite clearly. Of course, the surrounds offer the usual faraway sounds and creaks that build atmosphere. The audio presentation is one of the strongest aspects of the film’s production design. You get quite immersed into the scares.

The Curse Of Annabelle: (5:30) Cast and crew tell some horror stories from the set. It appears some creepy things happened while filming the movie. There’s a lot of talk about the Warrens and the “true story” aspects of Annabelle even though this is a completely fictional story. We get a look at the real Warren artifact room, and the Annabelle doll there has its features blurred like you see on shirts with logos that weren’t cleared.

Bloody Tears Of Possession: (5:31) This is more of a technical feature. Cast and crew talk about filming the attack scene at the film’s beginning with as much of a one-shot as possible. Plenty of talk of equipment and shot setup here. The piece also contains quite the lovefest for director John Leonetti.

Dolls Of The Demon: (4:03) Cast and crew talk about their reactions to the doll prop. Apparently everyone was so afraid of it that no one accepted the challenge to take it home for an evening. That just tells me these guys were wimps. I’m certainly not afraid of no doll!

A Demonic Presence: (4:59) The demon creature is quite effective. It was designed and created by our friends at KNB, so that’s no real surprise there. You get a look at screen tests and how the whole makeup is applied. The guy who plays the demon is the same guy who wrote the score.

Deleted Scenes: (20:35) There are eight with a play-all option. The only material of significance here is the introduction in two scenes of a creepy landlord at the apartment building.

The wheels come off as the film falters to its flawed conclusion. The final moments appear to come from nowhere and aren’t really discovered throughout the film. A character does a brave thing, but with no idea that it would solve anything at all. Here’s where Leonetti lets us all down. He delivered a film rich in atmosphere and effective scares. The characters are sympathetic enough, but his solutions come from nowhere. There’s also a couple of young kids who provide a creepy bit of prophetic drawings, but no follow-up or connection is made to any other part of the film. In the end Leonetti gives us plenty to sink our teeth into but never ties it enough together before it’s suddenly and almost inexplicably over. Annabelle is a film that could have stood with its predecessor except for an effective final act, “in my almost expert opinion”.

Gino Sassani is a member of the Southeastern Film Critic's Association (SEFCA). He is a film and television critic based in Tampa, Florida. He's also the Senior Editor here at Upcomingdiscs. Gino started reviewing films in the early 1990's as a segment of his local television show Focus. He's an award-winning recording artist for Omega Records. Gino is currently working on his 8th album Merchants & Mercenaries. Gino took over Upcomingdiscs Dec 1, 2008. He works out of a home theater he calls The Reel World. Favorite films: The Godfather, The Godfather Part II, The Body Snatcher (Val Lewton film with Karloff and Lugosi, not the pod people film), Unforgiven, Gladiator, The Lion King, Jaws, Son Of Frankenstein, The Good, The Bad And The Ugly, and Monsters, Inc.
Men, Women & Children (Blu-ray) Tyrant: The Complete First Season