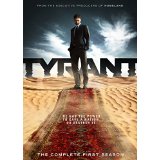 Both temperaments are well represented throughout the first season of Tyrant, FX’s Middle East-set family drama. I say “family drama” because even though the show features plenty of political power plays and double-crosses, Tyrant is at its best when it focuses on the rotting and crumbling of the central Al-Fayeed clan. Call it Godfather-lite.

Ok, so I should definitely pump the brakes on likening this show to The Godfather. (Tyrant is more like Caffeine Free Diet Godfather Lite.) It’s just the comparison is hard to ignore when you consider that the series opens with a prodigal son returning home for a lavish wedding, and the first season finale includes a brotherly betrayal followed tense fishing trip. (In a little while, I’ll get into why Bassam Al-Fayeed is no Michael Corleone.)

Bassam (Adam Rayner) is the younger son of Khaled Al-Fayeed (Nasser Faris), the long-time dictator of fictional Middle East nation Abbudin. A California pediatrician who goes by “Barry,” Bassam has been in self-imposed exile for 20 years and has a family of his own: wife Molly (Jennifer Finnigan), and teenage children Sammy (Noah Silver) and Emma (Anne Winters). Bassam decides to break his exile and return to Abbudin to attend a family wedding.

Volatile older brother Jamal (Ashraf Barhom) and his wife Leila (Moran Atias) have a son who is getting married. When a terrorist plot from a group of frustrated revolutionaries threatens the wedding, Bassam steps in and offers a level-headed solution. Soon after, a family tragedy compels Bassam to stick around Abbudin so he can help his brother and keep the peace in his homeland.

Speaking of Homeland, Tyrant is created by Gideon Raff, who produced the popular Showtime political thriller and created Prisoners of War, the Israeli drama that Homeland is adapted from. Raff once again largely uses the Middle East as a colorful, complex backdrop to tell a different kind of story. (Whereas Homeland is a spy thriller/kooky romance, Tyrant is a family drama.) Tyrant show invokes names like Hussein and Gaddafi, and Abbudin’s dictator sees himself as a sort of last man standing in the region. Abbudin is meant to be an amalgam of several different Middle Eastern nations, which gives the show license to not get too specific about politics. (Weeds star Justin Kirk pops up as John Tucker, a U.S. diplomat to Abbudin who sees potential in Bassam.)

Nevertheless, the focus of Tyrant is squarely on familial tragedy. (With a strong emphasis on fraught fraternal relationships.) Once Jamal assumes power, he is pulled in opposite directions by the compassionate, democratic Bassam and by his wife Leila, who wants him to be the all-powerful future dictator she married in the first place. Meanwhile, Bassam’s own family unit starts to feel the strain of life in Abbudin as Molly worries about the stress on her husband, while one kid is more receptive to the idea of being royalty than the other. That alone would be the basis for a tense, tight family drama. Unfortunately, Tyrant tacks on soapy, wholly unnecessary flourishes, like Bassam and Leila sharing a secret from the past, one of Bassam and Molly’s kids being closeted, Jamal taking an interest in his son’s wife, etc.

A bigger problem is that fact that, if Bassam is supposed to be Michael Corleone, then Rayner is certainly no Pacino. To be fair, Tyrant could go on to run for many seasons on FX, and the character of Bassam may develop to the point that he’s not even recognizable years from now. (Just like it’s startling to watch season 1 Walter White before he really started Breaking Bad.) So 10 episodes might be a little early to conclude that a character is a total dud. Unfortunately, Bassam is easily the least interesting person on screen for these particular episodes…which is a problem, considering he’s the main character. Rayner recedes into the background even when he should be commanding the screen as someone whose power and influence is on the rise.

And it’s not simply because Bassam is “the nice one” to Barhom’s flashier work as Jamal. (Sonny to Bassam’s Michael.) Barhom certainly taps into the dangerous side of his character, but he also channels into the wounded vulnerability of Jamal. (There are many flashbacks to a traumatic moment from Bassam and Jamal’s childhood.) Atias is sultry and manipulative as Leila, while also revealing a seemingly genuine affection for her often-monstrous husband. Finnigan, on the other hand, is just as much of a drip as on-screen hubby Rayner. The late-season arrival of Wrenn Schmidt (Boardwalk Empire, The Americans) as Molly’s flighty sister didn’t help make Molly more interesting. (Or add anything to the show at all.) Instead, the recurring players who stood out were the ones who offered a more live-in quality to their performances. I’m specifically thinking of Alice Krige as Bassam and Jamal’s massively conflicted mother, and Raad Rawi as their more militant uncle.

Tyrant: The Complete First Season features all 10 season 1 episodes on three discs. Disc 3 also contains a behind-the-scenes featurette (“A Family of Tyranny”) and deleted scenes. Season 2 is set to premiere this summer, and I’m interested to see if they-re-cast the role of Bassam how the show deals with the finale’s climactic coup. Tyrant can be as messy as the region it portrays, but the potential is there for rich, Shakespearan family drama.